“This is magnificent!” exclaimed Kammler. “To think after all these decades our fathers’ and grandfathers’ work has come to fruition!”

Kammler, Bormann, Müller, Edda, and the gray-haired old men were getting a VIP tour of the Pyramid from Richter.

Making their way through the grand gallery, they were overcome by an ironically soothing hum and bathed in psychedelic light from the various crystals Herr Richter’s team of scientists and technicians had fabricated or unearthed based on secrets revealed in ancient tablets. The crystals, constructed with the scalar fabrication technique of the Mark IV Bell, gathered energy from the very ether and stored it in their crystalline structure. Excess energy was emitted as visible light and radiation. Thus, they were all dressed in protective suits.

“These were among the most interesting components we uncovered,” Richter stated indicating the white, almost weightless spheres recovered from the Baghdad Museum. “These are resonator arrays that will enable us to amplify and tune the electro-acoustic resonances that will wreak death and destruction if our demands aren’t met. They are made of a precise combination of orbitally re-arranged monatomic elements dominated by the platinum series metals.” 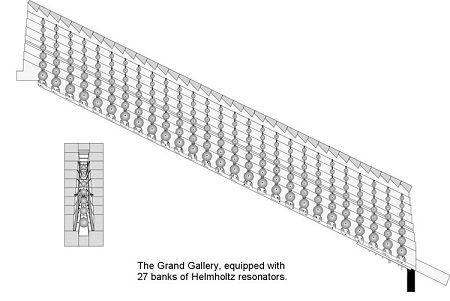 Helmholtz resonators in the Grand Gallery

“It is an ancient technology, but we have our loyal brother Walter Gerlach to thank for rediscovering it. Note how the spheres fit perfectly into the niches carved by the pyramid’s ancient builders millions of years ago. And to think Egyptologists think they were carved for statues! Stolen by tomb raiders! In fact every niche in the pyramid Egyptologists told us was for accommodating statuary or figurines is tailor-made for the crystal or other piece of technology designed for it.”

“What are these large stone slabs resting in these slots?”

“Those are baffles, also for tuning the resonance. By raising or lowering them, we can dampen or amplify the acoustic-like longitudinal waves that pass through the grand gallery. In fact, it’s not a ‘gallery’ at all but a tuning chamber.”

“How can you be sure all of this will work?”

“In fact, we are not 100% certain. To be that certain, we would need the so-called Tablets of Destinies, which have never been found. They were secreted away by Ninurta, also known as Nimrod in The Bible, after the second pyramid war, and were never found again. These Tablets of Destinies, to the best of our knowledge, contained the keys to operating this marvelous device with resonance tunings and settings for vast expanses of the very cosmos, from our own planet, planets within our own solar system, the galaxy, even far distant realms of space…”

He was cut off my Müller. “A long, long time ago, in a Galaxy far, far away…”

“Your little joke has more truth than you might suspect Herr Müller. But to continue, we did discover a partial transcription with relevant resonance tunings to a few places on earth that will enable us to cause horrific regional catastrophes. We, of course, will call these catastrophes with precision in advance to show that we do indeed have the power to cause and direct them. In fact, some State powers like the US, China, Japan, Russia, France, are already experimenting with such technology. This will put us centuries ahead of all of them.”

“Herr Richter, I must confess, this is a bit unnerving. Are these flimsy suits enough to protect us from such a redoubtable weapon?”

“Do not worry. It is not at full strength. While the visible light emissions are impressive, there is very little other radiation to be concerned about. Just some low level UV and X-ray emanations. Once the capstone is in place and we initiate the weaponized resonance, the interior will be drenched with devastating gamma ray emissions that will kill any living thing that is unprotected. And that soothing hum that has you all so calm will crescendo into the most paralyzing and awesome shriek ever heard on Earth. Well, perhaps it is more of a roar, well, no, something like a shriek and roar combination, or blare, maybe it’s more like a blare. In any case it will be a most unique and terrifying blast.”

“We understand, Herr Richter. It’s beyond words. The device’s operators?”

“We have just enough suits for them; in fact they are more like capsules. But getting back to my earlier point, once the world is held hostage, we will continue the search for the Tablets of Destinies, which will also enable us to direct the creative power of this giant machine as well and create or re-create the world as we like.” He took a good-natured, half-comic bow.

“It is not quite operational. I have a short video presentation on how it will work for you back at the hotel. We have some finishing touches to put on, and, of course, the capstone will be the final essential element. That will be in place as of midnight, New Year’s Eve. And, of course, barring any mishaps. My team depends on you gentlemen to keep any White Hat operations at bay that are trying to prevent us.”

“Indeed, but I remind you that from our perspective we are the white hats. Why do you mention this?”

“It has come to my attention that someone is secretly moving arms into the area. They aren’t using any of our agents nor purchasing from any of our sources. Therefore it must be a group of White Hats, pardon me, vicious meddlers.”

“Interesting. Thank you for the information. We will continue along those lines immediately after the tour.”

“Yes, let us now continue to the so-called King’s Chamber so you can see what we did there. It is in fact a phase conjugation mixer in which the destructive beam is cohered and then pumped to its target through the capstone. What you are about to see, gentlemen, you will not see on the National Geographic Channel…”

I am curious to know about King’s Chamber. Thanks for sharing.

wait till you see what happens.