The salvage operation continued amidst the alarm, while the colonel dispatched search teams to catch the perpetrators.

“All right, teams, we’re looking for the folks who stole a vidcam and a clipboard. Both contain valuable information that must be returned to HQ with this thing we just pulled out of the ground. Recover the camera and clipboard by any means necessary. Am I clear?”

“Yes, sir. How many people are we looking for?”

“We don’t know. Whoever it is, or they are, they must have gear and water for survival in the desert. The gear will weigh them down. A vehicle will make a dust cloud. Boots should leave obvious footprints. There should be a campsite. They may have lights for navigation at night. Look for any clue that will lead you to them.”

He scanned the search teams for any other questions. There were none. “OK, Hammer and Thor teams, go out the perimeter where the theft occurred and look. Huginn and Muninn teams search the other three sides. All of you are to coordinate with the chopper when it arrives.” Huginn and Muninn were Odin's ravens

Men in SUVs lumbered into the desert spraying clouds of dust from under their wheels.

This was the “bigger hammer” more so than the “Thor’s hammer” approach to search and destroy. If you can’t track, you send out a whole lot of people to look in every nook and cranny or perhaps to “flush your game” and hope for results. Even for people wanting to be found, the method often fails. But all this gang had were hammers, and the colonel sent out the biggest one he could.

Neither their headlights nor the door-mounted spots could find any trace of the boys. They scared up a lot of rodents, flattened a few snakes, and chased off the odd fox here and there. The clipboard and camera thief thieves could not be found. When a black, unmarked helicopter joined the chase, it didn’t help. Everything the FLIR picked up that wasn’t in an SUV had four legs.

As dawn broke, the search teams returned to camp and helicopter was out of fuel.

Teams with specially contrived poles maneuvered the crystal away from the hole and secured it, still levitated, to a hastily constructed rack. The rack hung, suspended a few inches above the ground from the base of the crystal. Using the rack, the men guided the large glowing crystal over the hike back to the house. There a flatbed tractor-trailer had been parked for years waiting for its cargo.

The rack was secured to the bed while another team carefully constructed an 8x8x8 wooden crate to fit over the crystal. The size of the crate was as much to disguise the size and the shape of the object as for safety. Room was needed for the walls to be lined with a layer of thick rubber mats over another layer of special lead-based ceramic tiles. It was only just now being constructed because nobody knew exactly what would come out of the hole or how big it would be. In the meantime, a tarp was thrown over it.

The rubber mats and ceramic tiles were a lesson learned from the German physicists that worked on Die Glocke, otherwise known as The Nazi Bell, under Hans Kammler’s SS secret weapons program. It was an experimental device shaped like a bell (glocke in German) designed to test concepts in torsion energy and anti-gravity propulsion, and it emitted strange forces when operating.

The first group of scientists to power it up died sudden, painful and agonizing deaths. Subsequent experiments revealed that the Bell had strange effects on living tissue from crystallization to decomposition into disgusting black goo. In their evil twisted wisdom, the Nazis only permitted slave laborers from the neighborhood concentration camp to enter the room where the device was tested. The rubber mats and ceramic tiles protected the scientists who remained outside. 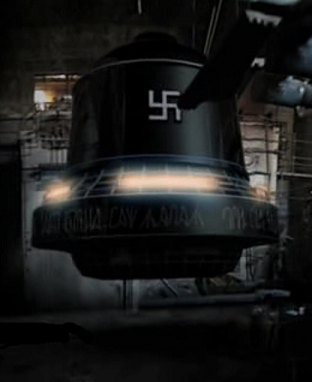 Now having retrieved a self-luminous giant crystal from a bottomless hole, the group at the hole didn’t really know what to expect or what effect it would have. They surmised that what worked to contain the strange emissions from the Bell might work for this thing as well.

After the laborious process of building the crate. It was lowered over the object and fastened to the rack. The remaining space was filled with soil before fastening on the lid. The weight of the soil alone would help conceal that the cargo was in fact weightless. It rolled out of the gate just as Thorny and One Flare emerged from their scout pit. They raced up to a higher ridge and perched themselves where they watched until it was out of site.