The four sub-henchmen stood panting with their hands on their hips.

“Idiots. Go find a laundry cart, or something.”

“Better make that two,” added Mr. Silva. “That other wildcat might prove useful.”

Edda gestured commandingly with her hand to shoo the men.

“Haven’t you ever heard of chloroform?” she asked recovering herself.

“What? And ruin all the fun?” smiled Silva. He stroked Carrie’s leg, causing her to roll away and kick ineffectually against her bonds.

The girls, exhausted, finally lay limp, but conscious. “There. You see?” indicated Silva.

The men came back with a couple of laundry carts full of towels. The towels were taken out and the girls put in, and the towels put back on top of them.

“Now hurry. And be cautious about it.”

The elevator doors dinged and Thorny and One Flare stepped out as the men pushed their cargo in. The two parties glared furtively at each other as they changed places.

“That’s awfully weird. They don’t seem like the kind of guys who go pushing laundry carts around.”

“That’s for sure. This whole place is weird.”

Edda was just disappearing down the stairwell as Thorny and One Flare approached the girls’ rooms primed for romance. They knocked and called out. “Mary! It’s me!” “Carrie! You there? Open up!”

They looked at each other and their eyes popped. In unison they kicked the doors but they hardly budged.

They dashed after the kidnappers, sprinted through the lobby, and sprung through the restaurant.

They danced and dodged their way through the dining room and kitchen and out onto the loading dock. But it was too late. Mr. Silva was speeding away in an ambulance and held out a long, tall middle finger to the boys through the driver side window. The girls struggled against their bonds on the floor while the four lackeys guarded them on every side, every once in a while poking them with a stick.

The boys leapt off the dock and ran to the Westfalia. One Flare started it up and took off in the direction of the ambulance.

“God, I feel Shaggy and Scooby in the Mystery Machine trying to rescue Josie and the Pussycats,” Thorny commented. “You mean Daphne and Thelma.” stated One Flare without breaking his intense concentration on the road.

“No I don’t. They weren’t in a band, dumbass! Josie and the Pussycats was a band! Gyawd, didn’t you watch those when you were a kid?” 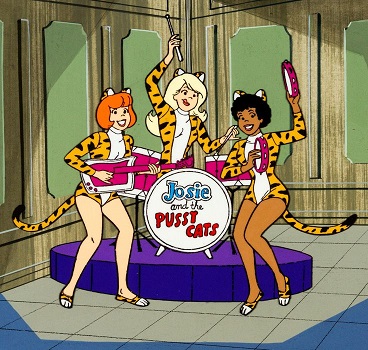 "No. But I saw the movie. Those chicks were hot." One Flare slowed the Westfalia and came to a stop on the side of the road. “It’s no use. We’ll never catch ‘em in this.”

great novel, i love all the writers on steemit. They have such creative minds, do you read any of @alexbeyman 's novels?

Thanks for reading! Alex's handle sounds familiar. I think I'm following him, but he was writing mostly about writing lately.

he has been writing sci fi novels, i can't recall the name of it but it is a really interesting novel, you should definitely check him out

Interesting part! I can't wait for the next part. Thanks.