The girl with the dangerous idea was Carrie Tsosie. She was slim and dark with long black hair with blue streaks dyed in, and a mischievous glint in her eyes that never faded.

She spent weeks at the top of the mountain watching the patch of poison ivy Kelvin, Thorny, and One Flare had crawled through. All the while her idea gestated in her mind. When she noticed the leaves moving towards her, she watched more carefully, got up and listened, and put out her hand to feel the air, sniffed. When the leaves seemed to recede, she got up, listened carefully, and put up her hand to feel the air, sniffed. Occasionally, Daryl or her friend Mary would join her. Sometimes Thorny or One Flare would go too. When she understood what was going on, she left.

A few days later, our new crew of misfits returned to the the mountaintop to wreak their unique brand of havoc on the evil inhabitants within.

They carried big bundles of poison ivy vines they had gathered from all over and dried in in the sun. They placed them at the base of the patch guarding the ventilation shaft. They'd also toted large sheets of cardboard.

“Now there's no real pattern to this,” began Carrie. “It seems like they suck in fresh air whenever they need to, and blow out stale air whenever that’s necessary. We'll just have to wait until the right moment.”

“I can hardly wait for the fun to begin,” giggled Daryl.

They heard a faint rustle. Carrie indicated the subtle movement of leaves and explained how they indicated the base was blowing out stale air. Thorny was getting excited that a chick with blue streaks in her hair was as interested in poison ivy as he was.

“When will it suck again?”

“I got something for ya ta suck right here.”

“Do men ever not talk about their penises?” asked Mary with mock shock.

“Well, look, we may be a couple cool punk Native chicks to you, but here on the Rez we still like to keep our dignity. Keep it for your men's circle.”

“Alright, alright. You're right. We're sorry. We'll keep it for our men's circle.” Their apology was reluctant but genuine.

“It might 'suck' again,” stated Carrie with a mischievous glance at the boys, “anywhere from 20 minutes to a couple of hours from now. Based on smell I'd say this is a 20-minute suck.” She eyed Thorny.

“Sounds good to me.”

The girls eyed each other superciliously in response to the boys obviously ironic tone. Women are subtle in their ways of relationships, and therefore more often victorious, and women from more traditional cultures are far more masterful at it than so-called modern women.

They sat on their haunches carefully watching and listening to the poison ivy. Finally the leaves rustled ever so faintly and bent ever so slightly towards the shaft.

Daryl sprang forward with a kind of miniature homemade blowtorch and torched the the dry bundles. The others fanned the flames with the sheets of cardboard. The flames quickly engulfed the live green poison ivy and hardly a wisp escaped. A thick choking cloud of urushiol-laden smoke engulfed the denizens of the secret lair. Inside, panic ensued. The fire control systems came on initiating the alarm and sprinkler system. Hunched coughing workers scrambled to find the source of the smoke. People shouted at one another and raced for gas masks. But it was already too late.

The urushiols had gotten into their lungs and been identified by the Langerhans cells. These in turn raced to the lymph nodes to alert each and everyone's T-lymphocytes to to the chemical invasion. The T-lymphocytes raced in turn to the point of contact and began producing cascades cytokines. In layman's terms, the allergic reaction had already begun, and in the worst place possible--the lungs and eyes. 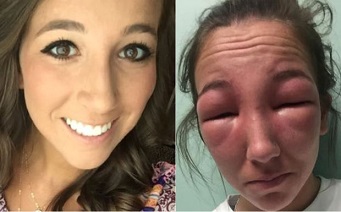 before and after poison ivy

“What the Hell is happening?”

“It's coming from ventilation shaft 9! There must be a brush fire we missed!”

“You idiots! You're supposed to watch for that!”

“Instrumentation didn't pick anything up until a few seconds ago.”

“Get out there and extinguish it, you morons!”

A burly guard donned a gas mask and headed up the shaft with a fire extinguisher.

Meanwhile, on the mountaintop, Thorny and One Flare had just high-fived.

Daryl took a break from heaving laughter to say, “We better get out of here. Now.”

The group shot down the slope at full speed, galloping like the local antelopes and struggling to keep their footing. It was then that Carrie tripped on a stone and tumbled. She lay there momentarily stunned and catching her breath. At that moment, the huge hulking Nazi in the gas mask emerged through the smoldering vines just in time to glimpse the arsonists. He jogged over to Carrie and stood over her like some kind of google-eyed monster about to devour his quarry.

“Dude, can you hit him from here?” The gas mask Nazi was lifting the fire-extinguisher over his head as if to finish Carrie off. Thorny and Daryl sprinted toward them as if in defiance of the laws of gravity, arms pumping like the rods of a steam locomotive.

Carrie blinked drowsily in the sunlight and groggily beheld the sinister giant looming above her.

One Flare swung his sling once around and released.

Carrie saw the giant swoon, and then collapse. The extinguisher just missed her head as it fell. One Flare connected with just enough thump to break a lens in the gas mask and knock the villain unconscious.

“Every time,” he nodded as he viewed his handiwork in the distance.

Daryl bent over the giant and felt his pulse. Then with his knife , he slit his throat. Thorny winced as the blood pooled around his head trickled down hill in small rivulets.

“You white men were always such pussies,” teased Daryl.

Thorny did a face palm, then gesticulated in circular motions with his hand to indicate they should hurry.

Two more guards just coming out of the tube through the smoldering brush saw the futility of the situation and skulked back into their lair.

They then got Carrie on her feet and ran all the way home.

“Oh my God!” heaved Mary. “That was way too fucking close!”

“It's never too close if you're still alive,” quipped Daryl.

Carrie pulled a couple of ice packs out of the freezer and put one on her knee and one on her head. “Just closer than we would've liked.”

The next day, the Albuquerque Journal ran the following headline:

Thank you for reading! Upvote back atchya.