A sour-faced Iraqi woman stood impatiently by the vault door when she heard the first heavy steps of the approaching team on the stairs. She stepped out of the vestibule to check. As soon as Edda got to the door, Dr. al-Mutawalli started for the lock with keys in hand. Edda touched her wrist and took the keys herself.

“Thank you. You may go.” Edda was dispassionate but careful about her manners.

Al-Mutawalli was cut off by the Valkyrie. “You may go! Please. I will not ask again.”

Al-Mutawalli looked confused, then scared. She cast pleading looks to the assembly, opened her mouth to speak, but then thought better of it. She turned and dashed up the stairs, past the men wreaking havoc with the exhibits, and out of the museum. Müller eyed her cheerfully as she left. As the vault door swung open, the thieves outside were bathed in dazzling, blinding supernatural light.

The adjutant, immediately behind Edda and squinting through his fingers, asked, “Can you see anything?”

The light began to diminish, as if it was a gas previously under pressure that was now dissipating. Edda and her adjutant slowly lowered their hands, lifted their heads, and widened their eyes. The adjutant, who was shorter, craned for a look over the taller woman.

She swung to the side and the adjutant stepped into the room making broad fast scooping motions with his hand for the men to hurry. Some men lurched for the tackle boxes which they emptied haphazardly into sacks. Others approached in awe a series of orbs or spheres that sat arrayed on rubber-lined shelves. Still others went for large crystalline objects with odd geometric shapes.

The orbs and crystals were meticulously counted and compared to a checklist on the adjutant’s clipboard, and each was put into its appointed compartment in the crates. The spheres came in eight different sizes with the largest being about 36 inches across and the smallest ones about half of that. There appeared to be 27 sets in all.

Somebody tapped one of the orbs with the butt of his knife to gauge what it was made of. It made a sound that was neither plastic nor metallic, nor ceramic, and yet somehow a combination of them all.

“Be careful with those!” barked Edda.

“What the Hell are these balls made of?”

“Do not play with your balls!” she half announced to the entire team and half a direct order to the man in question. “That is for the Doctor to do!”

The men smirked and giggled as they packed up their cargo. In fact, the Doctor was a mysterious physicist named Doctor Richter but Edda’s inadvertent double entendre wasn’t lost on them.

Several of the crystals were self-luminous, with no apparent power source. Their fanciful light reflected off the shiny spheres. The combined effect of their luminescence produced a dreamlike green glow that was gradually muffled as the crates were sealed. The men eyed one another warily. Edda looked as if she “felt” something, paused her operations momentarily, then came to.

The men responsible for crates hoisted them and made for the stairs, while the men responsible for security mounted their weapons. Prancing up the stairs with the loaded crates one man whispered through the side of his mouth to his partner, “These crates don’t feel any heavier than they did empty. In fact, maybe a little lighter.”

“You’re right. I have a feeling this thing is really big.”

“Takes a lot of balls to pull something like this off, right in the middle of a war zone.”

“And we got ‘em, right here in this crate, brutha.” They broke into a spontaneous but cheerful parody of an old wartime song, fumbling at first, but then picking up the rhyme.

“Hitler, has now got all the balls,
George Bush, will get no balls at all.
None left, after our theft.
Now who’s holding who by the balls?”

They sang all the way to the trucks. As the last man from Red Team exited the museum, Green Team defiled behind them.

Müller paused at the museum entrance where he met a man in civilian clothes over which was a flak vest and blue press helmet. He produced a folded paper from one of his pockets and handed it to the reporter, who was from Deutsche Welle.

“Here. This is the article we need published. You can take any liberties you want with it but these highlighted details must be in it.”

The reporter perused the article. “Baghdad Museum plundered….Appeared to be American forces….thousands of cultural artifacts missing….I see. Yes. It’ll be on the wire within the hour. Heil Hitler!”

Müller flashed a scowl at the man, who started with fright. And once again, slowly and gradually, that sly, evil mischievous grin took form upon his face. Then in his best Siegfried from Get Smart impression, he quipped, “Zis is ze 4th Reich, Schtarker. Ve don’t ‘Heil Hitler’ here!” and ran off bellowing with laughter. 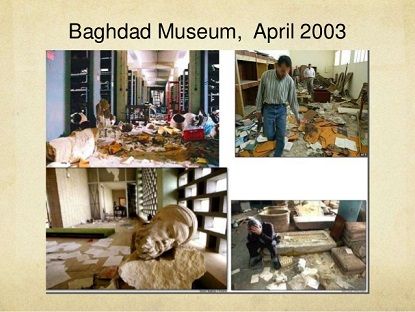