Frank and Melissa Shorley were both former students of Dr. Faro’s. After graduating from SDSU, they tied the knot and bought a large tract of land in the Nevada desert with an inheritance. There they intended to develop Tesla technology for industrial and consumer use. The wide-open spaces in the Nevada desert not only afforded them a measure of privacy, if not secrecy, for their work, it allowed for plenty of margin for error in case any energy experiments got out of hand. They didn’t want to go around killing livestock or people if they screwed up.

They were out in the desert playing with a large impulse magnifying transformer one bright summer day when such a screw up occurred. An impulse magnifying transformer is a device that shocks local systems into non-equilibrium with huge electrical discharges. It was discovered by accident, as so many things are, during World War II at a humongous arc welding facility built by the Navy.

In fact, this is one of the strangest events in the history of science ever recorded, and yet largely unknown. With the war in full swing the Navy was under enormous pressure to produce ships. They built a huge facility for arc welding armor-plated hulls. It was powered by huge capacitor banks that were so powerful, workers could not be in the capacitor room while the welders were active. When the welds were sparked, the incredibly high voltage released a storm of X-rays. But that wasn’t all.

Strange and inexplicable phenomena occurred. During the electrical blast from the welders, an “optical blackout” occurred. At first this was attributed to retinal bleaching, a natural biological response to sudden flashes of intense light. This explanation fell apart when the Navy’s investigators realized it would also show up on film.

But it didn’t stop there. Workers reported that tools left in the capacitor room would disappear without a trace during the blackouts. They would go into retrieve the tools once it was safe, and the tools would be gone! The Navy, having little tolerance for woo-woo, set out to test these reports. Investigators deliberately placed objects in the room and filmed what happened. Lo, and behold, the objects vanished in the blackouts! At first they thought the objects were being vaporized by the X-rays, only no trace gases from their vaporization remained in the room either.

The Navy called in Thomas Townsend Brown, who the Navy apparently considered more of an expert in weird, freaky space-time warp phenomena than Einstein. Brown himself had had a very interesting career at Caltech and Kenyon College and went on to perform incredible sorts of scalar research in gravity for the Navy before the war. Dr. Brown carefully observed the arcs created by the welders. What he surmised is that the explosive force of the plasma arcs drove all atmospheric gases out of the arc, creating a momentary vacuum that hindered the complete discharge of the capacitor bank. The tsunami of plasma discharging across vacuum space caused space-time to warp in an electrogravitic interaction. Around the explosive electrical impulse, local space was collapsing. The blackout was caused by light being sucked into the collapsing space, and if strong enough, unable to escape the collapsing space, the blackout would spread as more and more light was sucked in in the vicinity. When the effect was intense enough and slow enough, it could actually modify matter, which could literally blow apart in fierce, redoubtable explosions of sparks. The matter would be ripped apart at the atomic level and even the trace gases would be drawn into the void, leaving nothing in the room to detect.

These vacuum arc effects had been described decades earlier by Nicola Tesla while working on his impulse magnifying transformer. However, he had never gotten to the stage of disintegrating chunks of the local matter.

Wisely, the Shorleys decided to do their research with this in the middle of nowhere in the Nevada desert. On this particular day, they were upping the ante. They had added considerably to their capacitor bank and wanted to see what kind of blackout effect they could get. Using a remote control in the control room, they threw the switch, and an area the size of a football field went dark all around them. “When the lights came back on,” their machine was gone and a deep, black hole 30 feet across stood in its place.

Frank stepped out of the control room with Melissa on his shirt tail and her finger in his rear belt loop. The Shorleys were seized with bewilderment, jaws agape. That wasn’t supposed to happen.

They squinted towards the hole as if it were a desert mirage. They beheld one another’s amazement. Melissa reached out and lifted Frank’s jaw back into the closed position. They turned again in unison to behold the hole, this time wincing at what they’d done.

Twisting his body, but not his head, Frank reached back and grabbed a stick by the control room door they kept handy for rattlesnakes. The Shorleys approached the hole slowly, poking the ground ahead of them as they advanced. Upon reaching the rim, they peered over and down. Black. 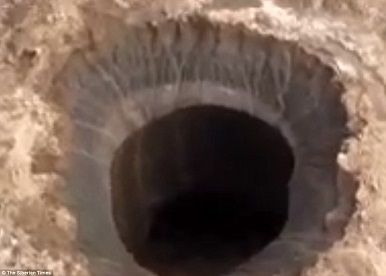 Melissa bent over and picked up a stone. She dropped it in the hole. They listened. Five seconds. 10 seconds. 30 seconds. Nothing.

“Maybe it was too small to hear,” offered Frank tremulously. He bent over and picked up a bigger stone the size of a football and heaved it over the lip. They listened. Five seconds. 10 seconds. 30 seconds. Nothing.

“Well try a bigger one!” opined Melissa as much out of fear as scientific curiosity.

Frank looked around for the biggest rock within easy reach. He found a regular boulder he could hardly pick up and carry. He dropped it at the edge of the abyss.

“Did you hear anything?”

Hello @thornybastard! You have made it interesting and therefore good learning experience for me. Thank you!

Glad you are enjoying it!