They woke up under their tarp which they’d rigged over a bed of pine needles. The air was crisp and clear, the worst sort of weather for the kind of operation they were about to run.

One Flare pinched his eyes with thumb and forefinger to wipe the sand out, leaned up on an elbow and saw Thorny and Kelvin just waking up too. “Damn! I have to wake up with you two instead of one of those Apache girls,” he joked.

They started getting up and shaking out their bed rolls and getting their outerwear on.

“I think you’re trying to appreciate them a little too much,” observed Greaves, the elder of the trio.

“There are no limits to my appreciation.”

“Yeah, I’ve seen how limited it is,” added Thorny. “In fact it was hard to see at all.”

Greaves snickered, “Is everything a double entendre with you guys?”

The pair looked at each other. “Pretty much.” “Yep.”

Just then the old shaman and his apprentice approached their camp. He was carrying something.

“Morning! How you fellas this morning?”

“Never slept so well in my life.”

“I made something for you fellas. These are medicine pouches.” He placed a small pouch of some kind of animal skin hung on string of the same material around their necks. “Make sure you keep them on.” 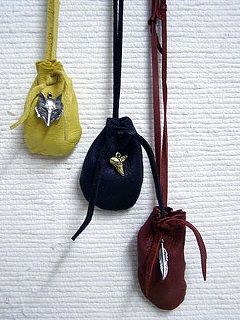 three simple medicine pouches. It's what's inside that matters.

They lifted them in their hands to inspect them and asked, “What’s in them?”

“Medicine. That’s why we call them medicine pouches.”

“Do we wanna know what’s in them?”

“I don’t know what you want. But if I wanted you to know, I would have told you by now.”

“Go to the mountain you went to last night. You’ll find what you’re looking for there.”

They looked around. “That mountain?”

“Is that the one you went to last night?”

“If you know that then, why are you asking me? As soon as I gave you those pouches my job finished.”

The old shaman and his apprentice started heading back down the hill when they stopped. They old man turned around but was only visible from the waste up.

“Dinner’s at my niece’s house,” he hollered. “7 o’clock.” Then he disappeared down the hill.

Sounds like the new Matrix to me :) hahaha Nice written, do you have more plans?