The Giza Death Star Revisited: A New Steemit Novel Based on the Work of Joseph P. Farrell Ch. 1

The heavy canvas tarpaulin rippled in the wind over their heads as dust blew in and swirled in the pit. It dried their throats and mouths and coated their skin. Yet they seemed nonplussed as they went about their task.

They were speaking German and went about their work with great alacrity. Around them in the pit were ancient remains and artefacts reputed to be Sumerian, but some of the men knew they were much older. It was the subject of a joint German and French expedition invited to Iraq by Saddam Hussein.

However, only a few of the personnel assembled today were archeologists. Most were former Kommando Spezialkräfte, or KSK, Germany’s special operations force. The man in charge of the operation began passing out US Government Issue desert camo BDUs. The assembled “troops” began to strip and put them on. This was a page right out of SS Lt. Colonel Otto Skorzeny’s playbook.

Skorzeny is perhaps one of the most fascinating and unconquerable personages to emerge from World War II. He had a dueling scar on his left cheek which he wore proudly his entire life. His ingenuity, elusiveness and incredible luck were exceeded only by his evil. His daring and impossible raid to rescue the deposed Benito Mussolini made him a hero of the Waffen SS and a national hero in Germany, although his talent had been recognized long before that. He was hailed as “the most dangerous man in Europe.” In December 1944 during the Battle of the Bulge he dressed his operators in American uniforms, gave them vehicles painted with American insignia to travel around in, and instructed his best, often flawless, English speakers to spread chaos and disinformation among the American lines.

It created such havoc that American GI’s had to start testing every Yank they ran into for “American-ness.” Even generals were waylaid and diverted by trivia about movies, baseball and state capitols. General Omar Bradley himself was delayed by such a checkpoint.

He gave himself up after the war and was charged with various war crimes that violated the Hague Convention of 1907 for wearing enemy uniforms behind enemy lines. Incredibly, he was acquitted. The most dangerous man in Europe remained in detention, however, awaiting a denazification hearing, but escaped in 1948 with the help of three former SS officers that Skorzeny claims were aided by the Americans themselves.

Skorzeny went on to prosper in the post-war world. He became the quintessential post-war Nazi, devoted to the welfare of former SS members and spreading his skills in wreaking havoc, chaos and violence. Like every “good” Nazi, he went on to associate with wartime associates and help build the Nazi vision around the world, insidiously infecting governments and cultures everywhere they could.

This was all cleverly financed under the evil genius of Martin Bormann and Swiss Banker Francois Genoud, who, incidentally, was also the personal banker to the Bin Laden family (The Germans have a long history of weaponizing Islam). They also worked their own invention, the Bank of International Settlements, or BIS, due to its immunity from Swiss and international law. They made liberal use of BIS diplomatic pouches. DeutscheBank was another favorite institution. 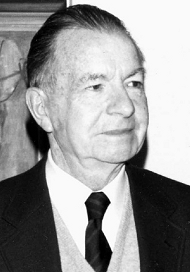 Mainstream historians mistakenly believe that Bormann was killed at the end of the war, but there are three different reports of his death in three different places, all on the same day, and no body, until skeletal remains purported to be his turned up in 1972 at a Berlin construction site. They were coated with Peruvian mud.

Another associate of Skorzeny’s was Reinhard Gehlen, a Nazi intelligence officer who ran CIA operations in Europe after that organization’s inception and went on to lead West Germany’s intelligence service, the BND.

Through the likes of Skorzeny, Gehlen, Genoud, Bormann and others, the Nazis pressed home their vision of world domination from places like San Carlos de Bariloche in Argentina, Madrid, Egypt, and quite possibly Israel. Yes, Israel, where the Mossad hired Skorzeny as a contract hitman and mole.

The history books are wrong. The Nazis were the clear winners in World War II. Germany, Italy and Japan certainly lost. The Allies also won, but only by facilitating the Nazi victory, a nightmarish twist they wouldn’t be aware of until the next century.
These epitomes of post-war Nazism, however, did not advance their vision with public demonstrations, ostentatious displays of Nazi colors and insignia, or by displaying photos of Hitler prominently in their living rooms. No. They went about it by insidiously creeping into the worlds of high finance, politics and industry, and taking over Western intelligence agencies like the CIA and the BND.

The captured nations became instruments for advancing their globalist agenda, and even employed “former” Nazi sympathizers like billionaire George Soros and the Mossack-Fonseca law firm, itself co-founded by the son of an NCO in the Waffen SS. Trusting war-weary nations were easy prey, especially amidst Cold War paranoia. Paper Clip scientists weaved their way into the American bureaucracy. Powerful, sympathetic families like the Bushes helped establish financial concerns and connections to the highest levels of government. The process was repeated in Western state after Western state; wash, rinse, repeat.

The prodigious Colonel went on to advise Egyptian president Abdul Nasser and Argentinian dictator Juan Peron, where he is rumored to have had an affair with Peron’s wife, Eva. From there he was close to San Carlos de Bariloche, the unofficial central command for post-war Nazis, and from which he could help direct much of the Cold War and social and cultural mayhem that unfolded in the following decades.

He concluded his career by setting up a mercenary organization called the Paladin Group. They trained guerrilla groups and state security services alike. It was from Paladin that the weather-beaten men in the dig pit came. Although he did not leave any spawn of his own to pollute the earth, these were Skorzeny’s spiritual children, and in many cases, the actual grandchildren of dedicated Nazis. Skorzeny was a darkly shining example of what the Nazis accomplished in the naïve, mis- and dis-informed world following World War II.

The mercenaries sprang from the pit. To the casual, or even careful observer, they appeared to be an American transport unit of some kind. Many held lightweight empty crates in pairs, others sported firearms. They were promptly formed up by their commander.

“From here on we speak only English. Any questions?”

There were none. The crates were tossed onto waiting M35s as the teams climbed on board. They shouted back and forth. Someone cursed loudly in German. A tall blonde woman in full battle fatigues appeared suddenly and shot him in the back of the head.

“What we have here is a failure to communicate,” one of the men joked to his partner, in reference to the Struther Martin line from Cool Hand Luke.

The blonde stepped up to the pair. “You can crack any jokes you want, as long as they are in English.” She turned, shouted instructions, and stormed off to harass someone else.

The men eyed each other with lecherous bemusement and nodded at what they both knew they were thinking, one man shaking his hand as if burned, the other drawing his fist rapidly to his waist. They were the honored grandsons of heroes, and they in their turn were raised to be proud and fearless in service of the 4th Reich, which would soon come to fruition.

Engines growled as the trucks rolled off in an ever increasing cloud of dust towards Baghdad. The mercs in the trucks poured over plans of what appeared to be the interior of a large building while others checked gear, restraining systems, and the crate interiors. Several of them had specially molded padding for the objects they were to hold.

Really enjoying this, and certainly Joseph P. Farrell is a great inspiration. Glad I found your work.

Thank you for reading! He's quite the writer and researcher. Thank God he's doing what he is, along with other great minds.