Back in the Colonel’s tent, he was seething. The recovery of the mysterious object had gone well. But a thorough search for the perpetrators of the theft turned up squat, as did an in-camp search for the camera and clipboard, which meant he would fail to deliver them. The Colonel didn’t like failure, and now it was his duty to report it.

Jorgensen sat with a headset on operating his radio as the Colonel stood beside him, also wearing a headset, speaking German into the mic. “The pyramidion is on its way….my congratulations to Herr Richter, his speculation was right on target….no, Sir….I’m afraid they’re missing…..probably not lost, stolen…….yes, Sir…….Jawohl…..Jawohl!”

Just then a sergeant came in. “Sir, we have some more activity at the hole. We think you should have a look.”

“Thank you, Sergeant. Have Bueller and Grossman meet me there.”

Bueller and Grossman were quickly found in the mess tent just having breakfast. The sergeant instructed them to abandon their meals and proceed immediately to the aforementioned meeting place.

They hiked over with the sergeant and arrived to a great commotion. A geologist was bent frantically sweating over a seismograph. Other men, some scientists, some technicians, tapped on dials and gauges as if they were malfunctioning. One guy was waving a Geiger counter while another had is head buried in casing and wiring. Another called off readings from a device I’m sure you’ve never heard of: a torsion field detector. This device detected changes in local space-time due to changes in the torsion fields in the ether. When these changes become detectable, something big is about to happen.

In fact these changes are occurring constantly and continually around us, but within ordinary limits we can call baseline. These ordinary states can be altered when scientists start messing around with certain kinds of geometric forms, motion, and powerful electromagnetic or electrogravitic fields. That is because certain geometric forms, especially tetrahedrons and pyramids, and electromagnetic forces, even with null vectors, can have scalar effects on the ether. The torsion field detector interprets these changes and translates them into a meaningful scalar value using Maxwell’s quaternion equations.

The Colonel stood about 6 feet from the great chasm consulting with his scientific staff when the two men reached him. Touching one man on the shoulder he guided them into position between himself and the hole. Shoulder to shoulder, they snapped to attention and he responded with the “at ease” command.

He stood proudly and confidently erect with his hands comfortably set in the small of his back. Silently he positioned himself exactly in the center in front of the pair. He cast his glare back and forth from one to the other only inches from their faces. They began to fret.

The Colonel did a quarter turn so that now he was perpendicular to the men and looked off into the distance thoughtfully.

“Gentlemen, if there’s one thing I can’t stand more than incompetence, it is betrayal.”

They looked askance at each other not knowing what the Colonel was talking about.

“What do you mean, Colonel?”

The Colonel turned to face them again and continued with stern and measured speech. “We have conducted a thorough search of this site, and of the desert surrounding it. There is no trace of the camera or the clipboard, nor of any alleged perpetrators. Not a track, not a trail, not an abandoned campsite, not a tire track, not a sign of a single human being who doesn’t belong. That leaves me with only one conclusion.”

Their eyes widened. “Wait a minute, Sir. It’s not like that.”

“No, Sir. There must be some mistake.”

“Well, then, why don’t we do this the easy way? Just tell me where the articles are so they can be retrieved and sent to their rightful owners.”

“We told you yesterday, Sir. They were stolen. We don’t know where they are. We need to look harder for the jokers who took them.”

“Of course, Sir.” They threw terrified sideways glances at each other.

The Colonel looked at his feet and sighed. “Let me make this easier then.”

Immediately he shoved Grossman into the hole. His screams were heard until they faded into oblivion. Bueller turned left and right then tried to flee, but he was stopped by a couple of MPs.

There was no response, just terror.

His mouth was open, his jaw twitched, but only a desperate silence came forth.

His eyes shifted left and right at the MPs restraining him as he struggled to free himself. The Colonel gave a dismissal flick of his hand and the MPs hurled him into the hole to follow his partner. 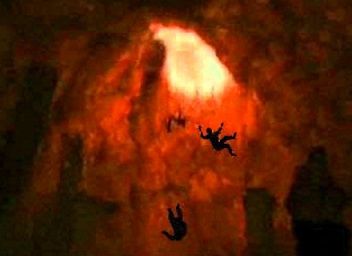 “Check their quarters. Shred every goddamned thing in there if you have to. Find that camera and clipboard!”

The MPs marched off. One slapped the other playfully on the chest with the back of his hand. “Bueller, Bueller, Bueller? Hahahaha!” He joked referring the 1986 movie Ferris Bueller’s Day Off.

“Hahahaha. Ya. You can’t make that sort of thing up!”

Just then, the world around the MPs changed. It changed for everyone on site. A slow motion, muted, dreamlike quality infused the place. A sudden flash blinded everyone present as if the hole had disgorged in one great belch all the light it ingested when the Shorleys ran their fateful experiment.

When the men came to, the hole was gone. In a gruesome act of poetic justice, it had partially claimed the colonel. Parts of him stuck up out of the earth in a Hellish arrangement that was physically impossible. A foot stuck out here, a leg there. A forearm dangled limply from its elbow. His head protruded from a boulder that had been at the periphery of the hole. It was silently screaming.