Frank and Melissa were waiting at the airport in a Land Rover 109 Series IIA with two jump seats added to the bed . They liked it because it didn’t have any electronics to tamper with, was easy to work on, and could go anywhere they needed it to on their vast property. Unfortunately, it lacked air conditioning, so they’d removed the top.

Faro and Georgeann giddily greeted them with hugs all around and tossed their bags and gear in the back. It was a long drive through the hot Nevada desert from Vegas, but the chatter never stopped. The Shorleys stood, quite literally, at the threshold of something stupendous that dominated the conversation. But there was catching up and small talk to do as well.

When they’d arrived, they unloaded the gear from the back. Frank reached over the side panel and clutched a bag in each hand, but paused to take in Prof. Faro who was standing at the rear. Faro looked puzzled. “What?”

“Aren’t you hot with that jacket on?”

At that very moment the professor had removed a handkerchief from his pocket and began to mop his brow. He stopped, looked at the hanky in his hand, looked at Frank, and then guffawed. “Oh never mind that. Let’s have lunch. I’m starving.”

The Shorleys cooked up some delicious pronghorn whose meat was flavored by the sage on which it fed. The meat was accompanied by potatoes and a special salad with fresh vegetables from the Shorleys’ greenhouse. Faro filled them in on the Baghdad Museum theft as they munched.

“So why do you think it’s significant?” asked Melissa.

“Think about it. You have a convoy of trucks roll up and clean out the museum in the midst of a battle. And then ten days later, on Hitler’s birthday,” he started chortling ironically as he finished, “the only Ju-390 in the world is flying to Argentina ‘for an air show.’ Who’s buying that?”

Some bits of flying salad punctuated his laugh. He laughed harder as Frank dodged to the right. Still heaving he put a napkin to his mouth, “Excuse me.”

“One thing’s for sure,” added Georgeann. “The Nazis loooove anniversaries.”

“Precisely!” the professor continued. “If I’m correct, and this is just high octane speculation here, Nazis dressed in American uniforms (how hard are they to get?), were looting the museum of thousands of uncatalogued artifacts that are either parts of the Giza Death Star, or tablets and seals containing information about them. They’ll be all the easier to move because nobody knows what they are. They're uncatalogued”

“Holy jumpin’ catfish!” exclaimed Frank. “So what do you think they got?”

“I have no idea. But it’ll take years, perhaps decades for them to assemble everything, so we have time to find out.”

“And,” noted Georgeann, “it was a German newspaper, Deutsche Welle, that first broke the story. On the same day. How suspicious is that?”

They finished their meal in pensive silence.

“They’re all over the range here,” explained Frank. “Beautiful animals. And free eats,” he added with a wink and a smile.

“Why don’t you guys get settled and changed before we go out?” offered Melissa. “I’ll show Georgeann to her room and Frank can help Dr. Faro.”

“Coming.” He opened the door and stood presenting himself in what appeared to be a complete authentic WWII British Desert Rats uniform. Georgeann burst into hilarious laughter. 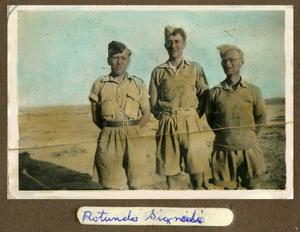 It took a few moments, but his secretary finally composed herself. Still chuckling she had to ask, “Where did you get that get up?”

“Bought it on Toppots.net! Couple of months ago.” His pride was somewhat satirical. “I’ve been waiting for just the right opportunity to wear it.”

“Well, this is it. My God. You got me.” She continued laughing.

It wasn’t unusual for the two of them to set up jokes for each other. But then, when a guy wears an A2 flight jacket and a drover hat everywhere, and he’s getting ready to explore the desert and appears wearing this outfit, one can’t be sure.

“C’mon, Georgeann. You have to get into it. I believe in going all in.”

“Oh I can see that!” It was all she could do to control herself.

He took a dramatic step forward and cocked his head boyishly, “They’ve even got an old Land Rover to drive around in.”

“Well, it’s too bad it doesn’t have a machine gun mounted in back or you guys could play Rat Patrol all day.”

Faro threw back his head slapped his knee in glee. “Hahahaha! I suspect we practically will be.”

When they got downstairs, Melissa reacted just like Georegann had. Melissa put her arm around him affectionately and said, “Glad to see you haven’t changed over the years, Doc.”

Outside, Frank was throwing the last of the gear into the Rover. He heard the crunching gravel from their approaching footsteps and looked up. He motioned the trio to get in, then hopped in the driver’s seat next to the professor. He turned to the doc, looked up and down, then remarked, “Huh. No jacket?”

Frank turned the key and off they drove.

Thanks! Glad you're enjoying them.