It was a nice room but not too fancy. The walls were covered with various nicely matted and framed photos with military or aerospace themes. It had a long pressed wood conference table with a cherry veneer and black leather chairs that matched. An overhead projector hung over the table at one end and a screen covered the far wall. Neither was in use.

The men were gathered at one end of the table.

“We detected the anomaly here,” one of the pocket protectors whose name tag said “Smith” said pointing at a satellite map of Nevada.

“So what kind of anomaly was it?”

“Space-time warp of an unknown cause. It almost sucked in one of our experimental craft that happened to be passing by at the time, General Smith."

The conversation continued, alternating between the men according to their interests and specialties. Most of the explaining came from the civilian scientists who monitor these things from their underground laboratory and fly in and out of Area 51 on Janet Airlines. Most live in and around Las Vegas, and their wives hate them because they never talk about their work.

“I suppose if you were supposed to know that, Smith, you would.”

“We’re still getting readings. We’ve sent probes out over the last three days and don’t see much of a change. One of our satellites took this picture.”

He slid a color photo across the table so everyone could see it.

“What the hell is that black spot in the photo?”

“It is. A really frikkin’ deep hole.”

“I thought only we could do stuff like this. Who or what made that hole, Mr. Smith?”

“Beats me. There are rumors of some couple who bought land up there a few years ago so they could do their own science experiments. Inventors. Entrepreneurs. You know.”

“Could they have done that?”

One of the men in short sleeves blew air threw puffed cheeks and stroked his head. “Ppffffhhhoooo. Not unless they can build the stuff we got here.”

“Let’s say they did do it. Why’d they want a…’bottomless’ hole? Smith, what about you?” As it turns out, everyone was named “Smith” for security purposes. 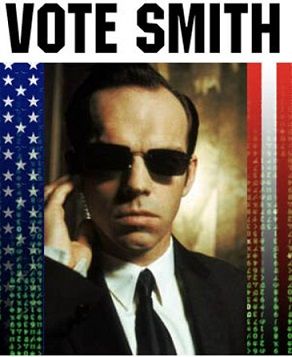 “Sure would be useful for ‘waste disposal’,” joked Smith. "A lot of, uh, Eye-talians, in Vegas."

Smith shrugged his shoulders. “Could it be an accident?”

“An accident??” asked one of the Gen. Smiths incredulously.

“Well bottomless holes just don’t open up on their own accord.” Then he continued to ensure he was technically correct, “Typically.”

Smith was making thoughtful motions with his coffee cup. “Were they testing something? And it went awry?”

“Well, that would fit Smith’s data.”

Finally, General Smith addressed them, “OK, OK, OK. Just find out who it is and take care of it. General Smith, We can’t just have anybody in control of that space, but people with that kind of money and brains can’t just disappear, so handle it accordingly. And we may need them later if they’re as smart as they seem. Just get a hold of that hole! So to speak!”

“What are you going to do, General Smith?”

“I’m going back to Washington, where nobody calls me ‘Smith!’”