Slowly the deep steady undulating din of six giant propeller engines grew louder and louder over Buenos Aires. People came out of their homes and places of business with binoculars to see the giant plane pass overhead. It roared low over the suburbs so spectators could have a good close look, then landed at Morón Airport just outside the city.

It immediately taxied into a purpose-built hangar where it was where it was parked next to its twin, flown to Argentina in May of 1945 by Hans Kammler after making a deal with the Allies. Also in the hangar were another convoy of trucks and serious looking men in expensive but “ruggedly” fashioned clothes who tried to be inconspicuous. They were approached by Müller and Edda who were the first two off the plane. All the discussion was in German.

“How did you make the flight with all that cargo? The plane was never tested with so much weight.”

“In fact the cargo is practically weightless,” explained Edda.

“The only objects with weight were the cylinder seals and tablets. Everything else weighs nothing for some reason.”

The mysterious men nodded in approval. “You have done well, and will be rewarded when we get to Bariloche.”

“It was honor enough to be a part of it,” stated Müller.

“Still, good work, when it is so difficult, should not go unrecognized.”

Another gray-haired man stepped forward. “But you and your team must be exhausted. We have made accommodations for you here in Buenos Aires tonight. You will follow us to Bariloche in the morning. Mr. Silva will see to your needs.” He gestured to a waiting bus.

A broad-shouldered, bow-legged man sporting a sand-colored tropical Luftwaffe flight jacket tipped his Greek fisherman’s cap and smiled wryly. He stood sideways, puffed out his chest, and extending his arm, presented his bus.

“Thank you so much.”

The bus proceeded to the city. Mr. Silva’s first destination was the Alvear Palace Hotel in the La Recoleta.

The airbrakes hissed and Mr. Silva got up from the driver’s seat. He reached up to the overhead rack and produced a pair of his and her tan leather satchels and a suit bag. He then approached Müller and Edda who occupied the first pair of seats. He was both cheerful and formal in a dark sort of way.

“Excuse me, my friends. This your stop. Herr Bormann has sent these for your convenience. Evening wear for tonight,” he said raising the suit bag. “Travel wear for tomorrow and daily essentials,” raising the satchels. “You’ll be in the presidential suite. I shall pick you up at nine tomorrow morning for the trip to Bariloche.”

“The pleasure is mine.” He grinned broadly.

As soon as Müller and Edda had debarked, he addressed the remainder of the team on the bus. “We have special plans for the rest of you. Argentinian barbecue on the Pampas! I’m sure you will find it irresistible.”

The men cheered with approval.

The bus choked and roared to life. Mr. Silva wound his way through the city and began the southbound journey. As they entered the marshy Pampas south of the city, Silva turned off onto a dirt road that led to a large campsite with cabins and lean tos. Some gauchos were working a massive barbecue. A large pile of carelessly stacked wood lay next to it. Two other gauchos cheerfully strummed guitars. 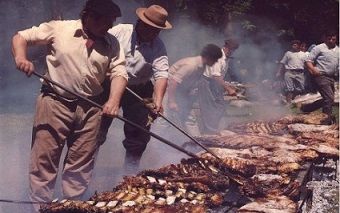 “Excuse me, gentlemen. I have to check on our arrangements.”

Silva reached for the lever and swung the door open. He walked over to the gauchos who shook his hand familiarly. Silva bent over close to the grill lid and inhaled the intoxicating aroma of barbecued steak. He pierced one with a long-handled fork and lifted it to inspect it. A small group of slim, scantily clad model type girls exited one of the cabins and strolled toward the gauchos and their grill.

The entire interior of the bus was consumed in flames and men screamed. Then a loud explosion lifted the bus about a foot into the air. A rattle like buck shot on a steel roof accompanied the explosion. The bus came to rest again almost exactly where it had stopped, its roof pimpled by shrapnel. The gauchos doused the cook fire, got into cars along with the girls and Mr. Silva and drove off. Mr. Silva, in the passenger seat of one of the cars still had his steak on the fork and held his hand under it catch the dripping fat. He took a healthy bite and remarked with his mouth full, “Mmmm. I love a good barbecue,” and bit it again.