Suddenly the chop of helicopters was heard. The groups, scattered around working at the Barstows, looked to the sky and noticed this was not normal. This was the unexpected visit. Only this time it wasn’t unexpected. Melissa sprinted to the control room and sounded a loud siren she’d set up for just such an emergency. Daryl and his men moved in rapid order to their defensive positions and the Mafiosi took up theirs. Daryl and Greave's prediction on the assault point were perfect as the Nazi operatives fast roped into a flat just over a hill away from the buildings.

They came charging over the ridge and assaulted the mockups where Daryl’s team was ensconced. Brisk fire went back and forth as 30-odd Paladins advanced. They closed on the position and sprayed so much lead Daryl’s men couldn’t come up to return fire. As the heat intensified and shards of concrete, wood, and stone showered Daryl’s men hunched behind cover, the six Italian gentlemen from Las Vegas swept around the "pyramid" and flanked the Paladins with such an enfilading hail of bullets it was they who had to now retreat. The three at the far left of the line bit dust as the lead found its mark. Daryl’s men sprang over their barrier and returned what they’d just received—with interest. Paladins dropped like hot dogs in the desert. They withdrew to the ridge and continued to fire from atop. Shit. They had grenades. Daryl’s team dove for cover while the Mafia crew disappeared around the end of a knoll.

“Where the hell are Frank and Faro?” Daryl screamed into his radio to Greaves.

Meanwhile in the control room workshop Frank was screaming at the girls, “C’mon! C’mon! Get that thing bolted! It’s hotter than summertime in Hell out there!”

“We’re trying! The mounting from the conjugator pushed these slots out of place!”

“C’mon! Yer Rez girls! You can fix anything!”

Frank didn’t dare open the door and draw fire into the garage interior, though an occasional ping of a stray bullet could be heard on the steel door. The girls focused intently, as if their very attention was a well-focused laser beam. Coolly, calmly, as if reading comfortably in the garden on a fine Spring day, amidst the racket of gunfire, they jiggled and pushed and squeezed until the .50 caliber was in place on its mount and securely fastened.

They dashed to the table and grabbed a couple of AR-15s. Faro jumped in back of the Rover and Frank cranked the ignition.

The girls swung the door open just as Frank gunned the engine and raced through. Carrie and Mary laid down covering fire for the Rover to advance. The Rover bounced as it sped over the rocky landscape. Faro gripped the weapon and spread his legs to steady himself. Melissa meanwhile had picked up another device in the control room, said to herself, “I was prepared for that,” and pushed a button.

BOOM! A loud explosion on the ridge near the Paladins drove shrapnel and sand into their position.

Daryl and his team were now advancing on the ridge under hot fire, dodging from structure to structure. Melissa came into the doorway of the control center to get a better look at how her charges were working, gauged the position and pressed another button. BLAM! Two Paladins flew in opposite directions.

The Captain of the mercenaries directed a squad to take the control room and neutralize Melissa and any remaining charges. Four men got up guns blazing and, in crouched runs, charged the control room. Carrie and Mary spotted them from the garage door and charged the men without regard for life or limb, shrieking wild and terrible things that only they and the wondrous spirits of war understood.

Melissa handed the box to Georgeanne as she swung her weapon into place on its sling and shouted, “Push the buttons!”

“Oh dear!” Georgeanne closed her eyes and grimaced. One by one her fingers found the buttons. Explosions rocked and shattered the ridge above the mercenaries. Daryl’s teams exploited the chaos to take the position. With mighty war whoops that rent the mighty and impenetrable veil that guards the Other World, they rushed up the ridge emptying their magazines with righteous fury. And some of those there that day said they witnessed with newly opened eyes, Geronimo and Cochise burst through that fractured veil with a supernal band of warriors and fall upon the Palladins. At that moment, our Italian friends from Las Vegas emerged from around the knoll and again rained enfilading fire on the Paladins.

Now it was a race. The Paladins had lost the element of surprise and were beaten. They conducted an orderly retreat toward the choppers protected by a competent and professional rear guard action. The mafia crew kept on their flank to harass them. Healthy men jogged along helping the wouded ahead of the skirmishers, and towards the choppers where pilots awaited with rotors turning for a speedy exfiltration.

But Frank and Faro blazed in from their right at the head of a cloud of dust. Faro gritted his teeth, braced his feet against the walls of the truck bed, lowered the muzzle, and squeezed the trigger. Back in the control room, Georgeanne gnawed her nails as she beheld her employer in both amazement and fear.

A fiery stream of armor piercing projectiles found their marks. The choppers were sitting ducks. First one, and then another burst into flames where they sat. The Rover continued to close, audibly spraying gravel behind it, seeking point blank range to torch the other two whirlybirds which were somewhat occulted by smoke and flame and wreckage. The good doctor managed to deliver a healthy dose of lead, but return fire caused frank to duck and veer as he dodged the fire. It threw Faro’s aim off. 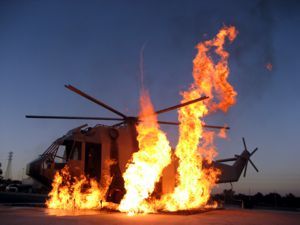 The remnant of the Paladins boarded their choppers and took off over a nearby ridge that shielded them from further ground fire. It was all over in 10 minutes. Indians 3, Brewers nothing.

What a fight! I enjoyed it. Thanks.