Bormann and Kammler sighed heavily. They were gathered with Müller, Edda, and a man named Dornberger to discuss developments.

“Well, it isn’t essential to our operations in Egypt. Nevertheless, they must all still be punished eventually.”

“We must also find a way out of this arrangement with Faro. He’s clearly assisting these troublemakers somehow.”

“Müller, you have done well in the Middle East. The breadth of your success there cannot be overestimated. However, Faro and his associates must be stopped. It’s likely the Dulce Base was not their only target.”

“What about his dead man’s trigger?”

“We’ll have to hold off killing him for now, but no more secret hand signs. Why don’t you send a courier to inform him?”

“Send word to the University. I’ll have it typed up this afternoon. In the meantime, start investigating the dead man’s trigger. Let’s see if we can find out what he has and who he’s sent it to.”

“It could just be automatic. If he doesn’t log in on schedule to this or that website or computer, it’s automatically distributed.”

“Already on the right track, eh, Dornberger? That’s exactly what we need you to find out.”

That afternoon, a letter was dispatched by courier on a flight to Brookings. Well, actually I lied. There are no flights from Argentina to Brookings. You have to fly to Chicago, then Rapid City, then finally, Brookings. But you get the point. Not much to the Brookings Airport

The courier made his way across campus to the Physics Department, where Faro kept his office. It was locked and empty. The courier asked around in the other offices, but most profs hadn’t returned from the Christmas break yet, and only a few winter term students were around along with a skeleton crew of secretaries and maintenance crew.

“Ooohh, there’s no telling where he is. He takes off to the most unusual places during these breaks. He may be in the middle of the Amazon or ensconsed in some obscure private library in Europe, or anything.”

“I see. Well, you see, I have this important delivery for him. You wouldn’t know how I could get it to him, would you?”

“Like I said, nobody knows what that man is up to. Even his secretary doesn’t know until he drags her off with him.”

“Maybe if I spoke with an administrator or dean….”

“They won’t be around till February. All those privileged higher ups, you know, they just stretch their vacations like rubber bands. Think they’re better than the rest of us. They wouldn’t know where he is either. He never tells anyone. Brings so much money into this University, no one seems to care as long as the work gets done. Such a nice, down to earth man though. Never goes to his head. Just a little quirky in his ways. Always thoughtful and generous though.”

“I see. Yes, that sounds like him,” chuckled the courier. “Still, if you can think of anything.”

“Of course. As you can see, it’s sealed in wax. Eyes only,” warned the courier somewhat jokingly while wagging a finger. “Be sure to sign and print your name here.” 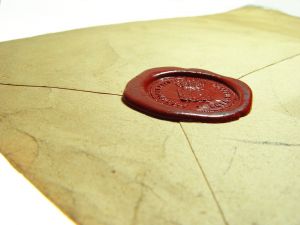 “Oh my! That man lives the most interesting life! Wax seals, even.”

“Well, thank you for taking the trouble to find me. I’ll make sure he gets it.”

The secretary made her way over to Faro’s office and slipped the envelope into a locked wooden box hanging outside his office door with the rest of his mail. And there it stayed.

It is interesting to see what is in the envelope.

Ya might have to wait fo rthe next book for that ;-)