On a practical level this means reading the concentric rings in nature. Birdsong and animal behavior tells you everything that’s going on around you. If the birds behave one way, then everything’s normal or peaceful in the forest. If they behave another way, you know a predator has appeared. You can even tell exactly what kind of predator is near by the bird behavior—absolute silence means one thing, flight to the treetops means another, loud alarm calls from the same spot mean something else again, and birds flying up into the trees every which way like popcorn is yet another signal, and a “bird plow” is a sign that noisy, obtrusive humans are about 2 minutes away. This is also true for the behavior of mice, or the behavior of deer, and so on.

These responses are most intense at the locus of disturbance and spread out through the wilderness like concentric rings on a pond, gradually dissipating in intensity. The Apache tracker, or those taught in the same methods, learns to read these rings like a newswire that is constantly and continuously updating all the wild inhabitants of a place. Or a human who is aware.

This is why 5000 troops of the US Army could never catch Geronimo. 5000 men on foot and horseback with wagons and artillery throw some gargantuan concentric rings. It was easy for Geronimo and his 27 warriors to keep three days ahead because they always knew where the army was, even three days away. The best Apache scouts who had turned against their people and worked for the army couldn’t even track Geronimo and his 27 men. That is because they were not true scouts in the Apache sense, or they wouldn’t have been working for the army to begin with. Geronimo (far right) with a few of his warriors

Besides, the master tracker is also skillful at counter tracking. He can make it look like he’s going one way when he’s really going another. He can lay false tracks that lead his pursuers into traps. He can appear to be in one place when he is really in another. He can even leave no tracks at all.

This level of skill is reserved for the true Scouts, a secret society of highly trained individuals whose own spouses don’t even know they are members. Even the chief and elders of the tribe don’t know who the Scouts are. They move in the shadows between darkness and light. They travel in the places people never look, the “dead space.” They devise new ways of walking and running to conceal their tracks and hide their intentions. They are masters of camouflage and invisibility. Thus, instead of confronting their enemies directly, they defeat them instead through psychological warfare, which usually means confounding them so badly it scares the bejeezus out of them such that they turn on each other.

A certain pair of coyotes were well-known to the soldiers at the hole. Familiar members of the local fauna, they emerged daily from their den to forage, hunt and rest among the sage. But they were not coyotes. They were men. 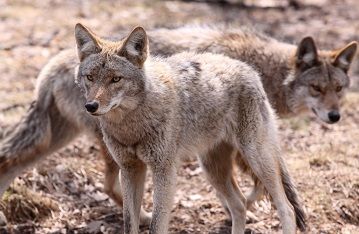