I was banned from Infowars. I wrote my August 2013 Vietnam Article. I attended church where pastor talked about 2 imaginary guys, Jack & Jill, I mean Jill and Jeb Bush. One believed in like predestination and the other believed in freewill. He talked about the pros and cons of both views. But I believe in both because either God knows what our freewill choices will be, outside of time, or he can predict things and mold his predestination around our freewill.

- 08:53 AM - Making Movies - Awesome. I used to edit the video using three VCRs. Press play on the video from one VCR, then press play for the audio from another video from a second VCR. And then press record on the third VCR. Nobody told me how to do that. I just came up with that idea and started doing it when I was about fifteen.

- 08:55 AM - Perception Deception - Griff wrote that, and I quote: "I checked out @JoeyArnoldVN’s steem it and it’s all plagiarized stuff from here with his spin on it. And he’s getting paid for it. That’s a problem." In other words, he may not even know what a quotation mark is. Writers quote and reference things all of the time. That is what I have been doing. This has been the first thread or the first time that people have accused me of doing things I'm not doing. i'm not stealin, I'm quoting. But I'm being accused of what I'm not doing. People seem not to know what quotation marks are and Steem is not money. Cryptocurrencies are not even considered to be a stock or a security. I'm quoting people. I'm telling stories. I'm linking to this website. I'm telling people to get involved in activism. I'm sharing these articles on many different websites in order to red pill people. Again, I'm not stealing, I'm referencing, quoting. There are differences between the two. I've said this many times. You can clearly see this if you were actually reading what I wrote. You can clearly see the links. You can see the quotes. I mention your names, which means I'm not taking credit for the things you write. So, for example, when I quote Griff, I say his name, Griff, and then I use quotation marks, and I use links for people to go back to the context of where Griff said what he said. Then people can learn more. If you talk about how 5G is bad, then they might see that and click on it and come here to see more people talk about how 5G is bad. Maybe Trump will see it. It is all about raising awareness. That is how we get the word out. You can try to sue me if you want, or you can try to stop 5G and geoengineering and many bad things in the world and that is what I am doing. I am trying to get people involved. I am trying to raise awareness. And Facebook is making billions of dollars each year off even people who are not on Facebook. Same thing with Google. And Bitcoin is not digital cash. And time is money and money is time. People should be paid for contributing to society, at the same time, in the name of free markets, not cronyism, aka crony capitalism. We are against communism, socialism, which would endorse volunteering time. We have limited time in getting more people interested in the information war. You can try to stop me or you can try to stop the globalists. I'm trying to stop the globalists.

Show Me The Money

- 09:12 AM - Money Trees - Griff said, "If my posts are on there that you plagiarized I expect some back pay with interest. $200.00 a month per post." But, like I said, Steem is not digital fiat. Even if it was, my articles don't even make a lot of Steem. Most of my posts get zero Steem. So, if I were to hypothetically give him money that I don't get in the first place. Like I said, I am raising awareness. I am quoting people. But they seem to be lying about these things. Griff may be uninformed on how it works. I have written over 50,000 posts/comments on Steemit since joining in June of 2017. I have been writing a lot of articles on my life. Right now, I'm working on my August 2013 article that goes over my life at that time in Vietnam. A lot of people still don't get how cryptocurrencies work and a lot of people are lying about how it works. There are reasons why Rothschild, Soros, the Federal Reserve, the globalists, the world banks, and others, are so against cryptocurrencies, as it seeks to compete against their fiat, their digital fiat, their centralization. 09:40 AM: Bitcoin Lie - Leviticus wrote: "Cryptocurrency was released into the wild by Rothschild interests. They wanted to see if it could be hacked or exploited and it has been. The next step to crypto is chipping it and injecting it into humans. Nobody seems to give a shit about your disinformation @JoeyArnoldVN. It would seem you have reached the end of your welcome on INFOCOMMS. Everyone is tired of you ripping up threads and obsessing over our posts. YOU WERE WARNED!!!" 09:42 AM: Griff continued: "Ok good bye Joey. Don’t care if you made a pile of money or a penny. You didn’t tell us or ask if was ok. God only knows what else you’ve done. By the way, we have discussions on this platform to come to solutions and debate ideas, not copy and paste for money. Get a job." I'm not sure why Griff is saying this. I can't tell if he is lying or if he clearly screwed up in the head. It is sad. Because I'm getting people to talk about things. I quote people and I add feedback. I reply to those quotes.

- 01:06 PM - Personifying Information Wars - I've been doing whatever that I may or may not be doing and/or not doing, allegedly, or actually, absolutely to an extent, perhaps, in a few different ways, to different degrees, for many years, since at least 2010. Some people might be trying to say that this is new, that I have never done this before like 2018, that I didn't do any of it until I joined this forum, and these people might be saying that I only reference this forum on Steemit and that I don't include commentary, reference, quotation, feedback, debate, points, links to the context, many different things which I do include, which I do have, that I don't write about my life in Vietnam, that I don't write about many different things, that cryptocurrency is fiat, which it is not, that Google, Facebook, and others are not already doing what I might be accused of doing. Did Alex Jones ask Joe Rogan for permission before talking about how Twitter Jack Dorsey gave Joe millions of dollars? I believe in raising awareness to bigger issues. So, I use these forums in order to humanize and personify the info war in order to help more people relate to what is happening which goes way beyond individuals and yet it began, I mean, begins, at the same time on an individual level.

- 02:45 PM - Window Into the War - It is a long story. Some people might be saying that I'm stealing. But I'm actually quoting, linking, commenting, red pilling, raising awareness, include context via links, quoting the people, not taking credit via quoting the people, trying to get more people to do offline activism, trying to humanize, personify, the information war which includes trying to get Trump to see the problems with 5G, geoengineering, CPS, etc. People can Write Trump and tell Trump what Trump needs to do and talk about more and more. We are living in information wars and some people might be trying to sue me, attack me, take me down, as opposed to our continual fight against tyranny, globally. This article post here serves as a rough draft to many different issues and things that have been happening. I shared this article on many different websites all over the Internet on Sunday. Griff started sharing some of my videos on the INFOCOMMS and suggested that they write articles about me to give me a taste of my own medicine. In other words, Griff might be ignoring why I've been writing about all of these things. He might not even get what I'm trying to do. Just ate some toast and some potatoes. I'm watching Jack Black who might be a Satanist. Was watching Pew Die Pie who talked about people are monetizing videos on YouTube which may be for pedophiles. So, what can we do? I burnt some of my toast. I wasn't to play basketball. I'm pretty tired and busy. I was shoveling snow for my snow hill.

- 06:42 PM - My August 2013 Article - I visited Cambodia for the first time ever. I began teaching English at the Leaf Pagoda (CHUA LA). I moved in with Vietnamese Rick in District 12 of Saigon, Vietnam, in August, 2013. I was watching Dexter.

- 07:00 PM - Doctor Oatmeal Aint No Doctor - Griff: "Before I felt bad. Still kinda do. But here’s the thing. He’s a shit bag. He claims all these things, he’s fighting globalism, he’s fighting Rothschild, he’s fighting Soros. He’s not fighting shit. If it’s anything he’s just here to be a monetary vampire. He’s just here for money. I took a different shift to literally fight those ass clowns. If him being a doctor, a historian, a Vietnamese English teacher, a journalist, literally the Jack of all trades makes him creditable then polish my balls and call me Chris Farley. I feel bad for his condition but not bad for him taking advantage of us. He can quote me on that but he won’t because he’s nothing more than a shit bag." Alibaba: "Keep U.S. posted I always worry about crap like this !! and what we need to do incase our information has been compromised in a negative light for the left to attack U.S. on … NOT COOL !!!" R Total 369: "Dude has been a shitbag since day one. Derailing every thread just to post it elsewhere for profit. I think he is the reason a lot of people left this forum." I eventually found out that Infowars Banned Me. I watched The Walking Dead 911 around 1 AM Monday. 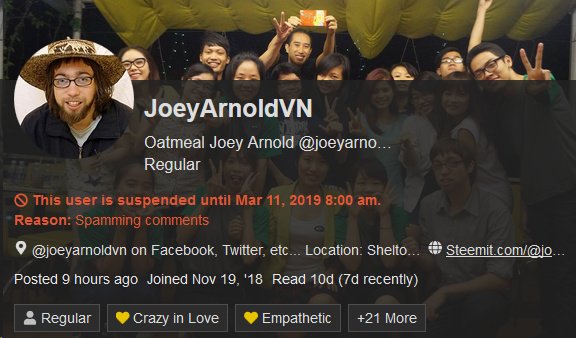