Sharon Clayton and Matt Kurtz told me about The Walking Dead in like 2010 and/or 2011. So, I binge-watched the first season all in like a day and then had to wait for the fall of 2011 for the second season to premiere. Love 2012 Question Debate | Katy Perry - Part Of Me | So, I've been watching each episode of The Walking Dead each week ever since 2011, generally speaking. So, that is the one thing that stayed consistent in my life during the 2010's, that is this past decade, these past ten years, for the most part. I was also watching Star Wars: The Clone Wars. On the 2nd, I created Ignition Impression. Started the love debate question thread on Love Shack on Thursday, the 29th of March of 2012. Love should be focused from a foundation of belief over the winds of emotions. Stand strong on priorities each day. Pick your battles wisely. You don't have time to do everything. Be patient and wait for the right moment. Go with your guts. How People See You

Step Out of the Darkness

2012-03-12 - Monday - 11:03 PM | Lock Her Up. Why? Because as a CFR Ambassador, she was telling people to go after Joseph Kony and was calling for more U.N. intervention in Uganda. By the way, the U.N. is also trying to take over the United States and the world.

2012-03-16 - Friday - Government are funding, training and protecting terrorist groups worldwide. In this blockbuster which has gained worldwide prestige. You will learn the origins and the true story behind 9/11. | On the Friday, March 16 edition of the Alex Jones Show, Alex talks with Sanyu, the Ugandan woman behind the "Kony 2012 Video is Misleading" video on YouTube that has gone viral with over 2 million views since March 7. Alex also talks with Infowars.com editor and journalist Patrick Henningsen in-studio. Alex covers the latest news, including more bad news about the economy with gasoline prices leading the charge as the cost of living and inflation move upward despite rosy predictions of recovery by the government. Alex also takes your calls. | Emmerdale | Freedom4Fresno

Beside The Dying Fire

2012-03-26 - Monday - MADE FROM GENETICALLY MODIFIED BACTERIA WASTE, ASPARTAME RISKS PUBLIC HEALTH | EVERYTHING IS SPYING ON YOU

In terms of music and the focal point of many of his speeches at SXSW, Billy mentions how corporate interests have fundamentally changed how music is created and how people respond to it. To him, the mass commercialization of music had led to a situation where people cannot emotionally connect to it anymore. Music does not seem to have the same level of cultural impact when it is inauthentic in nature. He asserts that he is a part of a movement where artistic expression and integrity is at the core of the music.

Billy also comments on how corporate driven interests have negatively affected society as a whole. He sees the pervasiveness of corporate values as a primary agent in the dilapidation of communal-oriented structures. At the same time, technological advancements have encouraged individualistic lifestyles and further isolation. As a performer, he has noticed drastic changes in the audience over the years. He feels that people are no longer hungry for new knowledge and are definitely not interested in hearing alternative views. To him, the role of the entertainer as an agent of social change has been purposely diminished. Both Billy and Alex think that it is important for the younger generation to direct energy towards innovation, helping others, and preserving freedoms and liberties. Billy also pushes people to question the media's one-dimensional dialogues and any issue that has strong corporate backing. 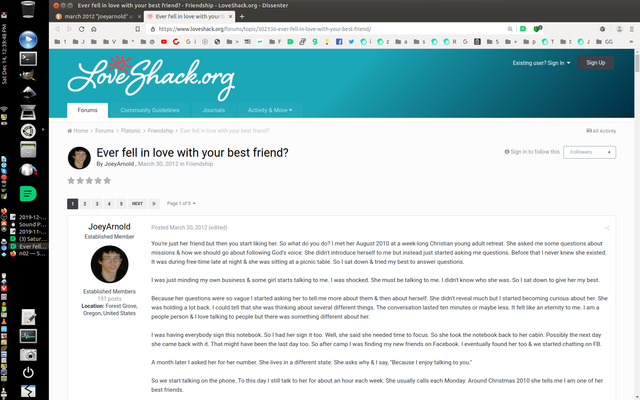 Moving On If Not Aligned Submit
$0.03
5 votes
3
Authors get paid when people like you upvote their post.If you enjoyed what you read here, create your account today and start earning FREE STEEM!
Sort Order:
[-]
joeyarnoldvn (58)  ·  28 days ago (edited)

We are born sinners, not perfect, lacking Christ whom is the only One who can save, redeem, transform, & change us lawfully, internally, practically, & eternally.

Sin is Not Always Bad

Sin means we're not perfect & that we got to have some Christ in our lives or we'll spoil it. Spoiler alert. Sin is not always bad & sin can sometimes be good but sin is never what's best for our lives.

My TV in Forest Grove