svashta (60)in #writing • 3 years ago (edited)
The writing prompt was:
"Warm"
Provided by @snook
@snook also provided a picture that inspired the idea and which I then used in the story. “2 miles North to Bellenau, ... 5 miles Northwest to Myrefall, ...” A drop of sweat dropped from the tip of my nose and onto the old, rugged map. “Wimborne… hmmm…” I kept moving my fingers around trying to measure distances as accurately as possible. “So if I understand this right, it should be about 700 feet East.”

I folded the map, tucked it into my backpack and reached for my water bottle. The sun was piercing through the treetops so I had to close my eyes to take a sip. To say it was hot was an understatement. The warmth was radiating even from the ground and the thick tropical bushes made sure no gust of wind ever made its way into the jungle.

I wiped the sweat off my face with my shirt, lifted my backpack and set off East.

The jungle was rough. Everything you came across wanted to kill you. From Spiders, snakes and monkeys to plants with razor sharp leaves or toxic fruit to thousands of insects and potential parasites, … Everything. You couldn’t even drink the water you found unless you boiled it. Over a fire. When it was already hot enough to cook an egg on your own forehead to begin with.

But nobody said it was an easy task to retrieve the ancient treasure, worth more than all the gold of the world combined. The legend spoke of an artifact so powerful it allowed you to shape shift into any creature of your choosing. Of any size of your choosing. It was the only such artifact still on Earth, for it was mistakenly left behind by one of the Titans before they had transcended into the heavens.

After about 300 feet I had to stop again. The heat was too much to handle and my shoulder hurt from all the slicing I did with my machete. Exhausted from the 50 mile journey, I leaned onto the nearest tree to catch my breath.

My mind wandered to the artifact and I couldn’t decide what animal to turn in first. An ant huge enough to be seen from space, a giant leopard or a tiny elephant. Or maybe a humongous spider with teeth as big as skyscrapers. They were all good choices. Picturing myself in the body of an animal put a smile on my face.

I must’ve zoned out for at least 10 minutes before the shouting of the monkeys in the distance brought me back to reality and my smirk quickly faded.

I clenched my teeth, swallowed, and then proceeded to chop my way through the jungle again.

The air around me was becoming colder and colder with each step and I knew I was close. The brushes became scarcer and scarcer and after roughly 200 feet from my last stop I was practically running through the jungle and toward my grand prize with an ear-to-ear smile.

Right in front of me I saw a thick layer of brushes among the otherwise completely diluted jungle. It was just as the legend foretold.

”Amidst nothing lies everything”

I rushed to the green mass of plants and chopped my way to its center.

Much to my surprise, there was no artifact. Not even a chest full of gold.

You wouldn’t believe me what awaited me on the other side of the leafy greens, so I took a picture of it. Have a look yourself. 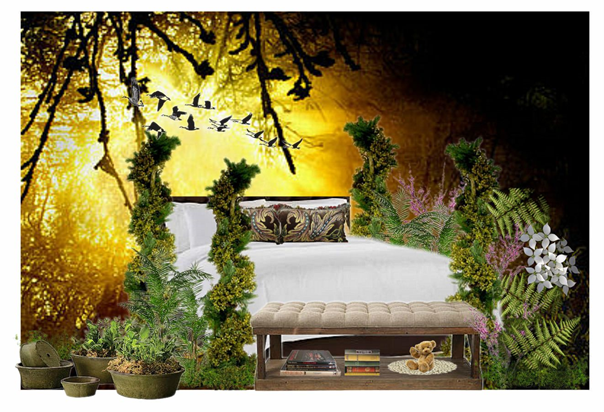 There was no mysterious artifact or anything supernatural, only a soft bed as displayed on the picture.

Apparently I was to dream myself into whatever animal I wanted.

What a sad joke.

Thank you! :D For the prompt, the kind words, and the tip! :D Youdabest ^^

This post has received a 0.9 % upvote from @boomerang thanks to: @svashta

I sorta knew u sleep with a teddy bear...

Actually with 2, because I already snuck one from the picture :3

Sweet Lobster in the deepseas! Why didn't I think of it that way sooner? It's so.. possible. and so fitting! I would've written it a tad bit differently! :O Perhaps at least add one final line implying this :o.... With your permission, may I edit? :P

Silly @ewkaw, always wants to take all the credit for everything. c.c.c.c. You know I love you still @ewkaw

You know, she told me she liked baking potatoes? I mean really, who likes that? ;p

Perfect... looks like it was always there! I don't mind baking potatoes... Eating them is better tho'... But I love any kind of potatoes, so... ;)

^.^
I agree with the eating part. I also prefer that over doing other stuff with potatoes :p Perhaps @ewkaw is onto something we have no idea about