Boomerang - A new Steemit Bid Bot for all Steemians - Whitepaper

How to bid for votes

Just send any amount of SBD to @boomerang and fill into the memo the URL of the post that should be voted by @boomerang.

In order to send the SBD, just open your wallet (https://steemit.com/@YOURACCOUNTNAME/transfers) and open the menu in the STEEM DOLLARS section. Click “Transfer”. In the dialog window fill in the following valued 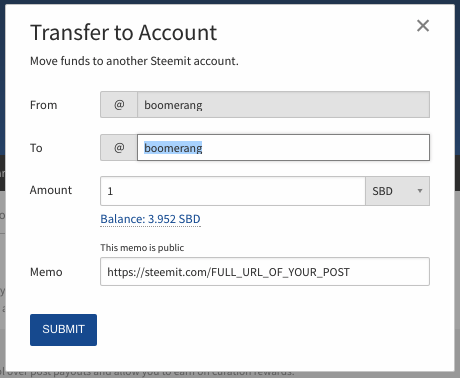 It’s recommended to check the voting power of @boomerang before submitting the bid for the vote. This can be done by checking it on https://steemnow.com/ Boomerang votes 10 times a day with an aggregated vote weight of 100 percent. The voting starts when block-number modulo 2880 == 0. The 100% vote will be splitted between all bids from the previous 2880 blocks.

@boomerang will distribute the SBD 10 times a day (directly after every voting round) to the STEEM POWER Delegators. The payout is distributed in proportion to the amount of the SP delegation.

@boomerang will distribute the curation rewards depending on the total amount of SP delegations, for details see the table.

The more STEEM POWER is delegated, the higher the share that will be distributed to the delegators. Future changes are possible.

@boomerang was initially created with 500 SP, the power downs of the first weeks will be used to release these 500 SP. After that phase, the curation reward distribution will start.

Curation rewards will be distributed depending on the amount AND the duration of the SP-Delegation. The duration is the number of voting rounds the delegated SP was available for voting.

If a user revokes his delegation and does not delegate within one week, this user will lose his loyalty bonus. If he delegates again later than one week, he will start at 0 regarding the curation reward distribution calculation.

If you want to join the @boomerang bot, just delegate any amount of STEEM POWER to @boomerang. You can do this by using the Vessel Desktop App from @jesta, or via steemconnect from @busy.

Recommended would be steemconnect, because in steemconnect one can easily increase the amount of a SP delegation, which is not possible in the current version of Vessel.

To learn more about SP delegation with steemconnect, read this excellent tutorial written by @timcliff.

If you want to revoke your SP delegation to @boomerang, just delegate 0.000000 VESTS to @boomerang. After 7 days the SP will be available in your wallet again (they are blocked for one week after revoking the delegation to avoid double voting).

Interesting project. The interesting thing is that the SP delegators get a cut of the action, unlike the PAL minnows channel where delegators don't get anything back.

Yes, that's the main idea behind @boomerang, to give the average Steemian back as much as possible without the need to run his own Dr. Otto bot.

Hello @chance777, please take in mind that this is a bid bot. One round of bids is aproximatively 2.4 hours. It is also stated in the Whitepaper, that al the bids in a round will receive the coresponding share of the vote like in the example on top where 6SBD bids are getting votes from a pool of 9USD. Also the other way around applies, if there are bids with a total of 10SBD and only a vote of 5USD is available, than you will get less. As you put in over 11SBD for a round that had 4USD payout, without taking the other bidders in account, you already have lost money. It is the same principle as it is for all the bid bots. Try to put 11SBD into lovejuice, discordia or other bid bot.
The best practice is to check the vote power as it is described in the post and than check how many transfers have been sent, than for a round, bid only for one post as it will give you a bigger payout. The more bids the less you get, fewer bids in value, you get more.
Hope that this will help to understand the bid bot in general.

i had read all next time I will do for more ☺

Hi, how do I see how many bids have already been placed and for what amount for each round?

Is it more profitable to be a delegator for @boomerang or to self-upvote?

best of luck with the project... upped, resteemed, followed & used :)

Thank you very much @spirits4you.

Thank you for your support! Much appreciated! Stay tuned for my latest posts to have the opportunity to find out interesting things that happened to me.
Once again, thank you for support

Great Idea we upvoted this 100% we love the idea of Boomerang!

This is exciting, I'll try it myself and see what could be the result...thanks @boomerang in advance.

Thank you very much @adsactly

I have a question... For Weekly Curation you multiply SP x voting rounds. How can I find out what my voting rounds multiplier is? Thank you.

Sounds interesting. I will try this out.

Thank you very much @jwolf.

Thank you @homeartpictures. Nice that you supporting the project with your delegation.

Thank you for your support! I'm glad real people actually started to notice my efforts and read my articles

Great. Delegate whenever you want, @boomerang recognises the delegation automatically.

This is running the Dr. Otto bot. I really like this type of service because the bidders determine the cost of the service and its profitability. Thank you boomerang for adding another upvote option to steemit.

Here's an useful tool for determining ROI during the current voting cycle of any Dr. Otto based upvote service:
https://rawgit.com/msg768/mysteemit/master/bidder.html

good to know, the dr otto ROI tool does work with boomerang. I've tested it.

Hi there. I created simple page where users can check sum of bids that @boomerang received so that you dont' have to manually check the wallet. You can find it at http://vetercek.com/steem/index.php. I also wrote short blog post about it at https://steemit.com/steemit/@jaka87/boomerang-bot-roi-tool. I hope users will like it and find it usefull.

We love you botty!

Hello my friend!
I love your post, hope you are happy and can succeed in this special world my friend, Give a little time to see my introduction post in steemit, I hope you can see it and can up vote / resteem my posting

Hello. I'm glad to find out that you like my post. I hope to succeed to proper develop on Steemit platform and to write better and better articles. I will sure be checking your introduction post and your blog. Thank you for your support!

Very nice bot i will try it asap.

Congratulations @boomerang! You have completed some achievement on Steemit and have been rewarded with new badge(s) :

Welcome to Steemit! I wish you a good days and inspiration to create in our community! Please follow me as i follow you :)

Hopefully a case of every little helps, cheers!

Wow the idea is awesome! Keep going my friend

Nice concept, but how do you make a profit? From what I read, you are giving everything back to the delegators.

Curation rewards will be distributed depending on the amount AND the duration of the SP-Delegation. The duration is the number of voting rounds the delegated SP was available for voting

I have delegatet some SP and after one week I delegatet more:
In 2 weeks or so I Delegate more
How counting this?
After the Delgation update the Counter of voting rounds starting again?

Another great project to help the minnows. I'll be checking you guys soon.

Hi I sent 1 sbd 2 days ago for upvote and i'm still waiting for an upvote? (https://steemit.com/steemit/@pml2020/10-steemit-commandments-by-pml-a-simple-formula-for-steemit-success)

Hello, vote has been casted:

hy, i delegated to you steem power when i recive the rewards?????

Hello @steemisthebest, you delegated 2SP, the amount of your share is at the moment under 0.001 SBD, when an amount will be build up to be sent(0.001SBD), you will get your share. Thank you for your question.

Great project, I'm curious how it will work out.

Thank you very much @adly.jailani

Best of luck @boomerang I also tried you once. Expecting more from you in future.

Followed and Voted. waiting for your response please i am also new .

Great idea. I will try it soon because I am new at steemit. Followed and hope for vote please. Thanks.

thanks for your information :)

This post has received a 22.45 % upvote from @booster thanks to: @alexvan.

@boomerang. Thank you for the offer, we must use it!

@boomerang i want to delegates my 5000 sp to your bot but can i know how much in a day ,i will get return as profit and after delegation ,shall i still get upvotes with same value?

Hi @boomerang. How old should a post be to be valid for an upvote?

Hey i send 2 sbd to boomerang he did not upvoted me please contact me as soon as possible ... i can see my name on list at last round but did not recieve my upvote please

best of luck bro. i wil do join.

Congratulations @boomerang! You have completed some achievement on Steemit and have been rewarded with new badge(s) :

Best in luck in this project. Thank you

This is outstanding I just read the details and love it!

So you earn from such bots?

hi. there is no upvote while 5 hours... https://steemit.com/cointurk/@fethiye/nv49v-cointurk-2-projesi

can you change upvote to https://steemit.com/cointurk/@fethiye/kripto-petrol-ethereum-cointurk-3-projesi

i like this a lot, and will continue to support. thank you

excellent with your ideas and cultural contributions to the steemit community

thank you so much i got o.o3% of upvote from you.thanyou so much.

There were much bigger bids than yours, that' why the vote weight was only 0.03%

Minnowbooster will get it as he is the delegator.