The writing prompt for the following story was:

"Soulmates have been confirmed to be real, the only problem is yours is a complete asshole."
Provided by: A reddit user Arthurni 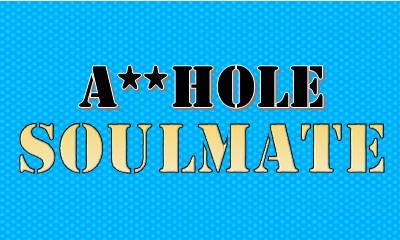 The day I hit 18, like everybody else, I was required to visit my doctor first thing in the morning. Using a foam tipped plastic stick she did a few circles around my inner cheek to collect my DNA and sent it to the Capital for analysis. There, the DNA was studied in detail and the obtained data entered into a super computer. I was told I could expect results in no more than a fortnight via snail mail.

The tale of each person having a specific soulmate is as old as time itself, but 23 years ago scientists made a huge breakthrough studying what was then believed to be noncoding DNA. While that specific segment wasn't responsible for your height, your hair or eye colour, or any of your physical properties, it wasn't of no use. Only two people on the planet shared the same pattern and after further studies, it has been proven that the people with a matching pair were meant to be together.

Scientists around the world were stoked. They immediately started a referendum and succeeded despite the large question of morality behind all this. Soon after it became mandatory for every person to provide a sample of their DNA when they became of full age. Each DNA sequence was then stored on the hard drive and the super computer ran the comparations. When done, it provided each and every individual with the identity of their soulmate.

Chaos ensued within months. People were massively divorcing, suicide count was through the roof and so was adultery. Yet it was all just brushed off as colateral damage. A necessary evil on the road to a better future. Load of rubbish!

I used to love listening to my grandmother's stories when she told me about the life before you were handed the name of your soulmate. She kept saying you would always, and never, know who is the right one for you. It was this uncertainty that kept relationships afloat. It was this uncertainty that motivated you to try time and time again for your partner. Because if you neglect them today, they might just not be around tomorrow. Whereas now you were forever stuck with your soulmate, no matter what.

A light blue envelope came in the mail 9 days after my birthday. My heart was racing in my chest and my hands were all sweaty as I began to open it.

I was stunned by what I had just read. The address was just two blocks away from my house. I reread the name at the top of the paper and it hit me like a tonne of bricks. I couldn't help myself but cringe.

I knew this man. He was the biggest bully back in primary school and as far as I knew never made it out of that place. I saw him sometimes at his father's old farm because we bought milk there often. He was one of those cocky country boys who thought they knew everything about everything. The definition of an asshole.

I turned the paper around as if trying to find »just kidding« written on the backside. Instead, I found the following:

Notice: Your soulmate had also been delievered this message on this blessed day.

"Is it someone you know?" Asked my mother who was spying from right around the corner.

I looked at her with tears in my eyes.

"Oh, dear lord!" She exclaimed in shock as I ran into her arms for a tight hug.

My mother pushed me away just far enough to look me directly in the eyes and told me:

"Look, I'll be honest with you. I didn't love your father at first either, but I gave it a chance and he grew on me. There's a reason we're soulmates, just as there's a reason you two are."

I twisted myself out of her grasp and ran to my room, slamming the doors shut and locking them. Knowing he received the message as well, I knew I had to act fast. There were so many thoughts racing through my head I needed to sit down for a moment. I took a couple of deep breaths to try and calm myself down.

My mother came knocking on my door asking if I'm okay and some other questions I can't recall because I chose to ignore them. But when she asked if I needed some time alone my mind became as clear as the day. I had decided then and there what I was going to do.

I had decided to run away.

While you're on your toes awaiting part two,
in the comments below leave me a clue,
an idea for a story you'd love to read,
a journey to the unknown my keyboard will lead.

"Being obsessed with online video games for years, one morning you wake up a lvl 1 mage in an MMORPG."
#fiction #art #story #teamslovenia
3 years ago in #writing by svashta (60)
$8.65
65 votes
Reply 12 This post has received a 1.40 % upvote from @booster thanks to: @svashta.