Computer Officer on the Georges Leygues

When I arrived in Brest in September 1976 to become the computer officer (officier calcul) on the Georges Leygues, the ship was still in dry dock. The Brest arsenal was still responsible for the ship and the crew would not inhabit the ship before June 1977.

My job and the job of the petty officers of my team was to follow the installation of the computer system and to check that all the prescribed tests were successful.

There were two rooms for the two computers

These two computers were connected by a high speed cable using some non standard transmission protocol.

The visualization computer was connected to seven consoles in the CIC.

I have no pictures of the computers and of the CIC, as I was not able to find anything on the Internet. 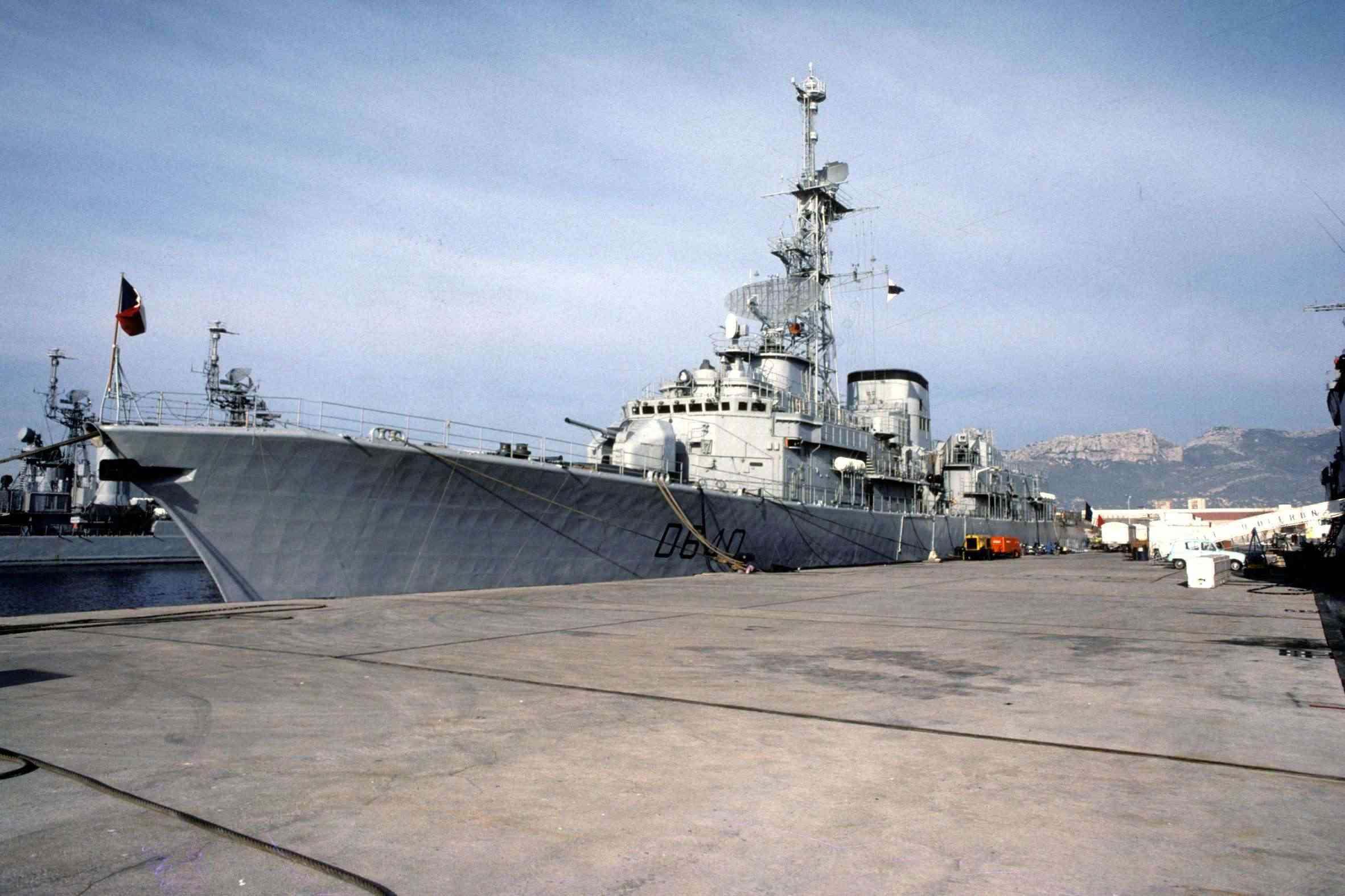 The central computer, the P2MS, a military version of the Iris 50, had a magnetic-core memory. I don't remember exactly the capacity of this central memory, but I believe it was 256 kilo Bytes. It was certainly less than one Mega Byte.

In addition, there was a magnetic disk, controlled by a small Mitra 15 computer, with a capacity of several Mega Bytes. This disk had no moving head, but one head per track; I believe there were 128 tracks, so 128 heads.

This design had two advantages:

There were not much redundancy in the whole computer system. One central computer with one fast disk, one visualization computer. If any of these was failing, the system stopped working, so all these needed to be highly reliable. The computer specialists in my team were three petty officers. Unfortunately I don't remember their names.
Before arriving in Brest in September 1976, I already knew them, as I had been instructed with them at the CPM in Paris in 1975.

They were spending most of their time in the two computer rooms, with the workers from the arsenal that were installing the computer system.

I was also visiting the main computer room several times a day. I did not really needed to do that, but computers already fascinated me and I wanted to learn as much as possible how to operate them, so that I would be able to write a computer game that would run on the consoles in the CIC.

You are a computer geek since I was on diaper (couchette).When you mention the capacity of the memory, it is a laughing matter now but then
I guess there was not much to put on the disk to need more space.
Keep on steemin'

That is an admirable reason to want to learn as much as possible about them. It was wanting to write a computer game that first made me interested in computers!

Amazing specs of those computers lol. It is really amazing how fast the technology works. I remember running to the university 3 times in 1998 to download and bring warcraft game on a bunch of floppy drives 1.4Mb each. The game itself was something like 36 megabytes :) Now one photo on my SD card takes up more space than that :)

Great writing! I started to write about my life story as well and I hope you will consider to follow me. @xqcai

I started to write about my life story as well

Indeed, the story of your life seems very interesting. I will try to read it from the beginning.

No, sorry, I will not follow you. I have decided from the start to never follow more than 50 Steemians and I am currently at 50.

There is no point to follow too many people, as you cannot really read all their posts. 50 is already a lot.

The good old days when you needed an entire room for each computer! I would probably spend most of my time in the main computer room as well. When you are at sea for that long amount time, having access to such an advanced piece of technology would be the most interesting way to spend time.

When you are at sea for that long amount time, having access to such an advanced piece of technology would be the most interesting way to spend time.

At sea, the computer is working for the ship, so there is nothing really to do in the main computer room, except to see if everything is working OK.

a very good job my friend.

that's interesting, was the computer for targeting or for navigation or what?

I think am going to join the navy

You are very senior in technology than me. Respect for you.

Great Inspiration. To have u as Mentor can NOT be measured with money. To learn from u is priceless.

nice story
nice writing.....
carry on i am appreciated by this post

Amazing post, it's interesting to know this kind of things that the people don't know

I have always said that people who are inclined to study computers are very intelligent, there is the result. A seguir...

nice to know you @vcelier .. I followed you! I'm from philippines.. I hope we can be friends in here :) You have a great job before..

long journey, of life and may be an inspiration for me, and I like your posts and thank you for sharing your story with us

That was a fascinating read, than you for sharing. The stories about you and your family's past are always a great read. Thank you for taking the time to write in English, too! :)

Outstanding story. Congratulations as a successful Computer Officer. Follow and upvoted you.

Hi vcelier,
What a good idea to include your life story on the steemit blockchain. This way, it will remain immutable and will exist as long as the steemit blockchain exists!
It is very impressive that you were working with computers long before I was even alive!
Keep on writing!
CU, Chris aka smallstepschange
P.S.: I found to your profile because you gave me an upvote on my intro post. Many thanks for this!

Did you inhabit this ship after June '77?

Sometimes people come into your life and you know right away that they were meant to be there, to serve some sort of purpose, teach you a lesson, or to help you figure out who you are or who you want to become. You never know who these people may be (possibly your roommate, neighbor, coworker, longlost friend, lover, or even a complete stranger) but when you lock eyes with them, you know at that very moment that they will affect your life in some profound way.

And sometimes things happen to you that may seem horrible, painful, and unfair at first, but in reflection you find that without overcoming those obstacles you would have never realized your potential, strength, willpower, or heart.

Everything happens for a reason. Nothing happens by chance or by means of luck. Illness, injury, love, lost moments of true greatness, and sheer stupidity all occur to test the limits of your soul. Without these small tests, whatever they may be, life would be like a smoothly paved, straight, flat road to nowhere. It would be safe and comfortable, but dull and utterly pointless.

The people you meet who affect your life, and the success and downfalls you experience help to create who you become. Even the bad experiences can be learned from. In fact, they are probably the most poignant and important ones. If someone hurts you, betrays you, or breaks your heart, forgive them, for they have helped you learn about trust and the importance of being cautious when you open your heart. If someone loves you, love them back unconditionally, not only because they love you, but because in a way, they are teaching you to love and how to open your heart and eyes to things.

Make every day count!!! Appreciate every moment and take from those moments everything that you possibly can for you may never be able to experience it again. Talk to people that you have never talked to before, and actually listen. Let yourself fall in love, break free, and set your sights high. Hold your head up because you have every right to. Tell yourself you are a great individual and believe in yourself, for if you don’t believe in yourself, it will be hard for others to believe in you. You can make of your life anything you wish. Create your own life then go out and live it with absolutely no regrets.