The Story of My Life so Far - Part 44: First year in Lorient on the Frigate Tourville in 1972-1974, when I was posted on the Frigate Tourville, Lorient was both a naval arsenal and a submarine base. 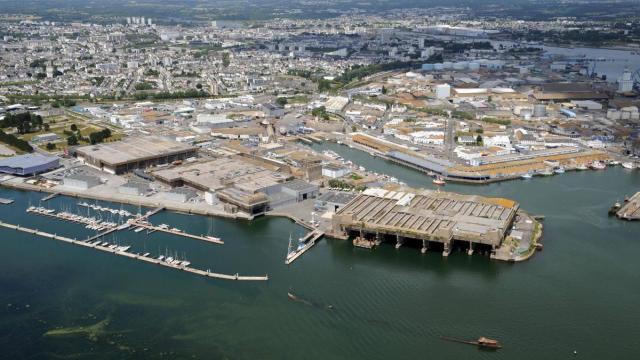 Lorient Harbor with the Keroman Submarine Base
source

These days, military ships are still built in Lorient, but since 1997 the Keroman Submarine Base is no longer in operational. The base had been built by the Germans during World War II and was so strongly built that neither the Allied nor the Germans were not able to destroy it in 1945.

In Lorient, the first year, I was renting a furnished apartment where I was living alone.

Trials at sea on the Frigate Tourville

The Frigate Tourville was the first of the F67 type. Two other F67 frigates, the Duguay-Trouin and the de Grasse, were also built in Lorient.

The Frigate Tourville was specialized in anti-submarine warfare.

She had two shaft steam turbine machinery and a double hangar for two Lynx WG13 helicopters.

Both the Tourville and the de Grasse have been decommissioned in 2011 and 2013. When the ship was considered sea worthy, we started the trials at sea.

It started with the propulsion and navigation tests. Then, the equipment and weapon tests followed.

There are some tests that are only done during the initial trials at sea, because they are expensive.

One example of such tests is long duration at "PMP" (Puissance Maximum Possible) that is using the steam engine at maximum power for at least an hour.
The speed of the Tourville, at PMP, was 32 knots (59 km/h or almost 37 mph). Going at such speed on a ship of 6,000 tons is exhilarating.

An even more fun test is emergency stop. For every French ship, the specifications are that it must go from maximum speed (at PMP) to a complete stop in less that three times its length. For the Tourville, with a length of 152 m, it meant to go from 32 knots to zero in around 450 m.
With a GPS, it is now easy to measure the distance from the point when the order for emergency stop is given to the point when the ship is effectively stopped. But there was no GPS in 1973 and no other precise system to measure position.

When we did this test, successful the first time, after the ship stopped, because it is not possible to decrease very quickly the production of steam, approximatively one ton of steam was released in the atmosphere through the safety valve on the top of the mast, with a very loud noise. That was spectacular.

Some of the weapon tests needed to be done when the ship was rolling. This was easy to do on the Tourville because it was equipped with four stabilization fins. Those could be used to create an artificial roll of up to 45 degrees.

My personal life, outside of work, was rather dull. I had no real friend in Lorient. And I was too shy to try to meet girls.

So, I decided to do something bold during my vacations in the summer of 1974: I would go to Cameroon in Africa and visit my friend Michel Djeng Bitjong, a Cameroonian Navy officer that was in my post at the École Navale.

If you have read the Summary, you should be able to guess what happened there.

I love the throwing off the buoys to determine the number of lengths that passed!

At the time, it was the most precise way to measure the total length of the emergency stop,

You met your first wife, right? :)

It is incredible to think of all the tech advancements in the last 50 years. Feels like we so undeveloped back in the 70ies. And I'm still not sure it is all good the tech brought along...

Yes, your guess is correct.

Scientific and technical progress is continuous, even if it has been accelerating in the last fifty years.
In hindsight, we sometimes wonder how we could have lived without such and such tech, but at the time we did not know that it could exist, so we did not feel "undeveloped".

Be sure that my grandchildren and your children (if you have some) will have the same feeling in thirty or forty years, when they will be surrounded by an army of robots.

Yes, agree. I'm pretty sure about that. I think the progress came too fast for humans to adapt, thus downsides. And it is accelerating even more...

1 ton of steam must be a lot of steam, I mean it's just vapor.

Yes, it is vapor initially, and a lot of it. Then it condensed rapidly into water that falls down as rain.

Nice experience. the frigate is speedy at 32 knots (37 mph).
thanks for sharing

Awesome Life History parts Thanks Alot for this

You sure have done and seen a lot of things in your life.

Congratulations @vcelier, this post is the forth most rewarded post (based on pending payouts) in the last 12 hours written by a Superhero or Legend account holder (accounts hold greater than 100 Mega Vests). The total number of posts by Superhero and Legend account holders during this period was 18 and the total pending payments to posts in these categories was $1066.72. To see the full list of highest paid posts across all accounts categories, click here.

This is such a wonderful series. I've missed the last few. Will need to go back and read them soon. :)

Thank you, I really appreciate that.

Impressive!!! Thanks for your post. Really great to see it with and through your eyes.

Daily Learn some new from your post. Love to read it.
thanks for sharing .
upvoted and following

Nice story ! Its interesting !!
Thanks for sharing here with us. I will read other parts of your story .

I am thrilled to read your post,
Hopefully you can adopt the child as soon as possible, and the child can give happiness and luck to your family,
In Indonesia it is easy to adopt a child, and I am a resident of Indonesia