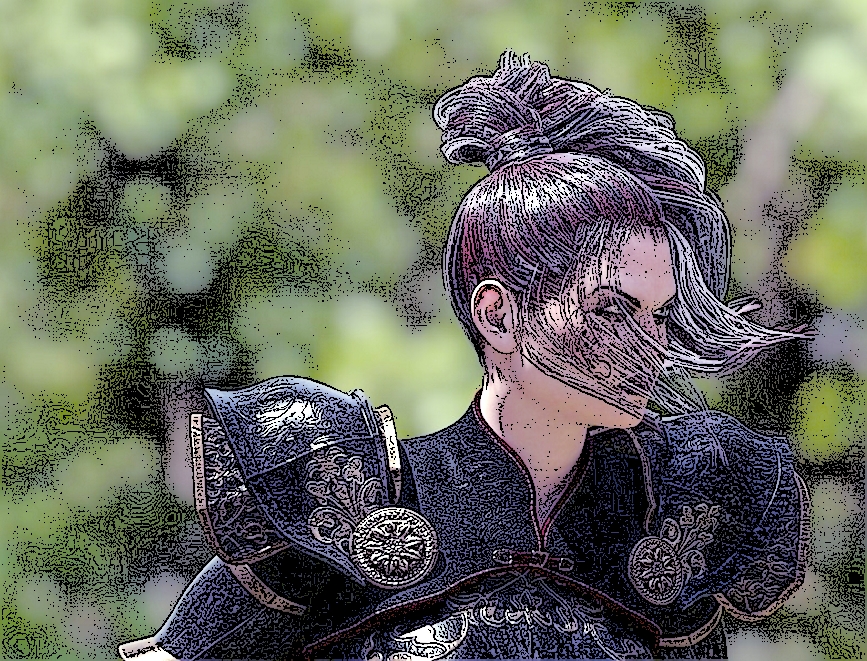 Shortly after, Wilson heard the distant door open. A figure walked quickly towards his cell. When he arrived, Wilson immediately recognized the Captain of the Gate Guard from yesterday. He stood and saluted him. The Captain saluted back. Then he unlocked the door and said, "Military are only answerable to military tribunals and the King. The Baron had no right to judge you and therefore, you are being allowed to escape. Run quickly, if the Baron's men catch you they shall kill you as an escaped convict. If you make it back to your unit, tell your commander that the Black Dragons say hello and that he definitely owes them a drink."

"Thank you, sir. I most certainly shall."

"Your friend waits outside that door," said the Captain pointing to a small door. "Make yourself scarce, for if you return, I shall be obligated to hold you for summary execution."

"May the swords and spears of the Black Dragons always be sharp and find the hearts of their enemies," said Wilson as he walked out the door into the fresh air of freedom. There stood Aella.

Wilson smiled at her. "I should have known I would find you here."

"What are you talking about?"

"Did you go and pick a fight with the Captain that you intended to lose all just to make a friend?" Aella asked.

Wilson laughed. "It's quite possible. But a man is entitled to a few secrets, isn't he?"

"Bah," Aella scowled at him. "You think like a spy not a soldier. With you, it is always been plans within plans."

"I have a plan for right now."

Just then the alarm bells began to ring.

"For once you have a sensible plan," Aella said.

And with that, they both began to run.

Arriving at the tavern, they ran straight through the main dining area to the back. Breathless, the bent over and took great gulps of air.

"I thought you were in jail," said Devon as he walked through the back door.

"And he still should be," added Aella.

Devon's face didn't show the alarm he must have felt at having a wanted criminal in his business. It was certain to go badly for him if the Duke heard about him harboring fugitives. But it was his best friend. And his best friend's friend.

"Just give us a bit of food and maybe a few coins if you can spare them," said Wilson. "We'll leave right away."

Devon quickly grabbed the requested coins and thrust them into Wilson's hand. Then he wrapped several pies into brown paper and handed them to Wilson and Aella. They quickly put them in their travel sacks.

Devon nodded. "Of course, my friend."

"And tell her that I am headed to ask the King."

Devon shook his hand. "For her sake and for mine, I hope your errand goes well. Now leave quickly, the Baron's men are sure to come here first."

As he said that, the front door burst open and several arms men ran into the room pushing tables aside and knocking over chairs.

Devon ran into the dining area. "What's all this about?" he shouted.

"That must be our clue," said Aella.

Wilson nodded and they crept out the back door and fled down the dusty alley. When they got to the end of the alley, they stopped and looked both ways.

"If we head over to the east side of town, I know where we can get a couple of fast horses. From there, I'm headed to talk with the king. You can head back and let our commander know what is going on."

Aella punched Wilson in the arm. She punched hard. "What was that for?" he asked.

Wilson smiled. "OK, all you had to do was ask."

"I don't ask, I tell. Besides, someone has to keep you safe. If I let you die, the Roc Master will never forgive me."

And with that, they ran to steal some horses.

© 2017, Stone Golem Publishing, All rights reserved--no part of this may be used without express written consent.

**All pictures used are labeled for reuse. They come from Pixabay

Great story so far, I think my favorite character right now is Aella.

Thanks @choncho. Definitely she is one of my stealth favorite characters as well. I've even thought about doing a spin off novella about her backstory.

You are welcome my friend :-)

if restem once, hahahaha

Thanks @myeasin, I will keep it up.

Thanks For Reply.I invite you to my blog as your wish img credz: pixabay.com
Nice, you got a 4.0% @minnowbooster upgoat, thanks to @bigpanda
Want a boost? Minnowbooster's got your back!

I didn't know your blog. Now I will follow you :)

This wonderful post has received a bellyrub 4.10 % upvote from @bellyrub.

This post has received a 39.98 % upvote from @boomerang thanks to: @bigpanda

This post has received a 6.31 % upvote from @buildawhale thanks to: @bigpanda. Send at least 1 SBD to @buildawhale with a post link in the memo field for a portion of the next vote.

This post has received a 8.68 % upvote from @booster thanks to: @bigpanda.

Congratulations @bigpanda, this post is the seventh most rewarded post (based on pending payouts) in the last 12 hours written by a Hero account holder (accounts that hold between 10 and 100 Mega Vests). The total number of posts by Hero account holders during this period was 234 and the total pending payments to posts in this category was $2969.66. To see the full list of highest paid posts across all accounts categories, click here.