SteemMag – Steemit’s Weekend Digest #36: Of Niche Communities and SMTs – A Chat with The Steemian Behind Steemit Culinary Challenge ……. Countdown to SteemFest II…. and This Week On Steemit

It is with great delight I welcome you to the thirty-sixth edition of SteemMag, a weekly digest for Steemians. Every edition, I take a look at some of the most important/trending topics and have a chat with top Steemians who have expert views on such topics.

In this edition of SteemMag, we had a chat with the @woman-onthe-wing, the Steemian running the Steemit Culinary Challenge. Our first chat with the challenge was 9 months ago here making it one of the oldest community challenges on Steemit.

Food Blogging is one of the biggest niches on the internet and it would be exciting to see SMT use cases around such a premium niche.

We also had a mini vox-pop with @elear for the Steemians talk feature.

SteemMag - What inspired you to take over the running of Steemit Culinary Challenge?

@woman-onthe-wing -
The energy generated by the SCC is quite addictive and I was compelled! Previously I'd been a keen participant in the challenge, enjoying having a reason to get creative with food. I'm bored making the same meals over and over for my family, but the SCC gave me a whole community to cook for!

I was invited to join in last year by former host @englishtchrivy when I was still quite new to Steemit, and was quickly embraced into a delightful foodie community full of 'kindred cooks' and people who shared my enthusiasm for healthy choices and creative approaches.

So when @englishtchrivy asked if I'd like to take over, I could only say yes! I wanted to continue this wonderful challenge so the community could carry on enjoying it too, and maybe even sense the magic of it as I do.

SM - SCC is one of the oldest challenges on Steemit, what has been the most memorable moment running it?

@woman-onthe-wing -
It's almost the 1 year anniversary of the SCC, and it's been full of many memorable Steemians, recipes, photography, discussions... so much. The one moment that immediately springs to mind though was @amy-goodrich's thieving Cambodian monkey who hijacked her 'Picnic Alfresco' ! You'll want to see these photos. Ha ha! 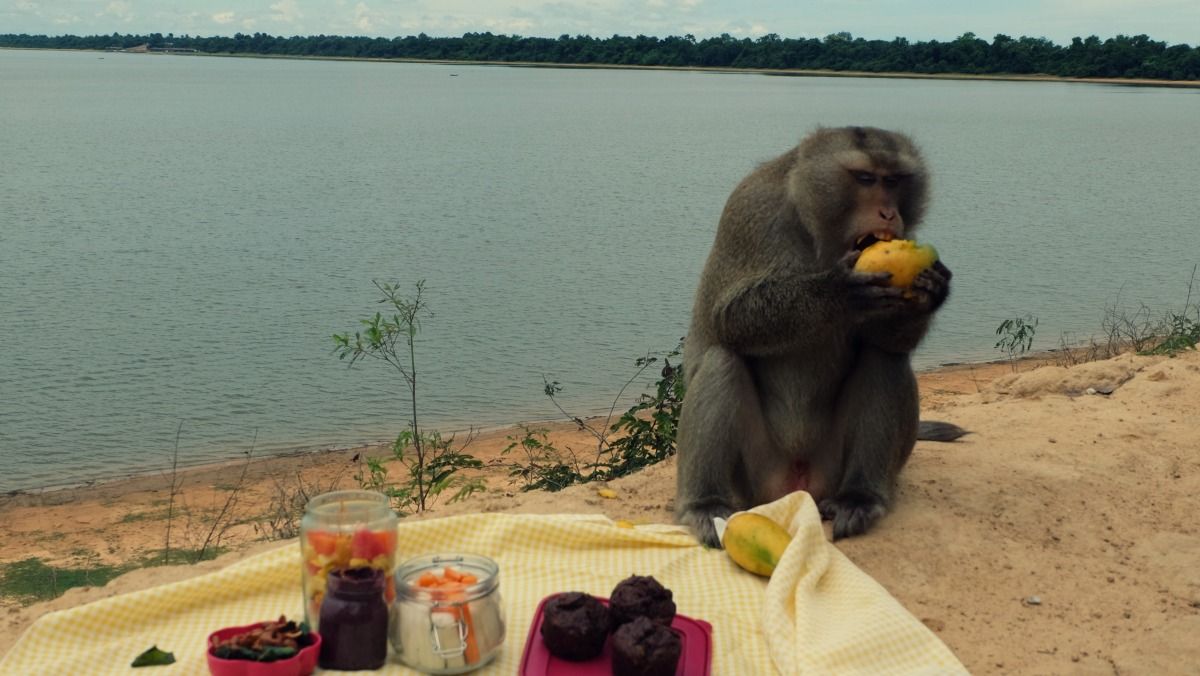 Actually, you know what will be the most memorable aspect of the SCC in years to come when I'm old and grey and gumming my meals? The love. Sounds cheesy I know, but through this challenge, I've been in receipt of and witness to so much sincerity and confidence-boosting conversation that it's literally changed my life. I live in a remote place in rural Ireland, with no car, no neighbours even, and though I choose solitude I still need human connection.

When I look through the entries each week I kinda feel I'm sitting down with everyone to enjoy a big merry feast! It fills me with real joy hearing from participants how they look forward all week to finding out the new theme, or how much fun they have creating their dishes, or what they've learned, or that it's helped their confidence too. It's all been completely unforgettable.

SteemMag - With the launch of SMTs, have you considered creating a token for SCC? Incentivized Food reviews token for example.

@woman-onthe-wing -
I've only just recently started looking into the possibilities that SMTs open up, but yes, they're certainly a consideration for the future of the challenge. I'm pretty excited about these tokens, and their potential to turn individual blogging and community contests into something much bigger for everyone.

I expect SMTs will motivate even more community interaction, enable us to better support the things we're interested in, and will give each person a little more weight behind our choices/actions within the community... and that's just to start. I feel even more hopeful and excited about the future now. The best thing is they could be a real dream come true for all us creative souls who just don't fit into any boxes, who want to make our own way in the world instead of following all these conventional paths, who want to be at home with our families more, and who want to make an honest living doing what we love. SteemMag - Food blogging is one of the most lucrative niches on the Internet, what can we do to attract more niche bloggers to Steemit?

@woman-onthe-wing -
Most Steemit users seem to blog on other networking sites too, so most of us will have followers all over the place we can potentially bring to Steemit. The concept of Steemit sells itself IMHO, so we only have to spark interest enough for our friends to check it out themselves.

Apparently just by mentioning Steemit a few times in my Wordpress blog, some of my followers there are now food-blogging Steemians too. Personally, I can't help but mention Steemit elsewhere now as it's become a big part of my life... and I guess the same will be true for other Steemit bloggers?

Spreading the word about various contests is one good way to attract more niche bloggers... such as how I sometimes share SCC contest posts on my Facebook page. Not only will my followers see the recipes, but they see the challenge actually exists. At least we can safely say there's quality content to be found quite easily in most categories on Steemit, and when coupled with reward incentives, it really doesn't take much persuasion! @woman-onthe-wing -
Yes! I don't want to say too much now, but I'm currently working on a project that should take the SCC in an exciting new direction... all will be revealed very soon! There are so many great food contests on Steemit now that I can't realistically expect loyalty forever or even continued interest from the community, yet it would be very sad to let the SCC fade in the shadows of these other growing contests.

In my observation, the SCC is generally viewed fondly by most, absolutely adored by others, and it would be missed I believe. So instead of trying to compete, which isn't really in my nature, I'm working on ideas for changes.

I feel the emphasis should remain on community and encouraging healthy choices, so that's my starting point for the project. More of the world seems to be waking up to the truth about food and health and wanting good recipes, so here with the SCC, we boldly and most lovingly endeavor to provide them!

Thanks so much for taking the time to speak about the SCC @woman-on the-wing. It was worth the wait! Wish you all the best in your future plans

~ For a comprehensive list of dedicated Steem blockchain apps. Check out SteemTools.com

~$0.97 and $1.18 were the lowest and highest value traded this week for a unit of Steem respectively.

Three Steemians you look forward to seeing at SteemFest II and why?

Thanks for having a quick chat with SteemMag.

This brings us to the end of this edition of SteemMag. More interesting editions in the future.!

Thanks for getting to the end of this weekend's special edition. What was your favorite feature? Do you have any project or Steemian you would like to have featured on SteemMag?

I would love to hear from you!

Have a wonderful day ahead!

Great read! Just learned about steem-mag and what a great concept it is!

very nice post..promote the growth of the community..have a great day bro..

kindly also my article..hope you consider it..^_^ at @mrblu page

Interesting read, I'm new on here and I find this piece educative as well as entertaining, I love healthy meals and I would definitely love to try out the recipes on here. Thanks guys!

Morning all , i just want to say, upvote is free and you not paying for it, you guys can help each other to earn more money. Wow nice one, am actually new here and I am happy to be seeing this post. I have upvote and followed you. Please help me do same for me. Thank you.

I must say I'm really looking forward to where SMT take the Steem Blockchain.

The bullishness of @ned on recent shows I've watched is clear to see. He's confident in the path he's plotting, and it sounds like he has the people behind him to make it there.

I really hope you don't mind me dropping a link to a post in which I'm requesting a few minutes of time from each attendee at the upcoming festival.

I've composed a list (from SF2 site and @steemfest's wallet) of all the attendees I can find, and I would love to see them connect with a short 'brief', and a link to a post detailing a little more about them.

If you are attending SF2 and reading this, please let me know so i can update the table.

Not sure if i have seen your Steem-mag before. I like it. it looks like you have been doing this for some time and have a nice format to it. I found if from a resteem that @mammasitta did of your post. We need more Steem-mags, I have a question? Do you mind that I have been used the tag steemmag? I began using that tag on 9-17-17 on a small mag trying to connect writers and readers. If so I will stop using it, not here to step on toes.

Great Steemit Chocolate Cake by the way... lovely designs you use

This edition is very interesting. Sad i am just seeing it now. You got this thing with steemMag @infovore. Looking to next edition for updates and awareness of whats happening on steemit platform.

Great read! I look forward to meeting you at SteemFest. Only days away now.

Nice Post. This is help for all steemit member. thank you

You are doing a great job, reaching out to people and bring them under one umbrella.
it's great to know that you are back with full force to keep this community going. Your effort is fully appreciated.

This is interesting stuff. Seeing what people are doing on the Steem platform is amazing.

This piece is really insightful.

Now this one is a great read. And yes i followed all the mentioned steemians.

beautiful... the monkey picnic got me well..lol

This will do,in terms of help to steemians as steemians use the information to navigate through...can you do a post similar to this again?

Great read!! I really loved it @steem-mag, hope it will continue in the nearest future

Congratulations @steem-mag! You have received a personal award!

Your publication is great, I would like to invite you to my blog although I am new to "steemit" and I hope you enjoy my work as I do yours, Let me follow you. God bless you.

Lovely encouraging post. I'll be reading with interest in the future.