SteemMag – Steemit’s Weekend Digest #32: Taking Steem To The World: Chats With RandoWhale and The Steemians Behind SteemPark …….. This Week On Steemit… and lots more

Whoops! It’s so cool to be back again. It is with great delight I welcome you to the thirty-second edition of SteemMag, a weekend digest for Steemians.

Taking breaks is probably no longer a new thing for our readers. We either serve you top notch juicy information you can’t get elsewhere or nothing! :) ;) Every issue, I take a look at some of the most important/trending topics and have a chat with top Steemians who have expert views on such topics.

It’s been amazing times since we last had a SteemMag issue and so many cool stuff have happened.

This week, SteemMag had a chat with brains behind two fascinating ideas on Steemit. The first chat is with the Steemians behind Steem Park – A community-backed project to operate a public art/ community garden with the power of Steem.
Next is a chat with the mysterious @randowhale. The whale who took Steemit by storm a couple of days ago. Keep reading to know why it was created and what the future of this fun experiment is.

A Chat With @voronoi

SteemMag: It's been over a month now. What inspired you to launch Steemit Park?

We wanted to explore the impact that Steemit could have on the real world. The two of us (@hansikhouse and @voronoi) have a background in architecture and public art and actually drew us to Steemit initially was the prospect of using STEEM as a resource for design projects. We immediately started planning projects where we could build and fund something through STEEM and Steemit's social process. Steemit Park is just that! It's supported entirely through STEEM and not a single USD. 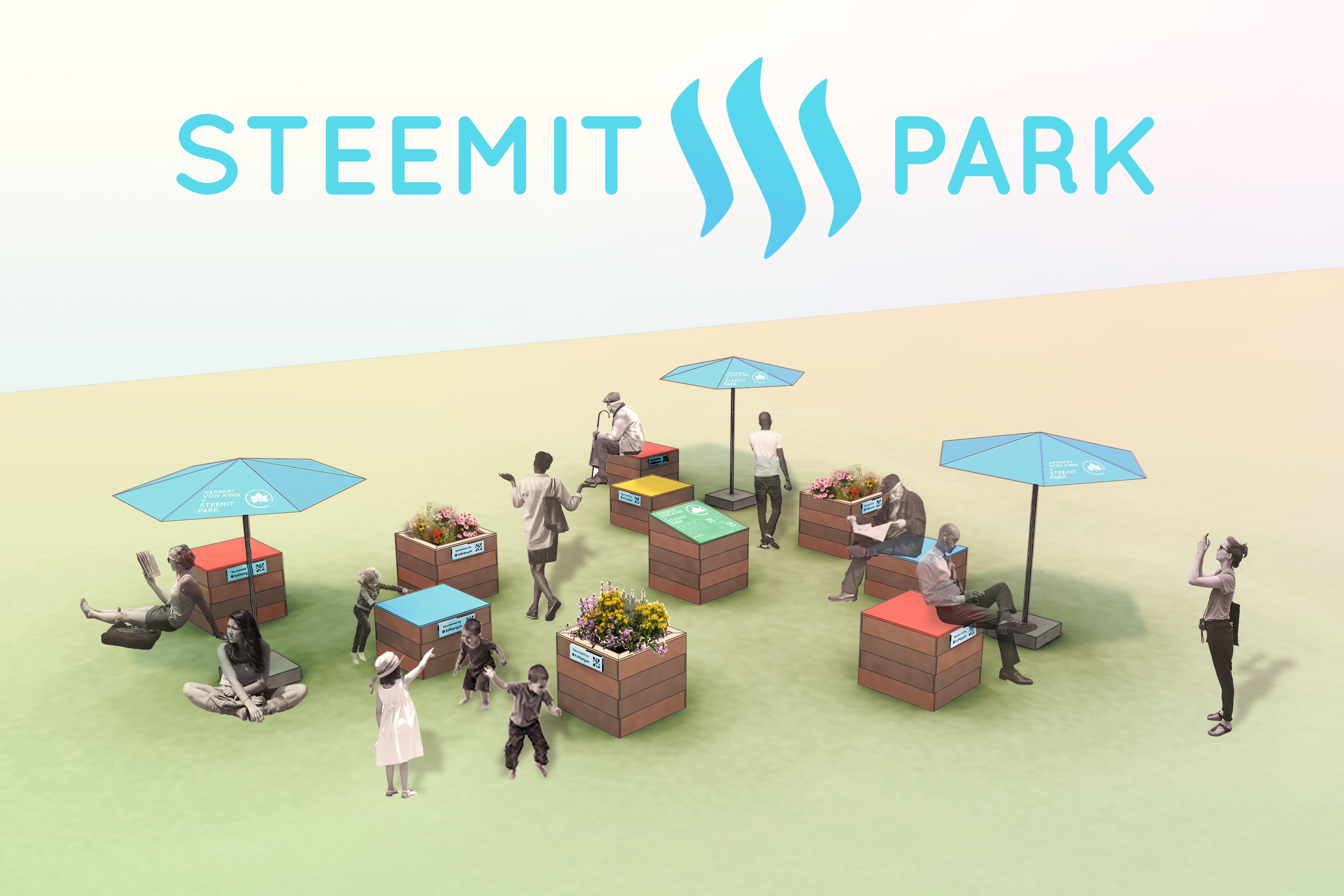 What excites us about Steemit Park is it's potential to empower local communities. We're excited to have the support of the Herbert von King Park Conservancy in Brooklyn, a beautiful park and historical asset of the Bed-Stuy community. If successful, Steemit Park could be a new model for public parks and community gardens to sustain and empower themselves instead of relying entirely on traditional donor models.

SM: How has the Steemit community's response been so far?
@voronoi:
We've been ecstatic with the response. We have the most supportive and enthusiastic community on the internet, honestly. Steemians will have a physical landmark in New York City this summer. Steemit Park will represent a big leap with this digital community getting physical. This is just the beginning of a much larger and much grander footprint for the Steemit community. So far, we have a total of 7 sponsored benches and planters. We've raised nearly $7,500 USD (approximately) in less than one month. We hope that this sets a new precedent for community projects around the globe. Designers, artists, creatives, educations and community leaders around the world can use the power of Steemit to make change happen!

SteemMag: What in your opinion do you think should be the done to encourage talented artists to join Steemit?
@voronoi:
That's the million-dollar question. We need to better showcase how STEEM creates impact and can mobilize artistic production. It's not just an investment opportunity, it's a really exciting social resource for creatives. Steemit Park is an effort on our part to exhibit a physical representation of this online economy. Each bench or planter is like a building block that was literally brought into existence through STEEM.

SM: Your plans for the next 3 months? And what Steemians should look forward to?

@voronoi:
Stay tuned for a big announcement in July. The next three months are going to be very disruptive for the creative community here on Steemit and for those who have yet to join. We have some very exciting news that has been brewing for the last several months. Steemit Park is just the beginning!

After such a long wait, it was awesome finally having a chat with you guys on SteemMag. Wish you all the best in the pursuance of this lofty project.

SteemMag: What inspired @randowhale and how has been the response so far? @randowhale was inspired randomly during a conversation about voting, developed that same evening, and then announced just to see what would happen. The response has been far greater than anticipated. User’s started using
@randowhale to bump their own posts, in both rewards and visibility, and then it clicked for many that they could use it to reward others. Over 20% of @randowhale’s activity so far has been users rewarding other users, which hopefully will increase! SM: Is it going to be a long-term experiment and are there future features to be expected?
@randowhale:
Yes - @randowhale isn’t going anywhere and will continue to serve the people of Steem. New features are being discussed to improve the service and increase its impact. Nothing is ready to be announced at this time though. One of @randowhale’s strengths is in it’s simplicity, which is not something that is likely to be changed.

Nice to have a chat with this mysterious whale. Interesting to see how something fun-random can be embraced by the community.

Have you used @randowhale before? What was your experience?

A lot of interesting events happened this week. And in case you missed them, we’ve got your back. Here are some of the most important events that happened on Steemit this week.

~@steemitblog pre-releases information about HF19.
~ @roelandp releases more information about the upcoming SteemFest 2 holding in Lisbon. Can’t wait to see you guys there!
~ @jesta and @good-karma releases regular updates to ChainBB and eSteem mobile app respectively. Go check them out now!
~ For a comprehensive list of dedicated Steem blockchain apps. Check out SteemTools.com
~ Steem drops to no 16th on the coinmarketcap.com’s crypto market capitalization list.
~ Meanwhile, SBD rates ranged from 1 SD = $ 1.54 – 2.0 this week
~$1.98 and $2.44 were the lowest and highest value traded this week for a unit of Steem respectively.

P.S Thanks for getting to the end of this weekend's special edition. What was your favorite feature? Do you have any project you would like to have featured on SteemMag?
I would love to hear from you!
(And don’t forget to follow all interviewed Steemians!)
:wave:

Nice post man i am 14 years old and i am trying to get young people like myself to use time on steemit to benefit from there skills :) you are a real inspiration and if you could support my post by upvoting that would mean a lot ;) i upvote all your content

Would it be ok if i asked you some questions related to steemit?

Of course! There's a ton of people on here that know WAY more than I do, but I'll do what I can!

Here's a great article on re-streaming...

As far as upvoting, you only get a certain amount of power. You start every day with 100%, and it goes down from there, so you really want to only upvote the articles you benefit or appreciate the most. You don't have to upvote at 100% power either...once you can upvote at least $.02, you'll be able to modify how much of an upvote you want to give. Hope this helps!

you also answered my own unasked question sir..thanks..will be glad if am being followed by you..thanks

@steem-mag! Thanks so much for the opportunity to share more about STEEM Park! It was awesome talking with you.

Great work! I'd love to be a part of your next issue - I have quite the story to tell and I've been a huge part of growing the minnow community here.

Let me know if you'd be interested in chatting ;)

I am a huge fan of eSteem app. I just recently was unable to use my work computer for any personal browsing due to the recent malware attacks. Now I can keep up with my postings on downtime at work. I am a huge fan of eSteem. Also great post. Just found you, but now following and looking forward to more. I like the idea of interviewing other steemians👍

This is great to see the famous Steem Park and the @randowhale getting exposure here, they are such fantastic initiative. Thanks a bunch for sharing it all with us.

what if in order to obtain some higher level rank as a Steemian, you had to actually go to STEEMPARK. upvoted and followed @steem-mag. Keep up the good work!
.... (no religious reference, just a thought :))

A lot of great information! This is my first time hearing about randowhale and it's definitely a cool concept. Spreading the wealth is something I can always get behind. I'm also interested to see where things go with Steemit in the future. It's a creative platform looking to disrupt the monotony of social media. I'm very optimistic about it. Keep up the great work!

Cool, stumbled over your piece as berniesanders resteemed it, and I am glad I did. Good read. Steem on with this project ;)

This is Incredible and inspiring post. Have UPVOTED! You can check on mine @myhealth hope you will enjoy.

Welcome to Steemit :)
I follow u, follow me back if u want lot of fun and amazing picture every day.

Looking forward to do it

Ohhh good to know about @voronoi project. In the case I stop by New York next year, I know where I will go :D

This is pretty innovative. Well done guys and will make sure i follow up with your posts for updates. Plus cant wait for what you have for us in July. These are the kind of things that really makes this place a community

thanks for your dedication and guidance..it really means a lot to us newbies...need followers though,still fresh on the platform...feel free to follow thanks.

A great post... I need help.. i'm new in this community, can you upvote in my first post? thanks for the support <3

@randowhale looks like a really nice way to help out your friends that are new to Steemit.