Sneaky Ninja Reminder of How he Works
(Vote worth $160 now!!) 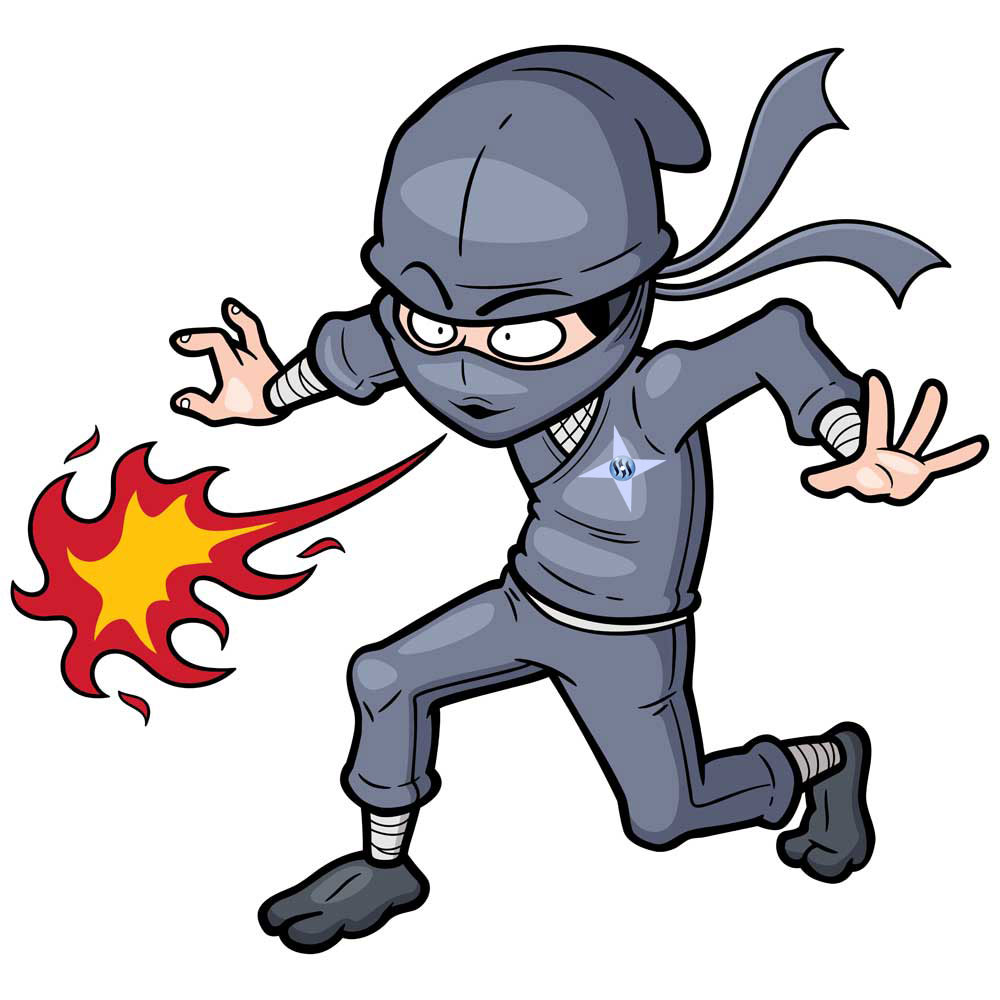 Here is a reminder of how Sneaky Ninja works.

Ok, Sneaky Ninja is a bid bot much like all other bid bots.

Unlike most bidbots, Sneaky is also a character with a running story as well so be sure to check out his story as it unfolds. Here are links to his previous backstory post: Part 1 - Part 2 - Part 3 - Part 4 if you would like to read them.

This enables you to place a Bid on a partial upvote at his full strength. So if your bid equals 5% of the all bids within the same 2.4 hour time period, then he will upvote your post with 5% of his full vote respectively.

So, you will basically never get the exact same vote for the exact same bid each time. The vote value you´ll receive fully depends on the total bids submitted and the size of your bid respectively.

Let me give you an example of how it works.

Let's say 5 fish buy in during a 2.4 hour period at these percentages of the total buy in for that period... 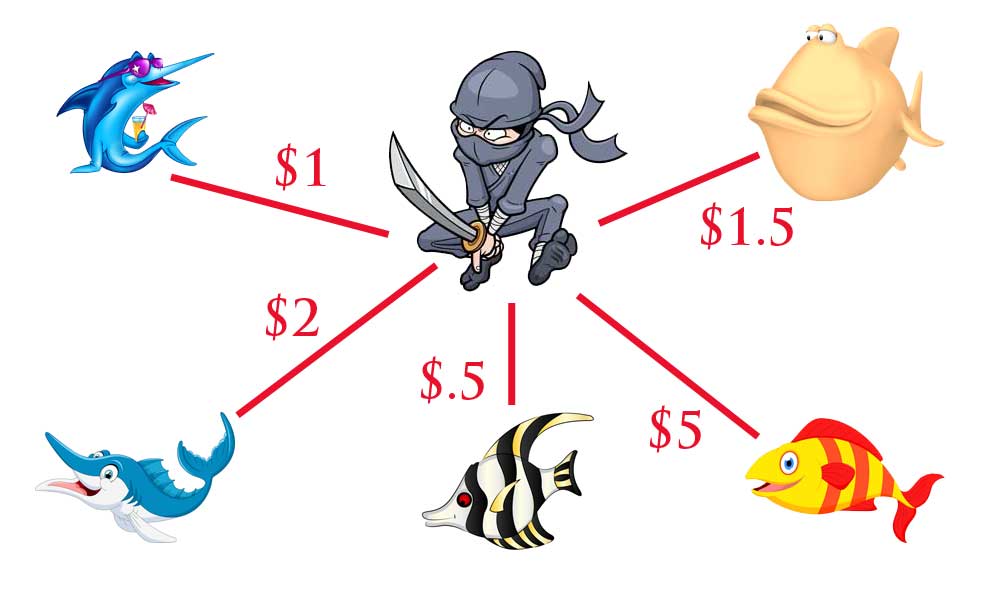 Let's look at another example.

Three fish buy in for these amounts and percentages during the same 2.4 hr period... If Sneaky Ninja's 100% upvote is again worth $10 then the payout would look something like this... 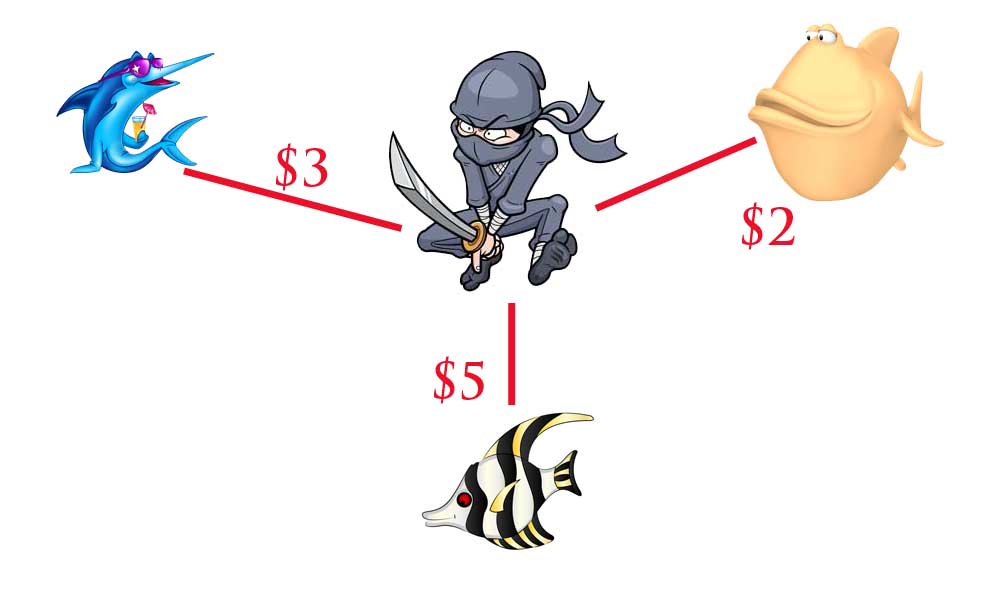 Now, if you would like an easy way to know what your vote may look like @yabapmatt has created a handy tool called the Steemit Bot Tracker for this. This tool works very well at showing you how the bidding rounds are doing and just how your vote may land.

This is a link to the Steem Bot Tracker

As always, I appreciate all of the support that you all have given to Sneaky Ninja. 😃

May all your battles be victories!

Sorry there were server issues with the bot yesterday. I just refunded you :)

hi. I send you 2.5 SBD 2 hours ago and give this link https://steemit.com/resteem/@dumitriu/free-first-10-user-last-post-resteem-68-to-1000-stemmians-please-be-original-if-not-i-will-not-resteem-your-post
but you didn't upvote my post.
Please refund.
Thank you

I got ya man. one comment is enough unless you don't hear from me for over a day. Steemit does not have a good message system so I only see these if I log in. I usually only log in about once per day.

Hi Ninja, I sent 0.509 SBD 50 minutes ago, you replied that the post was upvoted but I did not receive the vote; 50 minutes ago Transfer 0.509 SBD to sneaky-ninja https://steemit.com/steem/@dankh/market-open-update-on-steem-usd-sbd-and-silver-slv-1-9-2018
Please advise

You got a 1.02% upvote from @upme requested by: @michaeldavid.
Send at least 1.5 SBD to @upme with a post link in the memo field to receive upvote next round.
To support our activity, please vote for my master @suggeelson, as a STEEM Witness

I gave you 0.520 Sbd. You gave me Upvote but again I picked Upvote from my post. Please give me sbd.
https://steemit.com/mustafize/@sojibul999/mustafize-rahman

hi. I send you 1.000 SBD 37 minutes ago and give this link
https://steemit.com/dmania/@talhadogan/rare-and-interesting-photos-2-zg1hbmlh-dsqxh
but you didn't upvote my post.

It can take up to 2.5 hrs to get the vote. They are not immediate. When you send a bid it is part of a 2.4 hour bidding round. This might help:
https://steemit.com/steemit/@sneaky-ninja/reminder-how-to-use-sneaky-ninja

But I don't yet receive an upvote
Thaks

It is nice and dangarus.

This was amazing to read... Your exit credits are above and beyond.

hi. I send you 9 SBD 3 hours ago and give this link
https://steemit.com/tellmeurwish/@omani02/omani02-2018
but you didn't upvote my post.

Please, one message is enough unless i don't respond for over a day. I am not on all day, only about once per day. Refunds usually will take a day to get unless I'm on and looking at replies and can see your comment right away. If I don't get on for a day they may take 2 days but you will definitely get it. We have steem developers to thank for that. Our message system is pretty lacking.

What's up ninja?? How are you

Are you going to pay back? I'm sending sbd. does not come upvote. Send it upvote or make a refund. I am still waiting. Thank you.

I refunded you just a few minutes ago. One comment is all you need to leave unless i don't respond for over a day. Steemit communication sucks so I wont see your comment until I log in. That is usually only once a day. So when you leave a lot of comments i see them all at the same time. No worries though I always give refunds for missed votes.

hi. I send you 2.000 SBD 53 minutes ago and give this link
https://steemit.com/dmania/@talhadogan/the-bubbles-palace-nice-france-zg1hbmlh-a5b0p
but you didn't upvote my post.

This vote was missed yesterday. Sorry for that. I just refunded you.

Sneaky Ninja Attack! You have been defended with a 8.72% vote... I was summoned by @michaeldavid! I have done their bidding and now I will vanish...Whoosh

I really like your service. However, alas, there was again a problem. I made a bet of 0.5 SBD and memo https://steemit.com/bescouted/@vladkuneberg/theatre-2 but for some reason it was not placed in the queue. And in general it was gone. : ( Upvote, too, was not.

You got this vote:

sneaky-ninja (57) · yesterday
Sneaky Ninja Attack! You have been defended with a 0.65% vote... I was summoned by @vladkuneberg! I have done their bidding and now I will vanish...Whoosh

The vote is there also.

It takes up to 2.5 hrs to get the vote.
https://steemit.com/steemit/@sneaky-ninja/reminder-how-to-use-sneaky-ninja

hi. I send you 2.000 SBD give this link
https://steemit.com/dmania/@talhadogan/the-bubbles-palace-nice-france-zg1hbmlh-a5b0p
but you didn't upvote my post.

you were refunded for this :)

This post has received gratitude of 1.66 % from @appreciator thanks to: @michaeldavid.

sneaky-ninja introduced me to other aspects of the alliance. I'd start giving you contributions, but I'm waiting on confirmation of my membership!

I just sent your refund.

Thank you for this info @sneaky-ninja.. I am just new here and for a newbie like me it is helpful to have such a good explanation like this.. Hoping to have more simple yet clear explanations on other things..thanks Hello @sneaky-ninja, I sent you this amount for your vote, and you have not voted for me. Check your operation. Thank you.

cool, one more addition to my blacklist. Awesome!

I do not tolerate harassment in any way, in any form.

I have stated very clearly, if you bothered to read... I only see these messages if I am logged in. Steemit does not ping you if you get a message. everyone on this platform knows it.

Leaving this many messages has just won you a trip to my blacklist...

hope you enjoy your stay.

Sorry if I bothered you,i sent you-2.446 SBD
, this is the link:
https://steemit.com/spanish/@laura97/hierbas-ayudando-con-un-envejecimiento-saludable

Cool service have you here! Followed you to keep you close in case I need you. Not just yet, I just landed in the steem. :)

Good job i upvote u please vote me back we can help each other here !!