The making of a comic - How to end a comic album

How to end a comic album 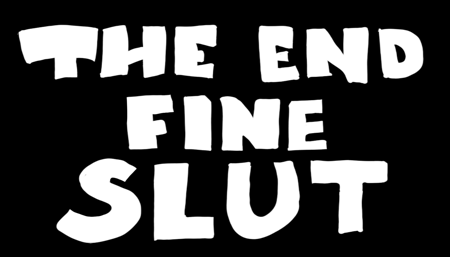 The End, written in three languages: English, Italian and Danish

This is part of an ongoing series about how I make my comic about Phill from GCHQ. If you are interested in reading the actual comic you can find it here:

And the earlier chapters of this series can be read here:

I am working on the last page of my comic about Phill from GCHQ - not the end of the story but the end of what is to be the first album.

Phill from GCHQ is, even though it is inspired by the American underground-artists Robert Crumb and Gilbert Shelton, a classic European comic - so I have been looking a bit in my album collection to see how others ended a serial album in this tradition.

Let's start with the crown jewel of European comics: Tintin.

Hergé, the Belgian author, made some of his stories stretch over two album. One of my favourites is the double albums, The Seven Crystal Balls and the Prisoners of the Sun. Gwendolyn, the high priestess of the Celtic cult reading The Seven Crystalballs. Frame from this page of my comic

The adventures of Tintin consisted of a mixture of gags, exotic adventure and mystery - but the laughter is probably the most important ingredient. So The Seven Crystal Balls ends with a joke. But before that the top frames and half of the next is used to finish the plot and set the stage for the coming adventure: going to Peru to free the kidnapped Professor Calculus (Tournesol).

The gag is that Captain Haddock, the drunken sailor who in the previous albums got rich and even a nobleman, has changed his style and is wearing tweed and a monocle. His new butler, that he somehow inherited too, is trying to deliver a spare eyeglass before the arrival. Not necessary though. The captain has changed back to his old outfit for the adventure. 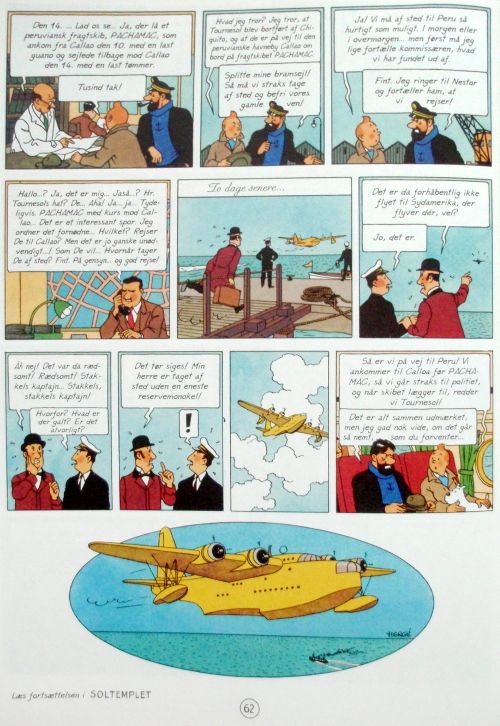 A stunning oval image of the plane that will bring the two heroes (three if you count Milou, Tintin's dog) to Peru ends the page. Notice how the tip of the wing exceeds the oval frame as if it is flying right out of it.

The next album I have been looking at is The Luminous Incal, Moebius and Jodorowsky's psychedelic space opera from 1982. While Tintin was made as a serial in the newspapers before being collected to an album, the French albums of the late seventies and early eighties had developed into a creative tour de force of artistic freedom, not least thanks to Moebius (Jean Giraud).

The album, the second in the series, ends in three large frames, slowly zooming out on a large maelstrom in a green acid-lake. The band of heroes is clinging to a floating spaceship that they have used as a raft, and we slowly loose sight of them. In the last large frame only the green acid vortex is seen. Remember that this page is the same size as the Tintin page above (A4). The images are huge!

It is clear that theIncal comics was made and planned as albums from the start and that none of the restrictions that the newspaper format put on comics mattered. The ending has a classic cliffhanger, but is more than anything a splendid layout. I do remember being very intrigued by what was to come in the next Album, What Lies Beneath, that is announced in the text line at the bottom of the page.

Telling the story until you run out of paper

The last example is from Pierre Christin and Jean-Claude Mézières' Valérian and Laureline. It is from the album named, The Ghosts of Inverloch, which was part of a four album long arch that was a major turning point in the series. As in the Incal series Mézières and Christin was working on the comics as albums and they were masters of telling a original and beautiful story on 48 pages. But in these four albums they created a very long and complex story full of mysterious happenings that almost fell over each other. The Ghosts of Inverloch, which is the third album of the four, barely has space to end so much do the two creators have to tell. 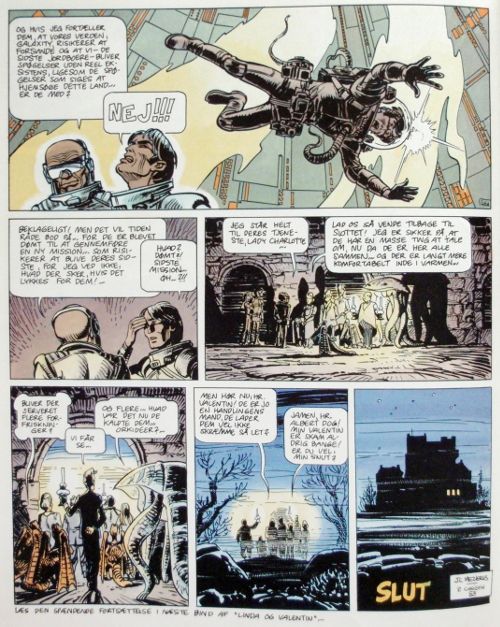 As you can see there is a lot of characters that has to do a lot of talking, and the end frame, showing the castle of Inverloch that the album is named after, is the slimmest frame on the page. ("Slut" means "the end" in Danish... yes, go ahead laugh...)

There is no doubt that the two creators had a hard time compressing the very ambitious story into the pages, and it is clear that they would have loved to simply continue for 48 pages more. But this was made in 1983 and at that time no one knew that inventing a new name for something that already existed (Comics -> Graphic Novel) would make it possible to make albums that exceeded the old restrictions of 48 pages. (note that Tintin due to its enormous popularity was 62 pages).

The ending of the first album of Phill from GCHQ

I have been working on the last page and it should have been finished tomorrow - but after I had a closer look I decided to make some large changes as I was almost ending up like Mézières and Christin. Instead I have removed some of the things I already made, and saved it for later use. The page will be close to the Tintin page with Phill and Gwendolyn recovering after the TERRIBLE REVELATION!! in the last page, after that there will be a small joke, and I have even placed a nice oval frame at the bottom as a subtle hint to The Seven Crystal Balls.

The images used in this post is by myself and photographed from my album collection... that is why they are in Danish.

I remember Jodorowsky's The Metabaron's Saga (One of my favorite comics ever) and its ending. It was an AMAZING way to do it.

My "other" favorite comic ever, Sandman, ended splendidly... about two or three comics before the last one. I always saw that one as the real ending, and the rest as a sort of "extra".

And a great comment! After all the stupid spam-comments you deserve a good upvote (or as giant as I can :) for being the first one with something real to say about the post.

The Metabaron actually is on the Incal page clinging to the spaceship with the other from the motley crew of protagonists.

Why, thank you! I mean, i always try to comment with respect, trying to add some value and, heck, after actually reading the post. :)

Yeah, the metabaron is in the incal all right. He has his own regular series, too. Good Stuff! The "Saga" is a masterpiece, man. Is two real, actual geniuses working together at their very best. One of my favorite lectures of all time.

Hehe, you can thank the stupid spammers. I was a bit tired of nonsense as the only reaction to my post :)

The Metabaron saga is on my to-read list. I have looked through it some times but I want to read it all from the beginning to the end - I'll order them from the library soon.

Wow, that's a great breakdown and comparison on ending comic book pages...gave me a lot to think about since I know how my story ends, but I hadn't thought about what the last page will look like...

I'm glad you're doing a series on how to make comic books, I still got a lot to learn!

I have a lot to learn too, so this is just the analyses and principles I try out in my comic. I am mostly a pictorial artist and I am very focused on the artwork and the eternal lack of space - but I have written fiction too and it is a very interesting for me to make the two things meet. Comics is one of the most complicated things I have made.

This is the end, fine slut!

EDIT: Damn, I was beaten by @movievigilante :(

He is fast that guy!

The End Fine Slut. I can't help but laugh at that :)

Fine is very close to the French spelling for "end" which is "fin" but I never realized that "Slut" was how it was spelled in Danish. Very different meaning when you read it as English.

When you put them all together, the phrase takes on a different meaning.

Come for the promise of attractive, promiscuous women; stay for the lesson in comparative languages.

Yes, that is how we roll these days in the Copenhagen Comic College.

It was very intentional :) when writing in a foreign language you sometimes get to see your own language in another way.