As of this writing, we are at about $7,610 and as the chart shows below, the decline towards wave 5 is well in progress. This wedge pattern is expected to play out and the fractal that was introduced in detail during today's mid-day update calls for a bull wick spike down. We could potentially see a reange of $7,500 to $6,900 or so. 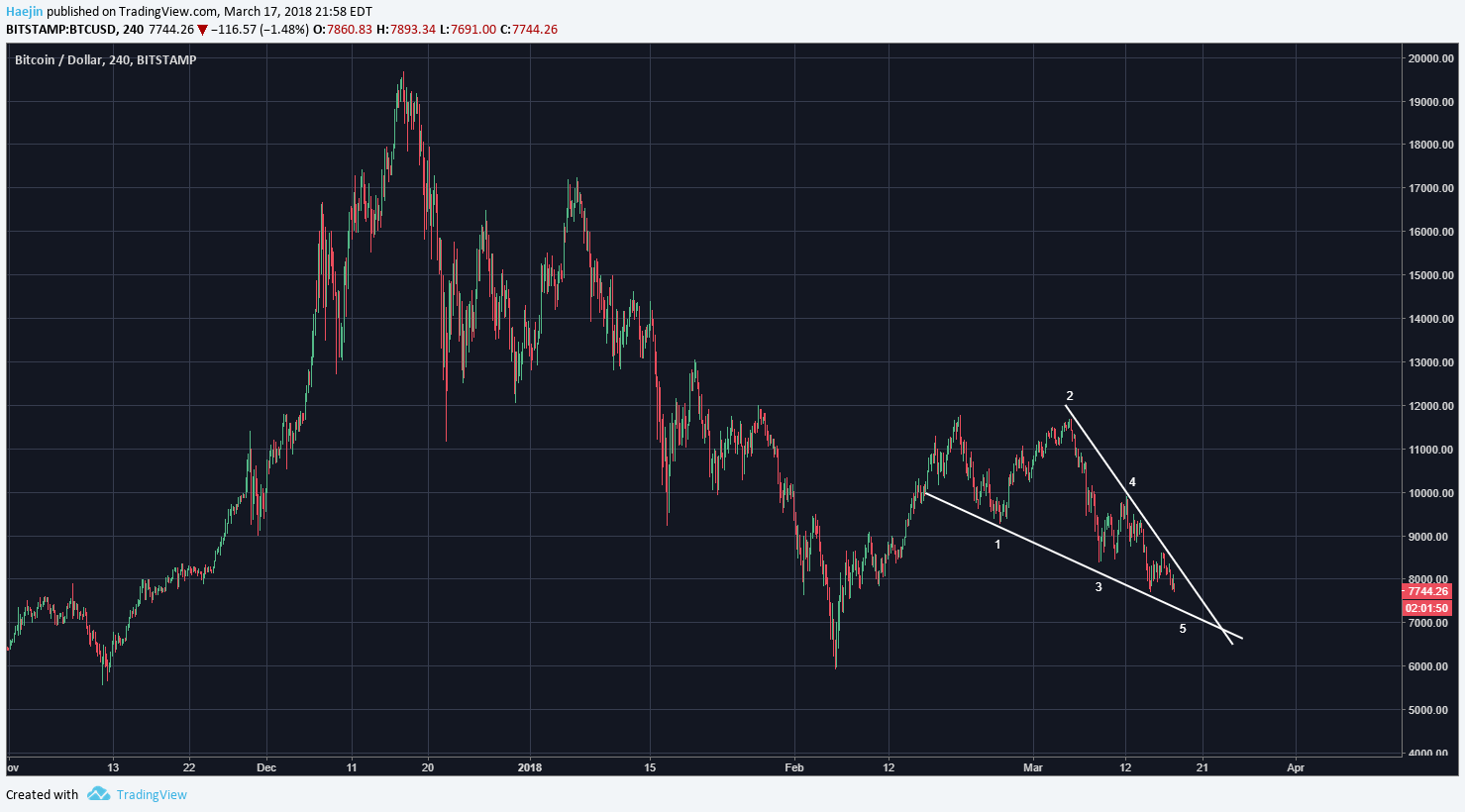 The critical juncture shows that the blue C is currently in progress and the lower white line support has been a strong one for quite a while and should hold and allow for blue wave D to take place and then E. The criticality of the support holding can't be overstated. Let's see how the overnight price action plays out! Exciting times are ahead of us all! Personally I do not see anything but bearishness. The week and day closed lower indicative of a further drop. A day close below 6812 should retest February's lows or more. The same view w/o change since near approach of 11,705. I still want to buy, but at a lower price.

Spread, spread, spread your buy inns and be patient. It's better to buy too late at the start of a bull market then to buy too early in a bearish one!

good advice - the problem is deciding how low to set buy orders !

Well the biggest potential downside to spreading your buy ins or "Dollar Cost Averaging" is that a bull market might never happen again lol. That is the obvious potential danger that people need to take into account, and not just put the blinders on and say Bitcoin will 100% go up over the long-term! It might, but it also very well might not ever go up again.

@Haejin I no longer believe anything you post here on #Steemit.

My friend, you're making the mistake of being 100% in or 100% out of someone. Just use several chartmakers and other information. Put this all in a big blender and try to find out your own feelings about it after all.
Good luck!

For future viewers: price of bitcoin at the moment of posting is 7716.70USD

BTC would be even higher...
BUT he was wrong - in technical local trend - and HE IS STILL wrong.
He had several times -" HAVE to - go up "- but BTC go down and down...

When you are on the market - you can't opt ONLY on one side.

If we daily close strongly below the falling support line of the Falling Wedge (meant to always be a Bullish Pattern, but with Bitcoin who the f knows lol) in 11 hours time, I believe the up-trend everyone thought Bitcoin had started was just another bull trap. Obviously if it breaks the falling resistance line strongly upwards instead, then we could see at least another decent bull-run. I do believe overall these crypto prices are unsustainable long-term and I have talked about this in my latest post if anyone wants to read more about my thoughts on this.

Edit: Doesn't look like we are still in the falling wedge to me anymore, because if you draw the line based on the first two significant lows within the so-called Falling Wedge, then this line tells us that we already broke out downwards: I do see many people however still drawing it how I drew in the first image of this post which I am really starting to believe is the wrong way to draw it simply because if you were drawing that trendline live as the pattern was created, the line in my second chart would certainly have been drawn first. Price clearly closed below and then re-tested that line.

This is a lesson to be learned for me and anyone else who is prone to this mistake. If you are just drawing the trendline for the first time on a chart for a pattern which has been going for some time, think about how you would have drawn your trendlines if you had been watching it unfold live from the moment the chart pattern started.

Not looking good either way for Bitcoin.

I love your posts, but it seems like we don’t need them anymore due to the fact is every altcoin follows bitcoin.

But your posts have helped me so I’m torn.

True. But take note that altcoins can rise and fall regardless of bitcoin's price. (e.g. NEM and BNB rose in price a few days ago, even though bitcoin was quite stagnant).

NEM isn't an altcoin...but I get your point

I heard somewhere that everything besides Bitcoin are altcoins

uhh. what? Anything that isn't bitcoin is an altcoin, whether or not how good or bad the altcoin is. We're talking facts here.

"NEM isn't an altcoin" Uhh, you're gonna have to qualify that statement.

I'm generous and move beyond BTC to include the top 5 or so, but beyond that you'd be in altcoin territory.

This isn't exciting...it's actually making me stressed out and sick to my stomach...it will be exciting if we get out of this long correction and have a long bull run...I'm praying soon.

According to you it seems like you believe in Bitcoin ! Short term price movement shouldn't bother you then my friend :) But i can't deny the stomach feeling tho :P 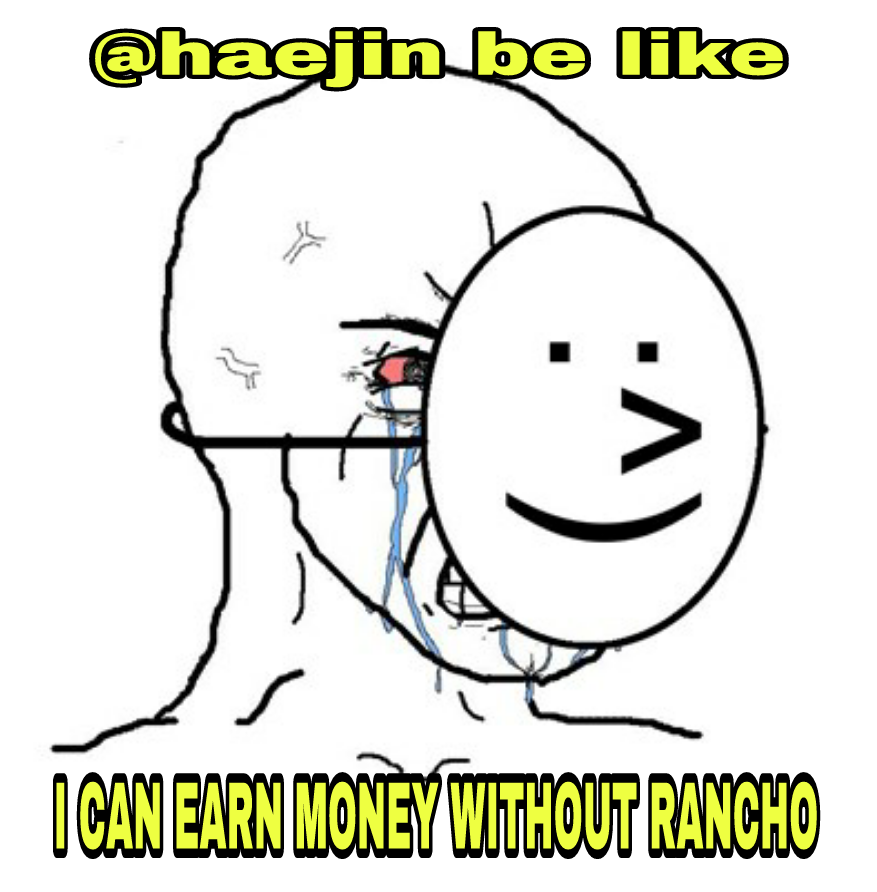 What happens if C drops past the trend support line? Go down to which next support $?

That would be the thinking, yes. But greed for cheap BTC would never let us get below $4k is my thought. Perhaps 4800-5200 max.

I would not mind seeing it that low to scoop n buy more BTC with all the money I got.

How do you feel about the death cross forming??

Thanks man, we will look closely to the support line the next day. It should bounce of and we will be on the lookout for higher highs in the upcoming weeks.

Quote: ".........the lower white line support has been a strong one for quite a while"
Guys, take a good look at that chart! That support line is drawn completely wrong. It has to touch point 1 and point 3 but on @haejin's chart it doesn't. He uses the unlabeled point between 3 and 5 to draw that line.

Why is this important to know. Because when he had drawn his lines the right way it would have shown that this line already has been broken at the unlabled point.

The support line is about to get broken for the second time making it more and more weak!

Agreed. on my chart, it shows already broken. And if you change to 1 hour chart, it is clearer.
And frankly it is not exciting time for people hodling them especially all the way from the top. When price falling like this, most long traders will watch for signals, the only people are laughing are short sellers.

My latest blog post may help alleviate some FUD. Check it out and upvote please!

Congratulations, your post received one of the top 10 most powerful upvotes in the last 12 hours. You received an upvote from @ranchorelaxo valued at 128.01 SBD, based on the pending payout at the time the data was extracted.

I think BTC could go back down to near $6k since it was that far down recently.

@haejin candlestick formula, chart is not 100% right all the time. But you are doing great job. Thank you very much.

Let's not worry about it stay positive!

this is absolutely a work of genius understanding, keep putting this up and it really wonderful to always see your post...

We just need to wait it out. Hold your coins everyone.

Congratulations @haejin, this post is the forth most rewarded post (based on pending payouts) in the last 12 hours written by a Superhero or Legend account holder (accounts hold greater than 100 Mega Vests). The total number of posts by Superhero and Legend account holders during this period was 43 and the total pending payments to posts in these categories was $2383.54. To see the full list of highest paid posts across all accounts categories, click here.

For future viewers: price of bitcoin at the moment of posting is 7716.70USD I agree with you. In my analysis, I predict BTC will down to 7200 before bounce back. You can read it here: https://steemit.com/bitcoin/@cryptocurrencyta/btcusd-technical-analysis-18-03-2018

For future viewers: price of bitcoin at the moment of posting is 7563.70USD

You are a total fraud. Head and shoulders to the moon haha. You just talk shit.