The Balloon is Finished

I added layers of color to ropes, outlined with complementary colors, yellow outlined with purple, blue outlined with orange, and so on...blended in the colors, outlined in black . I then whet over everything with white gouache for kind of a ghost white outline. I finished up by adding some stars, they just kinda happened when I thought I was finished. I thought the blue was dark enough to support stars and I like that last minute idea turned out. I will be working my way down, finishing up the girl and her basket and hopefully finishing the Chickensaurus before this coming Friday. My Grandson loves the balloons and told me the ropes turned out perfect! He said, "better than what you had before." I told him as I tell everyone, don't judge my second layer, I have one more layer to go...hahaha

How birds evolved from dinosaurs.n the 1990s, an influx of new dinosaur fossils from China revealed a feathery surprise. Though many of these fossils lacked wings, they had a panoply of plumage, from fuzzy bristles to fully articulated quills. The discovery of these new intermediary species, which filled in the spotty fossil record, triggered a change in how paleontologists conceived of the dinosaur-to-bird transition. Feathers once thought unique to birds, must have evolved in dinosaurs long before birds developed. The dinosaur and the gravity paradox. 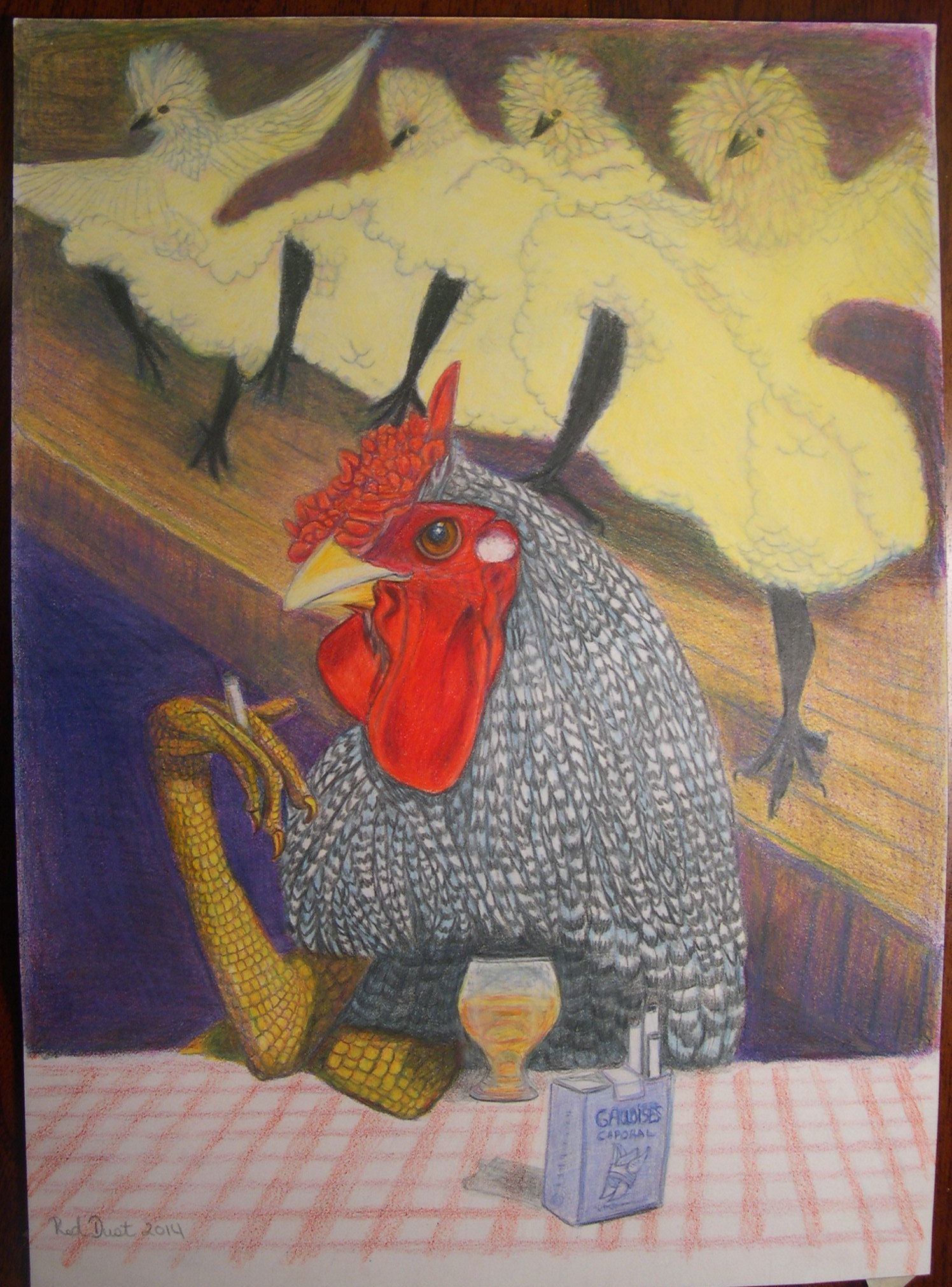 Prisma color pencil on mixed media paper, 2014
Can We Grow A Chicken As Big As A Dinosaur?
WIP One
WIP Two
WIP Three
WIP Four @reddust,
Oh my dear friend! This is an amazing artwork! I have no words to express my feeling about this artwork!

Brilliant, great piece of art! Luv the girls smile. Seems like Chikenosaurus is in awe of her smile too :D

Thank you @pengenkaya, I do love detail and working with color. I just got back from my evening walk, I wish you and yours the best of health.

This is quite good. Love it in fact. I suspect you'll mesmerize your grandkids and move them to become artists too. Many blessings.

I inspire them to get their paint sets out and paint with me. That's how I learned how to draw, my Mom was an artist. She didn't teach me, I watched and copied her...This is how I am teaching my Grandkids.

What did you use to make the rope twists? A black micro pen?
You could have done it with a brush...
I just can't quite tell what color the lines are.
Did you shade the ropes after the lines, or before?

What are the two colors you used on the yellow rope?

I agree that the stars worked out lovely!
Very very nice.

I wanna ride too!

I used Pigma colored brush pens. I used Hanza yellow and orange, with purple outline for shadowing, I outlined with the pen brush and went over the whole thing with very tiny 000 brush with zinc white gouache. I shaded the ropes before I outlined with my Pigma brush pen and added the white gouache for highlights.

We can go for a ride together, I have another rooster who gets along with mine. Most of the time you can't put two roosters together because all the want to do is fight...Thank goodness the Chickensauras is smarter than our domesticated chickens...

This has been a blast and I must confess I used some of my new watercolors on the ropes. They are soooo nice...hahaha

a beautifully painted artwork @reddust. very fascinating with its colors and very beautiful painting techniques You are great in the field of painting my love because all your paintings look very beautiful and Natural Success always for you

You are so amazing good. I love and admire you drawings. You are so so talent😍

You're welcome! It's as wonderful as you make those drawings that make drawing seem easy. You are incredible ... Happy night😊💙

wow Many beautiful chickens have been taken into the picture 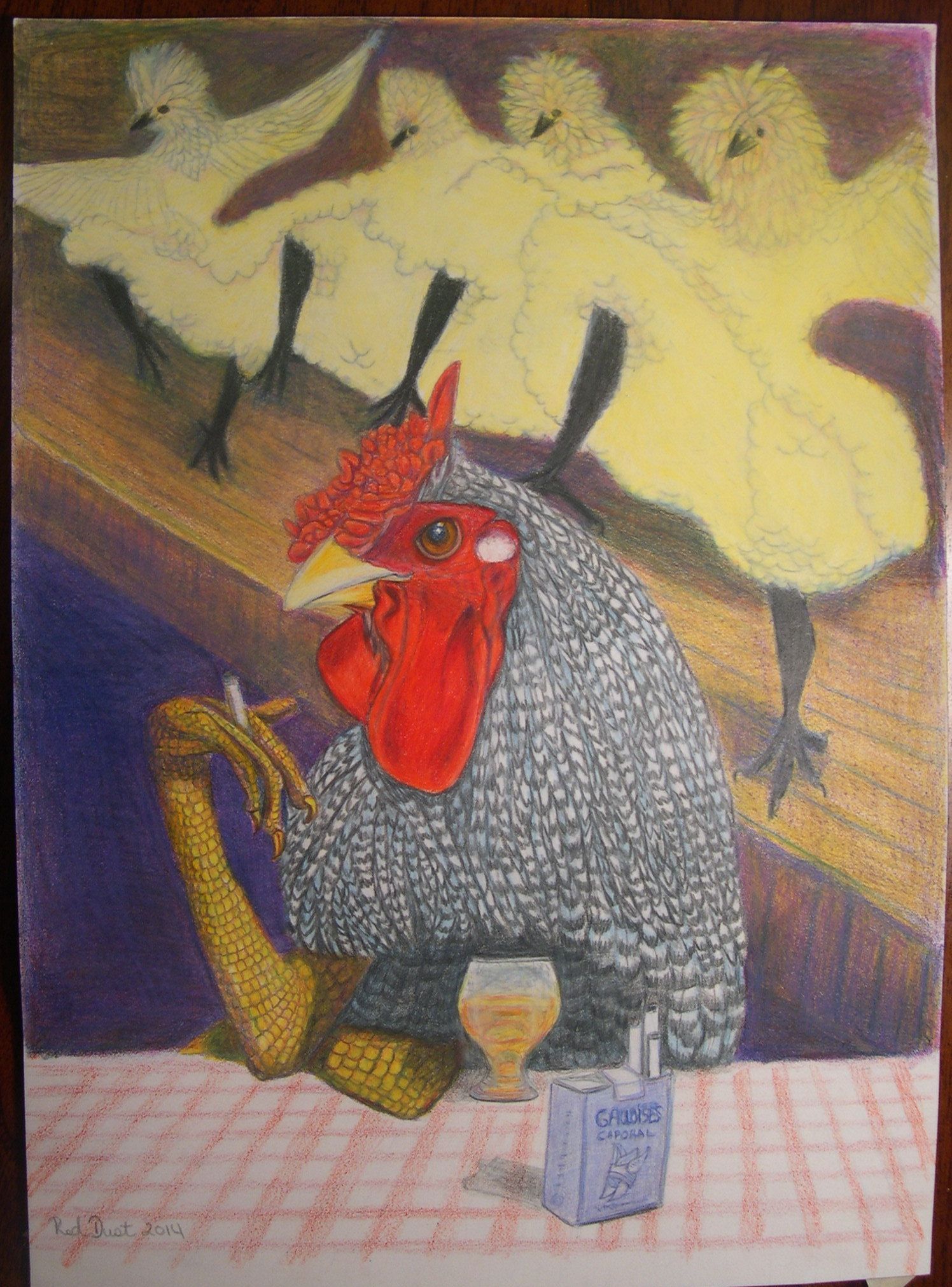 Your drawing looks like a real living object.honestly speaking, this is better than the computer shop printer in our nearby place, lol. by the way, what a talented hand you possess buddy

This is an awesome art photography. Its really amazing photo and also creative art. I really impressed your drawing.

@reddust,
I like this illustration! Specially the sky which is show on the phase of balloon! Amazing artwork is building again! This is what you always do my dear friend!

Cheers~ have a nice day

wow!
amazing concept of creative ideo of art community
just a fentastic art colour combination ..no dout its a great lovely painting of art
thanks a lot for your creative art
i love this creative concept of drawing

thare have no dout, its creative idea of art
really a great content of drawing, i agreed
all colour combination are so marvelous
so amazing looking!

Your painting is amazing! I also pleased to read your beautiful drawing process. That's your awesome creativity, I highly appreciate it. Thank you.

masya allah ,,, very beautiful, honest I am jealous with you, the color you choose is very suitable, I like to see the painting, but have not given the ability to paint it, maybe if one day you come to our place is very that can help your inspiration for painting ,
success is always for you

Feeling feverish at all? Just asking.

your hand is a great gift in your life, your hands are able to make something that few people can make it, your work is amazing in my opinion,
only the hand of the blessed hand can do it

It's a great work. I congratulate you. The balloon is wonderful and flawless. I'm waiting for the final. @reddust

You are so amazing good. I love and admire you drawings. You are so so talent Thanks for sharing

I love that last one. Especially the Chicks in the background ; )

very creative indeed
that is looking awesome
perfectly matched ,seems like you love this work

You did a wonderful job of color coordinating you chicknasarous. The colors make it more real and alive. Thanks so much for sharing @reddust

Wow! This is incredibly too awesome..... I must commend your efforts, well done

i am very much pleased to see that art work, a simple art paper and ink pen draw the out line, then water color reaveled the beauty of chickenosaur and little girl.

this is very nice and awesome drawing with a great article...thank you sir

Not only the Chickenosaurus but the hot air balloon looks amazing.
The blue tone with clouds is super cool!!

Very cool looking ropes. Probably pretty hard to paint I would imagine. My sister paints watercolors so I sort of understand the process. Looking good! The head of the chicken looks awesome!

hopefully finishing the Chickensaurus before this coming Friday.

Wow!It's wonderful
thanks for sharing

Wow!! Its so funny how we find each other here on steem @reddust
You upvoted one of my posts earlier on, i always have a look if anyone likes my post as we normally have common interests.
I clicked on your profile and found these beautiful pictures. Absolutley astounding artwork and the colours you've used are so beautiful 😊
I have probably missed out but are these pictures illustrations for a childrens book ?

This drawing and painting of yours is fantastic with nice perspective dating back to prehistoric time. Weldon ma'am

Came online late to see the completed painting of Gallus gallus, its a painting weldon!! Am proud of your time management, (housework combined with medical researches and art its waooo.
Good job on Gallus gallus

I love both these pieces, you really have something good going with these chickens/roosters!! Every aspect of these pieces works well - the concept/story, composition, color, humor and these are well crafted as well. Excellent work! In fact, i am interested in buying the bottom one if you ever want to sell it. xo