Can We Grow A Chicken As Big As A Dinosaur? I started the day with a migraine and was able to shake it off with the help of the herb feverfew. I was going to do some detail work on my "Picking Apples" painting. Instead, I chose to work on something that takes very little concentration. This was a perfect day to avoid overthinking and let my creativity flow!

I have often daydreamed about drawing a chicken as big as a dinosaur, which science guesses chickens evolved from the same lineage as the mighty Tyrannosaurus rex. This is my light-hearted sketch of my Dinochicken T-Rex.

I think I am gong to make the Dinochicken T-rex carry some flowers and a maybe a stuffed animal...lololol 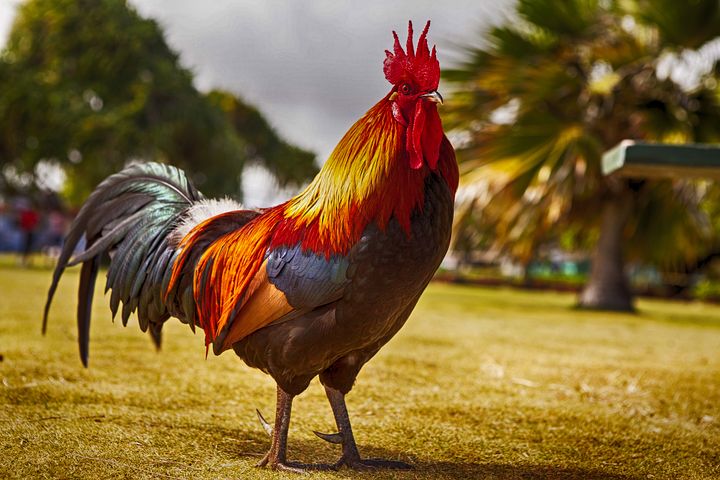 Because the world doesn't grow birds as big as a T-Rex anymore I added a balloon for extra buoyancy. I will use watercolor very lightly with pen and ink.

In the 1990s, an influx of new dinosaur fossils from China revealed a feathery surprise. Though many of these fossils lacked wings, they had a panoply of plumage, from fuzzy bristles to fully articulated quills. The discovery of these new intermediary species, which filled in the spotty fossil record, triggered a change in how paleontologists conceived of the dinosaur-to-bird transition. Feathers once thought unique to birds, must have evolved in dinosaurs long before birds developed. @reddust,
A chicken into Dino! That would be a great imagination! Hope to see another great artwork too!

I hope this one turns out, it is easier to draw and paint flowers and butterflies :p

A chickensaurus. Hmmm I would not envy the farmer who would have to face that big chicken when he got his eggs. Sounds like something they had in Bedrock with Fred and Wilma. LoL very nice artistry @reddust.

Just think about the yummy barbaque, one leg could feed everyone😜

This looks like a fun drawing.
I can't wait to see the colors you will paint the dinosaur.

Roosters, although often annoying, can have some of the most exquisite colors.

I've had roosters that were so mean I ate them and others (both I raised from incubator eggs) that were as loyal as our dogs and very friendly, which I kept of course. All the roosters I had would hunt down mice and rats and eat them! Can you imagine a chicken that is as big as a T-rex, that would be frightening...hahah

your drawings are great you're so talented, I think that's a wonderful gift. I make cakes but if I compare it with making drawings it is very easy. Drawing seems so difficult.

I can make cakes too but they are not fancy, so I give my drawings instead. Thank you @denissemata

I need to lighten up the atmosphere on my blog, the laughter is refreshing <3

this looks funny but seems interesting while a dinosaur and chicken are going to made in one shape, exceptional idea for drawing.

Actually the T-rex is supposed to be an ancestor of our domesticated chickens. I don't know if that is true, however when you look at their skeletal structure they have similarities along with the feathers both sported.

i like your new idea chicken mix with dinosaur, innovation in drawing is one of the creativity. other chicken drawing also done before and waiting for the color layer next one, best of luck.

I can't wait to figure out the feather designs!

@reddust, This looking fun drawing work. You expand your mind soul and then thought draw chickensaur. I bet final production will be amazing. Another rooster smoke one nice and made me lough. Keep going & best of luck.

The chickensaur is a great title for the drawing, several people have mentioned this and I will keep it! That rooster with the dancing chicks is taken from my favorite rooster, he was was nice to his hens and didn't attack humans. Unfortunately he died of a disease caused by commercial chicken feed. When I started feeding my chickens organic feed and let them free range no more disease or death!

Looks like something they should add in ark survival evolved. A giant chain smoking chicken that knows how to have a good time. I really love the effort y put into the patterning on its arms. I can almost feel with my eyes the texture of it.

If you have raised chickens you know the rooster rules the roost, they are burtal, this guy is actually nice, he isn't raping the hens, just watching them dance...lolol

That's the design I will use on my big chicken T-rex!

Do chickens stop growing at any time, or do they continue to grow until they die, like reptiles? If the latter, A.wyliei could just be a chicken that lived for several hundred years.

Chickens have a size limit like all birds. Science has tried growing bigger chickens like the Cornish Cross but they get heart infections and deformities in their legs because they grow so fast. Their butcher weight is reached in less then 8 weeks. I raised a few and felt so sorry for them, the Cornish Cross grows so fast it can't walk but the time it is 5 months old.

If you have noticed all land animals have a size limit, no matter what scientist do they cannot excrease a species size beyond a certain limit.

Can you imagine butchering one of these beasts? You could feed several families for a year on just the breast meat. My favorite is dark meat though and the legs are huge...now I am hungry...lolol

Lol, they could think we are grubs lol

I know what I am about say has little to with the actual topic of the post So leaving the Chicknosaur aside for the moment.
I have seen some great artwork here on steemit, but this.........this is not art. This is genius beyond compare: 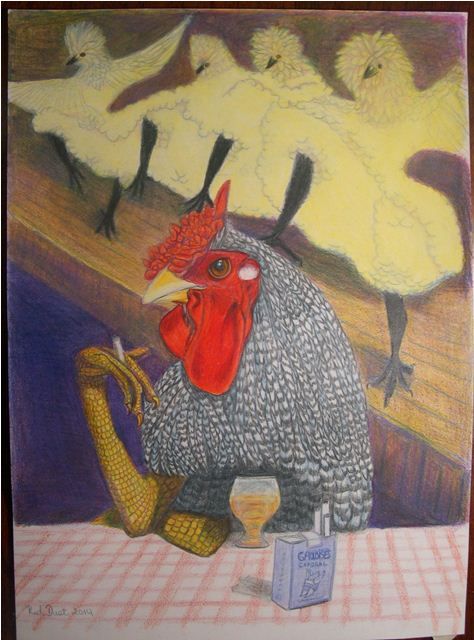 hahaha @hashcash, maybe I should post some of my old art so people can see I actually can create fantastical weird art. Right now I am trying stuff I haven't done before and it looks like poop!

I am sure it is good stuff you are probably drawing. Trust me. If you drew this gem, then the poop you'll draw would look like gold.

Disclaimer: I have no sense of recognizing good art but once in a lucky while, a genius strikes and I am there to catch the ball :-)

You made my day @hashcash, thank you (hugs)

You are very good at drawing, if I say very good I mean you are gifted in drawing.

The way you attached a balloon to the chicken to make it look big is superb.

It's a fantastic work by you @reddust

I have to figure out how to attach the balloon to the wicker basket, I think I will use a net with a cool pattern.

this art is funny drawing but beautiful art

very beautiful painting my darling @ reddust.a very nice artwork. i am very glad to see the paintings made by m @reddust. your dreams are achieved. and success is always for you

Thank you @pengenkaya, I had a nice quiet day daydreaming about gigantic chickens that sound like an elephant trumpeting when they go, Bawk-Bawk."

Amazing ur artwork , I like that ,, nice ur picture so good luck my friend @reddust 👍👍

This is an awesome art. Its really amazing photo and also creative art. I really impressed your drawing.

@reddust - Ma'm it's a new imagination... It looks like an interesting topic to make a stunning painting... Wish you all the best to draw a beautiful artwork ma'm...

@reddust, beautifull art..u r good in it, keep it up

A very wonderful article I did well, my friend You are really a successful and wonderful person

I am sure it will be very interesting, the one from 2014 is very detail. He is thinking so hard, or may be he is very exhausted from something, I look at the eyes. thank you @reddust

And this is one of the most hilarious representations of art I've vome across here..... I bet that chicken is feeling so blessed right away; hahaha........This is awesome, can't wait to see you apply to the colours