Golem (GNT) continues to correct after having put in a near vertical rise out of the double Cup & Handle pattern. Vertical at it might have been, five waves are counted and thus was impulsive. Elliott Waves states that after five waves, there is a requisite retracement. This correction could be counted as a simple abc three wave or a Flat; however, the correction is displaying a pattern. Closer examination shows a downward pointing symmetrical triangle where price is near the apex (the point at which the lines of the triangle intersect). Does this mean a breakout can be expected? Likely, yes; however, post breakout, price has all the freedom to do a sieways action to regroup. IF the lower white line is breached as support; the a retrace to prior wave 2 can be probable; however, given that the wave 5 was not extended; this level remains a far alternate. 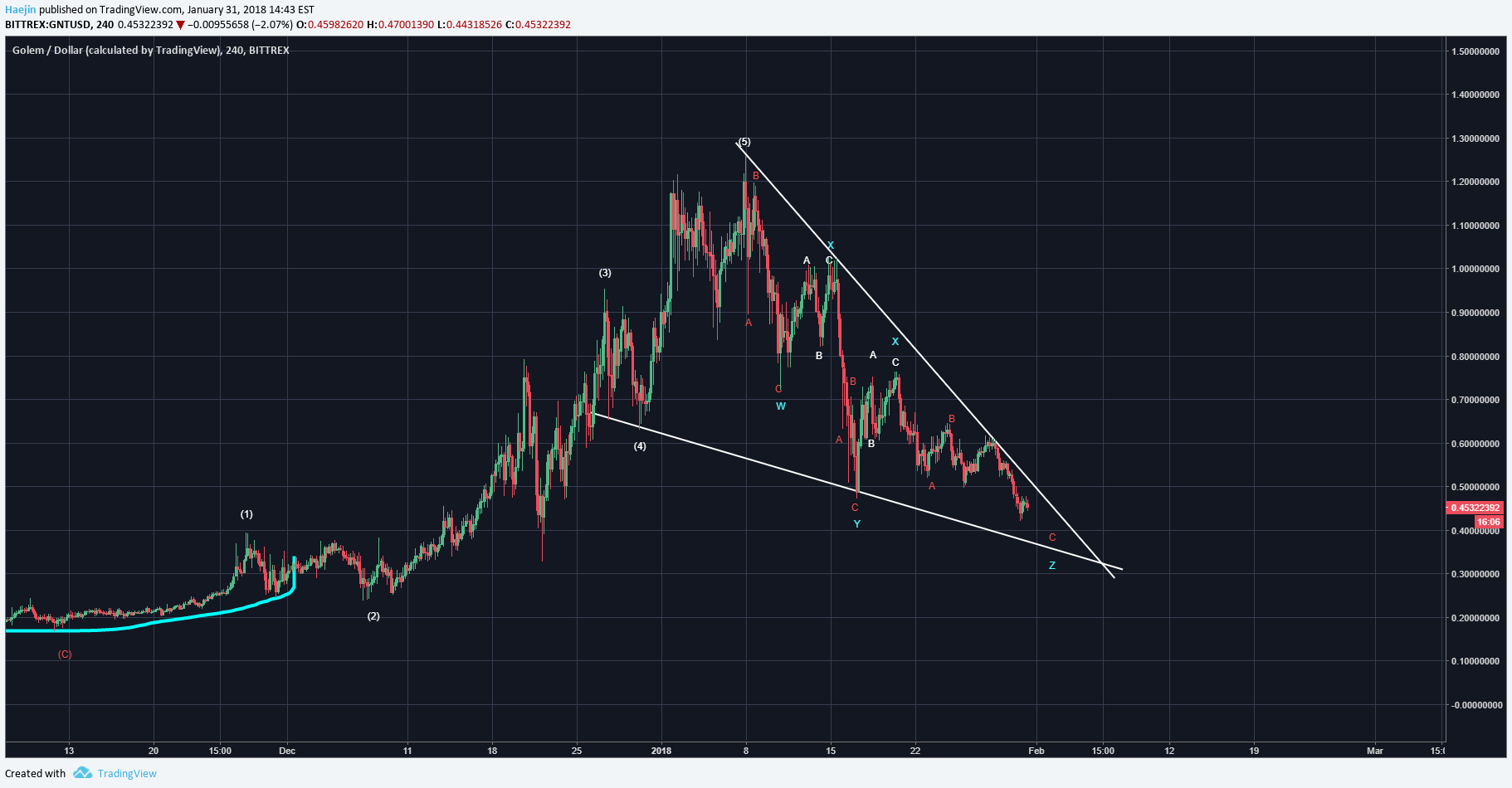 Improve your trading profits with this: https://steemit.com/bitcoin/@investingtips/which-trading-order-should-you-choose-all-the-different-types-explained

Promising project but they are late with delivery of promises. In crypto everything is developing so fast that I think they will be late to the party. Hope I am wrong...

excellent as always thanks for always keeping us updated. a thousand blessings for you

Keep up the good work haejin

I aim to advertise all the players in crypto industry under one roof, with a gorgeous grid based retro landing pad. Providing links to all that the crypto industry has to offer and to promote and showcase the community. You will be seen by a large crypto and blockchain audience.

Thank-you For Sharing You're Work! Maybe Something Bullish Might Happen After It Tests Low? Cheers!

I am expecting a big rise may be after testing the lower support. Great share

The pattern is a bullish symmetrical.

It looks like all the coins started at the same time bullish and they all going in correction together with bitcoin. I see that bitcoin will fall till 5500 dollar and all the coins are falling to. ripple, verge bts and all the other coins went togeter up at jun 2017 and they went in correction till nov. in december they all went up together and it seems like they will go all together down for 6 month again. they are 2 times bullish for every time 1 month.
I have learned a lot from you. through you I have learned from ellioth waves and patterns. what has happened in the past in
July is now happening the same. I have learned from you that there are 5 subwaves that form a wave together. 5 big waves are over. 5th big wave of bitcoin is also over. they all will go down 50% more. it's time to take my money away and june back in. by waiting for the 3rd wave of the altcoins I have lost a lot of money. losing 50% now would be even worse. the big fall of the 5the wave will bring more pain for people that holding alt or bitcoin.
I am very dear to you and have learned a lot from you. I hope you see that there is no more bullish up to several months

I appreciate your planned actions. Me, I plan on taking my 15% in cash and laddering in more at the posted landing zones.

Great post. I recently acquired some GNT. I love that they have a beta product to show their use-case!

The MACD is oversold and sellers are finite. That means bottom is not far away.

This is informative. Golem GNT looks like a keeper and the numbers don't lie.

Seen a few of your work on Twitter. Love it @haejin

Interesting... very interesting, gonna research if they have a promising project

great post I've been Holding GNT since it was 0.09