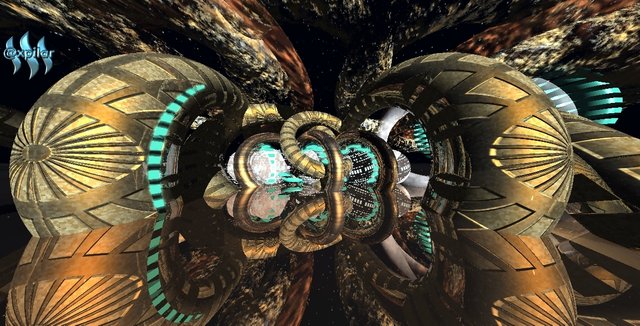 In the middle of a slightly crowded sector of the galaxy, in Orion's arm, less than six light-years from the very center of the human-occupied region, in a strange rock detached from the gravity of other bodies, lies one of the major unknowns found by humans as they expand across the galaxy.

A vestige coming from some strange culture, disappeared perhaps millions of years ago, one of the clues that have been found of it. The mechanism of Phidias is a strange machinery, whose purpose is completely unknown, there is no trace in it of any kind of energy, radiation or particle that can give a clue of its use.

Several theories about its purpose have been developed, its structure resembles that of nanomachine generators, but its location, in an asteroid isolated from any source of raw material to generate them, makes this doubtful. However, the complementary theory has been proposed, that it would be able to feed on WIMP, the elusive particle whose existence was confirmed during the first years of operation of Uroboros, and which is responsible for dark matter.

If this were true, it would be one of the greatest aspirations of humanity, the possibility of creating matter from nothing, or almost from nothing, which would make possible the development of bridges in the galactic halo where dark matter abounds and interstellar matter is scarce.

However, this is only speculation; for, together with the strange network of subterranean structures of Balder and the temple of Susanoo, the mechanism of Phidias is only one more unknown, left by the mysterious civilization that once populated the galaxy and whose vestiges have mostly disappeared.