The Depths of Balder 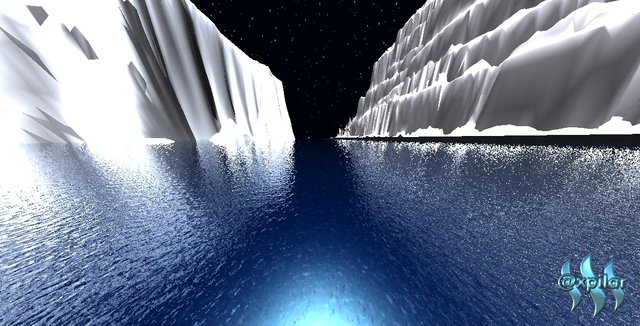 The Depths of Balder

IRWIN's shimmering metallic body emerged in the middle of the channel, several kilometers before the entrance of the Balder polar research station. Overflying the area was forbidden for any vehicle that was not part of the research being conducted there.

Although he could have flown and reached his destination more quickly, he would not have done so, he enjoyed doing this tour over the still waters of the canal, he felt a strange sensation of calm in the middle of the steep ice walls, The uninhabited seas of this world were very different from those of Heracles, where he had been stationed before.

Balder's seas lacked any form of macroscopic life, his terraforming had been stopped for reasons still publicly unknown, only a few people on the Environmental Engineering Division's steering committee and Parliament's safety board knew the reason. Only thirty people worked on the project, of which twenty-five were scientific personnel and the remaining five, operating and maintenance technicians, all operational tasks were carried out by robots, including the delivery of supplies and the transport of personnel, when required, was done by autonomous vehicles.

IRWIN was an autonomous underwater prospecting probe, designed and developed in Heracles, where for several decades he worked on the excavations for the construction of the bay of Canopo, one of the coastal cities of that world, whose surface is mostly located on gigantic pillars, planted on the seabed.

He was in charge of the seismic sounding and neutrino emission of the seabed, for the mapping in three dimensions, up to fifteen kilometers deep. Weekly it was required from the research facility located on the surface of the ice cap, to scan the bottom under it. Apparently there was something under the seabed that was of great interest to Parliament.

During the last three months I had probed four hundred square kilometres with the same result all the time, absolutely nothing that seemed abnormal, different layers of rock of different densities and hardnesses, but nothing out of the ordinary.

When he reached the end of the channel he received the authorization signal and the coordinates that he should explore, he submerged under the ice cap and began his work, he began to emit the has of neutrinos and to observe its interaction with the rock, then he could notice that in the stratum of the three thousand two hundred meters a strange structure was observed, that did not seem nature, it was a species of network of tunnels excavated in the rock, the network extended by all the area that he was exploring seemed to occupy all the sector of the grid.

How had he not seen that strange subterranean construction before, if it seemed to extend to sectors that he had already explored on other occasions. It was a kind of mega structure, formed by galleries and tunnels that interconnected them and seemed to go from three thousand to nine thousand meters deep, its volume was colossal.

After completing the sounding, he ascended to the installation as always towards it, his long torpedo-shaped body was lifted from the water by a magnetic levitation platform and taken to the hangar to retrieve the records he had made, curiosity invaded him, what was left in the images he had taken?

-Hello Doctor Gerald, it seems that now I have found something - said IRWIN, full of emotion, to Gerald Petersen, the specialist who regularly retrieved the records.

-Excellent IRWIN, let's see what you found this time, -replied Gerald in an affable tone, connected his personal interface to IRWIN and after a few minutes of waiting, smiled a big smile as he watched the projection of the tunnel network images found by IRWIN.

-What do you think, doctor? It's interesting, indeed, -said IRWIN cheerfully.

-No doubt IRWIN images are excellent, as you have always done a great job, -he said, while disconnecting the interface -. Wait here a moment, the maintenance robot will come to prepare everything for your return.

-Thank you doctor, I hope you will soon be able to tell me what we found, -continued IRWIN.

-Of course, when we examine them in detail we'll know what's in them, -said Gerald walking away, while a small robot moved by magnetic levitation was approaching. Gerald bowed to the small machine, not more than thirty centimetres high, levitating about forty centimetres from the ground. Erase the records of the exploration and of his memory and replace them with the usual information, moderately altering our conversation as is done regularly.

Gerald walked away, leaving IRWIN in the hands of the maintenance robot, went to the laboratory, to analyze the new images of the gigantic structure that seemed to extend throughout the crust of the planet, they did not even know exactly what it was, they only knew that it was not natural and must have at least eight billion years buried there, and that it had to go back to the formation of the planet itself, many researchers agreed that Balder had not formed naturally, was the product of some unknown intelligence.