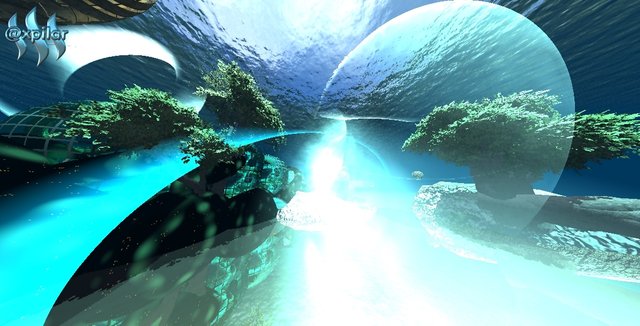 The ocean of Anfitrite, was unusually clear, it was the first time that Pietro had such a clear vision of his surroundings, while swimming with an underwater suit, he was able to distinguish at a great distance the peculiar formations of corals, from the reefs that less than two years ago had been sown in this peculiar ocean.

He observed the readings of the mixture of oxygen and nitrogen that were projected on the visor of his hull and noticed that he still had about two hours to continue exploring, so he changed the impulse parameters of his propellers and increased their speed.

The coral had almost colonized all the artificial structures that had been placed there for that purpose, hives of a synthetic resin that served as an anchorage for these peculiar marine animals.

Other habitual inhabitants of these ecosystems had also adapted well to their new home, shrimp, mollusks, anemones and a variety of colorful fish walked comfortably among the coral formations.

This new ecosystem, adapted to the configuration it could have had on Earth, contrasted with the peculiarity of this beautiful ocean, of low salinity and depth and with a background formed mainly by pink rubies, which added a particular beauty to the whole scenario.

After an hour and a half of travel, Pietro again accelerated his propellers to return to the submersible, and it was time to restock his suit and head for another reef located further north of the coast of the continent.

Soon Anfitrite would be a world ready for colonization, only a few would be fortunate, it was a world with scarce land emerged by what had been planned only three cities. Perhaps in a hundred or two hundred years Anfitrite would already be a totally suitable world and with an autonomous population, although small.