Destroying the Crazy - The Series That Got Me Banned From YouTube

At this point the narcissist, Harley Johnstone, had sent my girlfriend and I death threats, he had contacted our families and friends, tried to blackmail us and made countless public videos, posts and comments to harass and defame us. It's clear that he didn't like being exposed and was desperate to make me stop.

Believe it or not, even after everything that had been revealed through my videos, there were still people who continued to support him. Toni Jessop, an individual who is in my opinion too old to go under the name 'Vegan Girl' wanted to make it out that I was the problem in this situation. That's the thing when you go up against narcissists, you don't only have to deal with the narcissist, you have to deal with their flying monkeys too.

“Flying monkeys is a phrase used in popular psychology mainly in the context of narcissistic abuse. They are people who act on behalf of a narcissist to a third party, usually for an abusive purpose.”

How to best deal with these morons? Further expose what a vile creature Harley Johnstone is of course! 😉 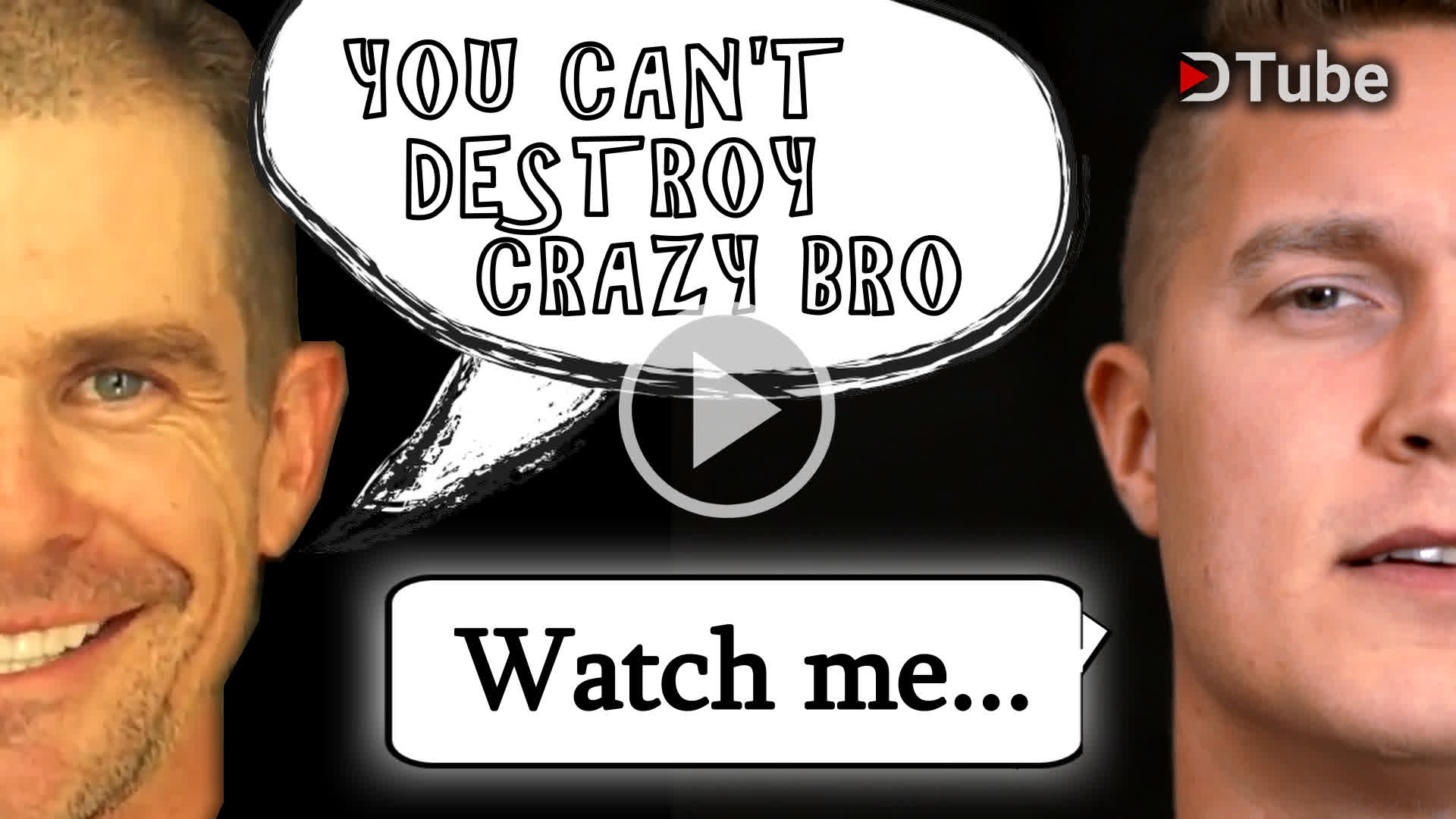 As you can see in the video I stopped using his name, Harley Johnstone, and instead started to call him 'The Narc'. This way he couldn't cry to YouTube about privacy / harassment / bullying anymore. Originally his face was blurred too and any text with his name/alias was covered with *The Narc. Now that I don't have to deal with YouTube's hypocrisy anymore, the uncensored versions are going back up 😉

How did Vegan 'Girl' respond to me shutting down her critique? By making up lies about how I supposedly kept messaging her and was keen. These people are so full of themselves, I haven't sent that nasty piece of work one single message ever.

These are the kinds of people we're dealing with. They want to be able to criticize you, but if you don't let them get away with their BS, they respond by making up lies about you. 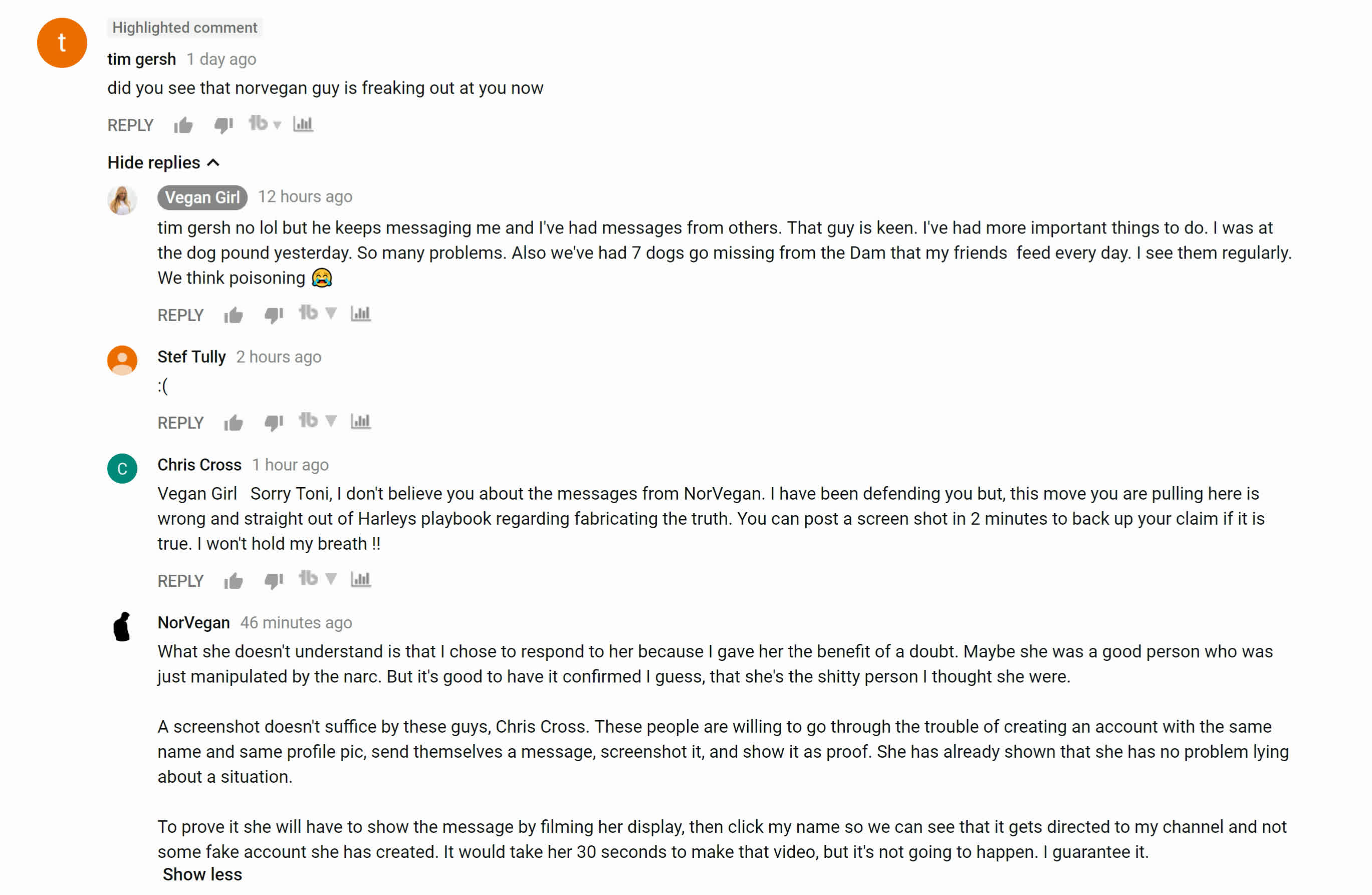 “These people are willing to go through the trouble of creating an account with the same name and same profile pic, send themselves a message, screenshot it, and show it as proof. She has already shown that she has no problem lying about a situation.

To prove it she will have to show the message by filming her display, then click my name so we can see that it gets directed to my channel and not some fake account she has created. It would take her 30 seconds to make that video, but it's not going to happen. I guarantee it.”

Needless to say, no evidence of these supposed messages was put forward.

It's also possible to watch the video through spee.ch:
https://spee.ch/destroyingthecrazy

Question about his flying monkeys: do you think they are just as bad as him or just under his influence? I ask that because one of them ( the French one, Pauline) I use to follow her back in time, before she enters in the “rt4 cult” , she was so nice, very shine ( she wasn’t wearing sexy top and making troll/ attack videos) She also used to eat very clean but after starting follow him, she became a different person. Even freelee looks more nice now than she was when he was close to her

They can be as bad, or they can be genuinely good people.

According to Atkinson, flying monkeys are usually unwittingly manipulated people who believe the smears about the victim although they may be another narcissist working in tandem.[2]

According to Vaknin, proxy abusers can be:[4]

I used to be a flying monkey and I’m a wonderful person but I had low self esteem. I’m extremely shameful for going along with the false narrative they put out. There were times I knew what they were saying was wrong but didn’t want to believe it. I say They because it was 2 Narcissists that I was a flying monkey for. I just hope everyone wakes up to their manipulative ways and after Michael puts out Part 5, I hope Harley is never talked about again and he only has the voices in his head to keep him company.

These people are extremely manipulative. As a former prison officer I've had inmates that seem like the nicest person, but have done the most horrendous things. I know the feeling of wanting to believe them because they can be very convincing. Harley isn't even close as good of a manipulator as some of the people I've interacted with through my job, it's quite scary really.

Michael I am so happy you’re able to post all these in a secure place! Proud of you!!

I think it also depends on the personal background one specific flying monkey has/had, eg when someone grew up in an abusive surrounding being either a victim to the abuser or abused as a flying monkey from a very early age on, I think this person is often prone to fall prey to an abusive person later on in life, again, being either victimized directly or "indirectly" by being abused as a flying monkey.
Also I'd say it matters how close the relation(ship) between the abuser and the flying monkey was. I bet there are different "grades"/"level" of flying monkeys, but this is just a thought of mine, haven't read up on that yet.....bet Richard Grannon or Sam Vaknin have already explained that in some of their highly informative videos.