THE UNMASKING, Part 3: The Projections - The Series That Got Me Banned From YouTube

Here's the third installment of THE UNMASKING, the series that got me banned from YouTube. As you know from part 1 and part 2, this is the series where I expose raging narcissist, Harley Johnstone.

In this episode I disclose how he projects his own behavior and actions onto others. For many years he has gone above and beyond to "expose" sexual predators in order to "protect" what he describes as young vulnerable women in the vegan community. But as revealed in this episode, he is the sexual predator who targets young women! 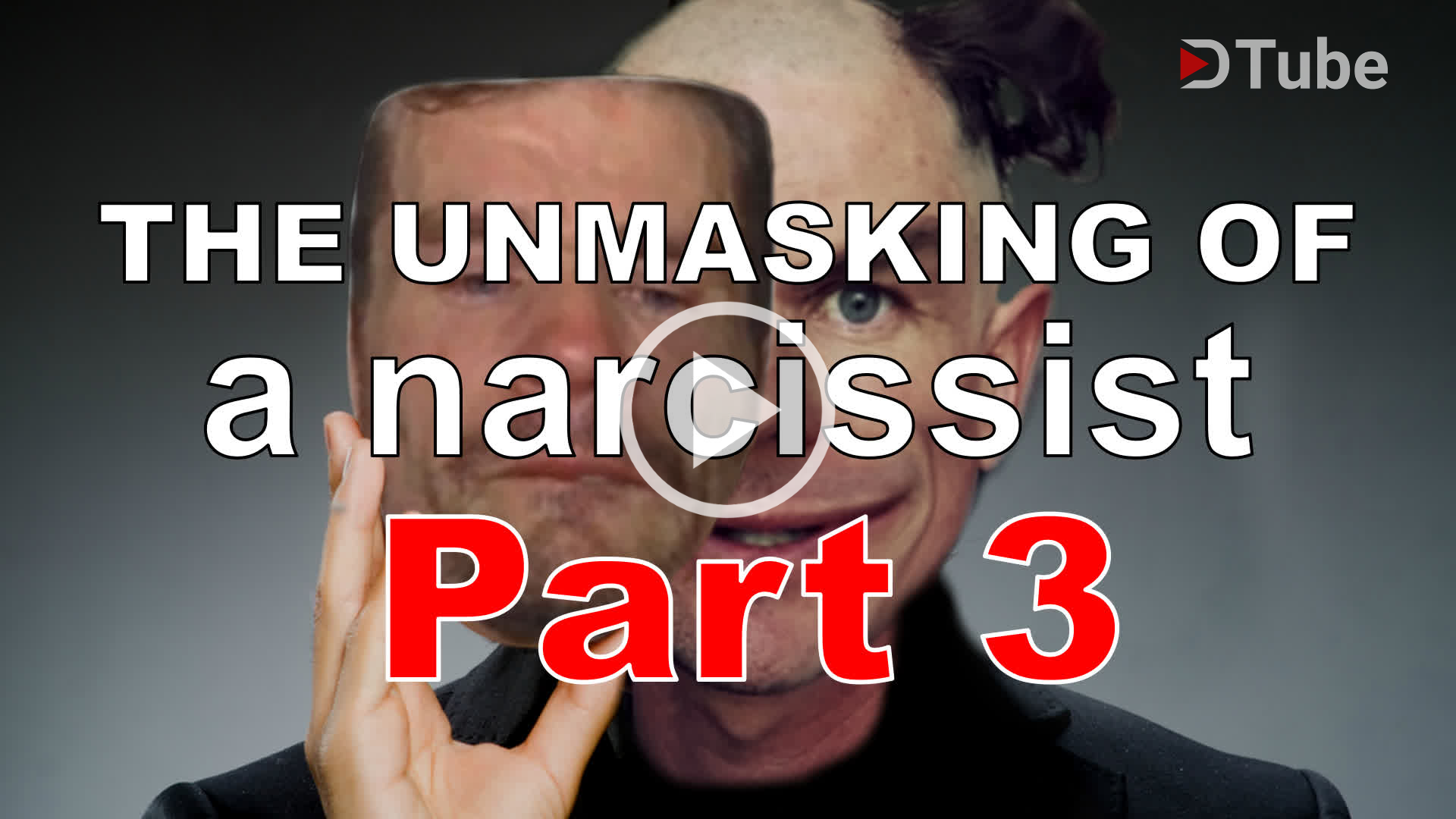 What's particularly disturbing is how detailed his accusations are. As I said in the beginning of the episode: if you want to know what Harley is guilty of, you can just look at what he's accusing others of. The only person who has had multiple girls coming forward about him in the vegan community on YouTube, is Harley Johnstone.

As with part 1 and part 2, YouTube once again helped this criminal to take down the evidence against him. 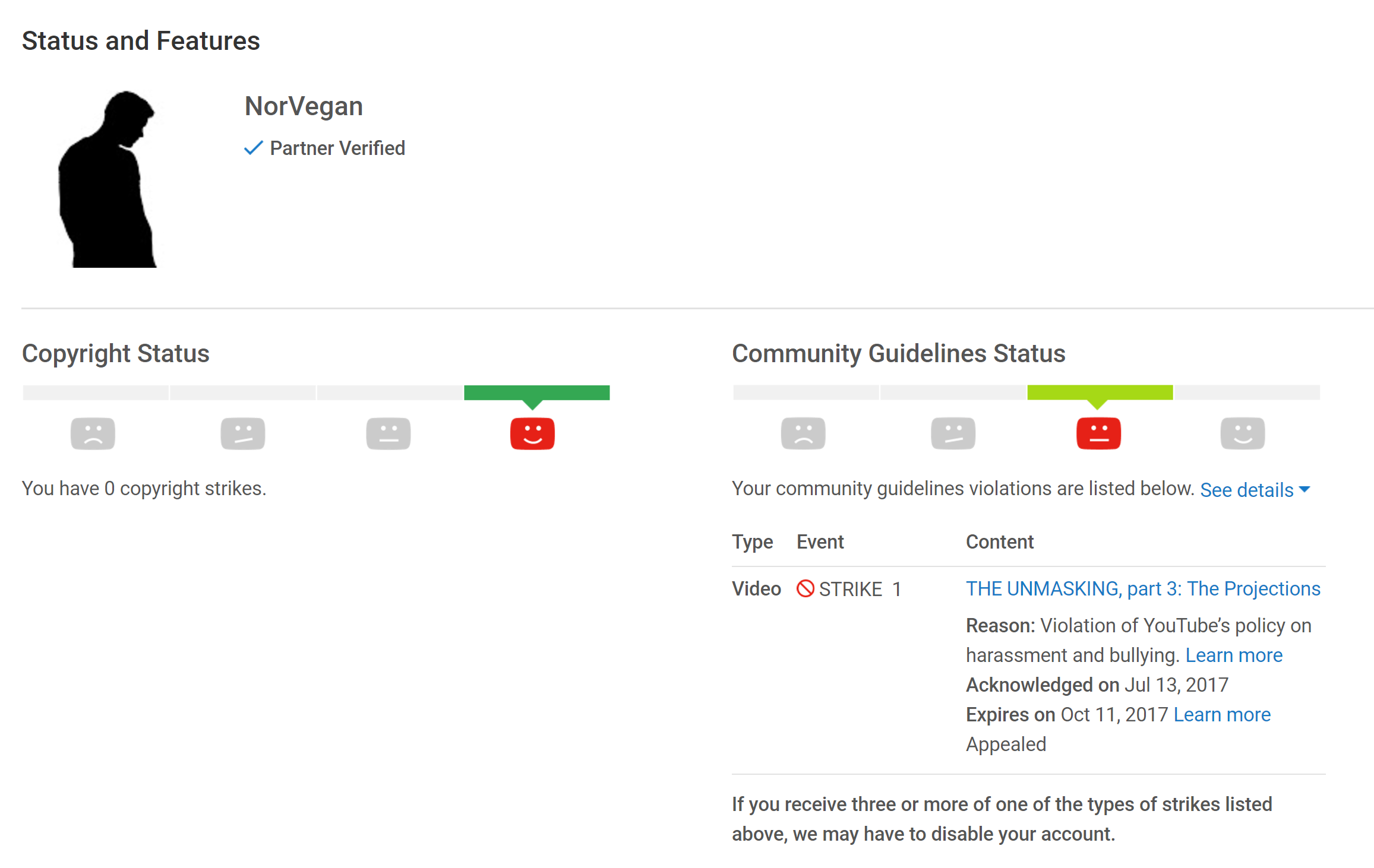 Further in YouTube's community guidelines they have this listed: Things like predatory behavior, stalking, threats, harassment, intimidation, invading privacy, revealing other people's personal information, and inciting others to commit violent acts or to violate the Terms of Use are taken very seriously.

Harley is guilty of all of these actions, and I've proven it through my videos! Anyone caught doing these things may be permanently banned from YouTube.

Well, YouTube didn't ban the person guilty of all of this, they banned the person who brought forward the evidence of it.

So to summarize:
It's okay for some YouTube-channels to severely violate YouTube's community guidelines and ToS, but it's not okay for other channels to expose it.

We'll see how that works out for them in the long run!

It's also possible to watch the video through spee.ch:
https://spee.ch/theunmasking-part3-theprojections

Á-bas-le-ciel's complaint in the beginning of the video now becomes the Narc's complaint too:

"For the rest of my life I am gonna have to cope with the fact that my employers can put my name into Google and see it attached to pedophile, wife beater, sexual predator.. numerous others."

But worse future employers can even watch a free 5 part in-depth series on the applicant. Karma.

Especially in australian headlines for his ridiculous shit and comments. He doesn't even have a positive image in the media including with the kayla itsines lawsuit, the domestic violence victim he victim blames and especially his verbal diahorrea towards a driver on a current affair(a news program).
Here are some article links:
https://www.google.com.au/amp/s/amp.smh.com.au/lifestyle/news-and-views/opinion/when-is-being-vegan-no-longer-about-ethical-living-20151216-glp44t.html

https://www.google.com.au/amp/s/amp.smh.com.au/lifestyle/news-and-views/opinion/why-are-police-still-ignoring-alleged-victims-of-domestic-violence-20151215-glocxq.html
I doubt he will have a job outside youtube let alone get an interview with an employer as he is an erractic but dangerous narcissist who will manipulate everybody and everything around him. No one is immune to his rage, including those who remotely dislike him or followed him. Plus he has no legitimate education whatsoever or exprience which will be of personal detriment to him and at least he has no children if his own so that they don't have a toxic parent to live with.

Once all the videos are re-uploaded and the final part made, I'll make a post where everything is neatly compiled together under one clickable link. I'll make sure to title it in a way that will catch any potential future employer's eye too. Something like:
Harley Johnstone, a scammer, a fraud and a sexual predator.

Or something along those lines.
Complete with a table of content and everything 😎

Nobody will have to waste any more time on defending themselves against his lies anymore, they can just respond with the link 😉

Without adding commentary you could also feature short clips of him on youtube demonstrating his behaviour. Him assaulting Sam in Thailand, going in a rage against a driver that overtook him safely, insulting his own girlfriend, attacking victims of horrible circumstances. They all speak volumes by themselves. I think having those moments readily available and prominently displayed on youtube would be good. Its pretty strange watching him talk about effective activism and being calm. When there are so many moments he has been psychotic and aggressive.

All of that can be uploaded in a way that can never be contested for copyright, privacy or attacking him. Since they are just videos of him being himself.

He is just exposing himself and blaming it on others, especially freelee when his channel was taken down.
Like wtf? Freelee had nothing to do with it as now she is a better relationship and is trying to make content away from attacking other youtubers. She isn't innocent either but at least it speaks miles about her doing at least some decent content and not being harley.
Durianrider on the other has fallen from grace wirh little respect from the majority of the vegan community besides his own cult.
No one will ever take him seriously now he is just a narcissistic a**hole.

Good idea. Anyone can do that though. I'm pretty happy to move on with my life once everything is put together.

I post a little preview for each video on Hannah's channel that I've re-branded to look like my banned one. Just so the videos are still searchable on YouTube.

Just an idea. Could that radical behaviour not be a point of interest in the trailers, or be a trailer itself? Its an immediate example of how deranged he is and then the whole narcissism disorder can be explored in full in the steemit videos.

You are right that anyone can do that too. Would be good to upload that footage with a similar heading like ' Durianriders " " incident'. All linking to Dtube/Steemit Unmasking Series.

Could be a little series on its own:

So this is the Dtube/Steemit brave new world? Nice.

It's not perfect, but it's way better than the status quo 👍

I'm still getting my head around it but am encouraged enough that I might even start posting some content on topics that interest me. The motivation to do so on this new medium is far greater than the 'other place'. Who knows.
Looking forward to you ending the saga in Part 5. Is it far away?
He's not worth the time or effort but I understand the reason for your resolve. In the end, living well is the best revenge. And not having to live in his skin is a big plus too.