Last night, it was amusing to see many panic so quickly from Bitcoin's $400 air pocket drop. With more experience and ability to proficiently identify primary and alternate price pathways, one learns to depart away from reactionary emotions. The video analyis addresses this much more in detail.

The below chart represents my primary count for higher highs. I've updated the Elliott Waves to reflect last night's decline to be wave 4 and so now, wave 5 of circled blue five of white iii should take place. The top alternate count is a relabel of Elliott Waves showing the white wave v is in and so an abc correction would ensue towards the level of prior wave iv or around $7,400. 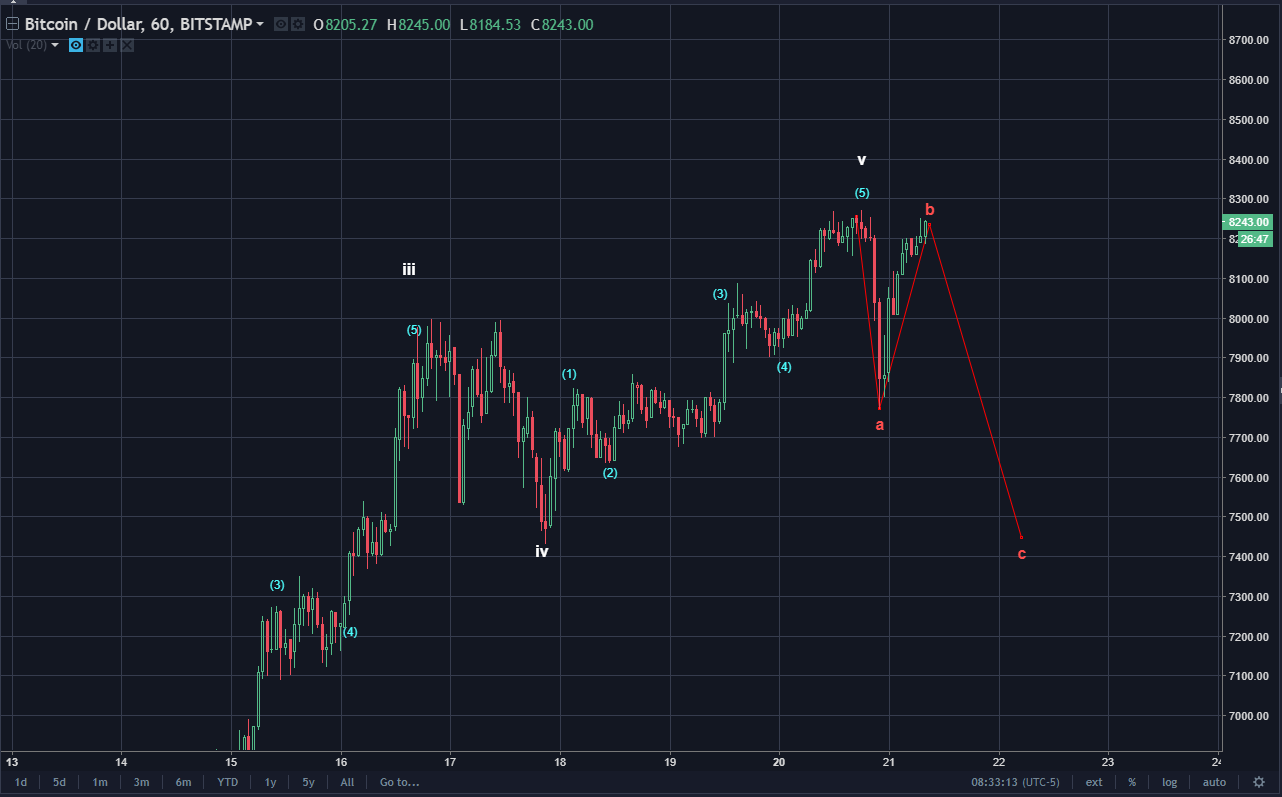 The next alternate count is for an expanded flat a,b,c correction as shown. Wave b would carry price to a higher high but wave c would decline well below red wave a. The chart for Bitcoin Cash (BCH) has also been updated. I strongly recommend you view the video on this as another of @haejin's secret sauce component is released. I believe the symmetrical triangle is near complete and price can be expected to surge out and up as shown. 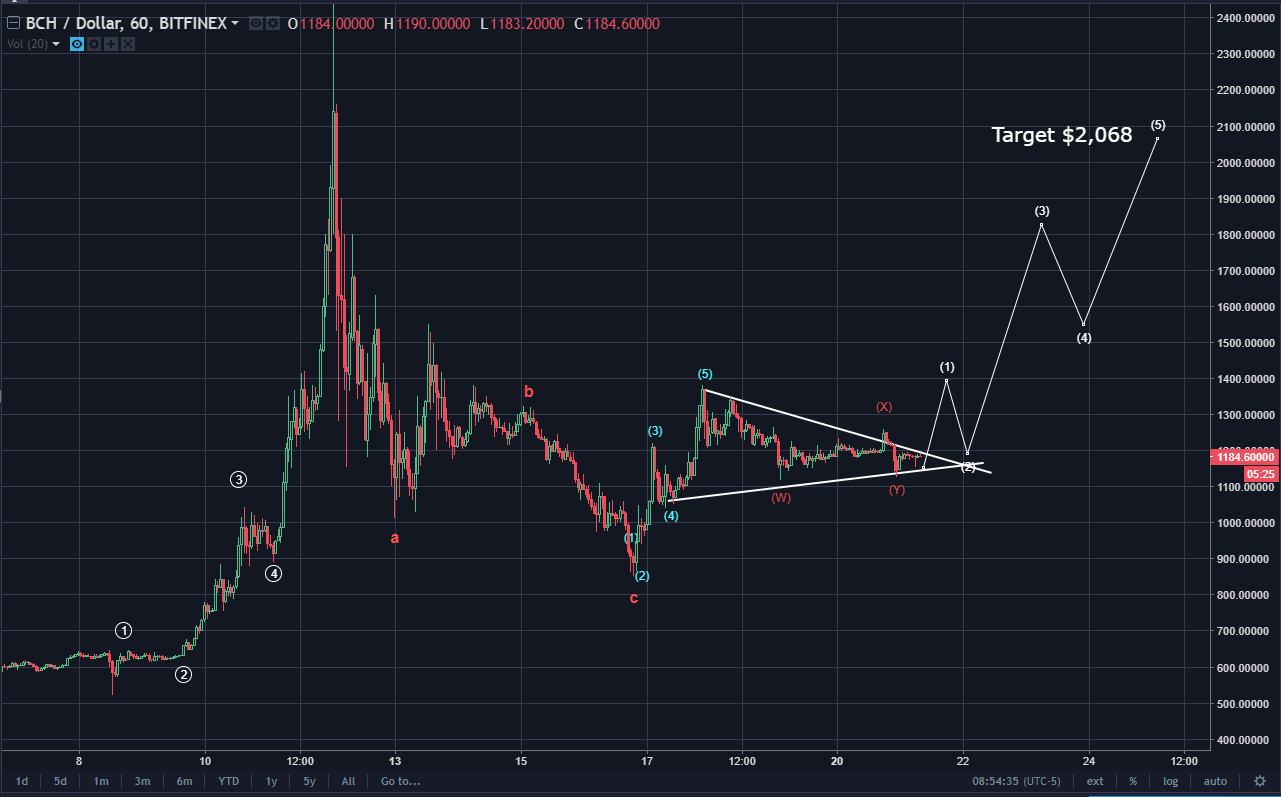 Here is the link on the Essay: Dangers of Herding. It would be a good read for all.

Not sure why Youtube is again causing view issues. I'm hoping this video will come through as it contains lots of gems.

Legal Mumbo Jumbo: This is only my opinion, make of it what you wish. What does this mean? It means it's not advice nor recommendation to either buy or sell anything! It's only meant for use as informative or entertainment purposes.**
#money #cryptocurrency #blockchain #altcoins
3 years ago in #bitcoin by haejin (86)
$17.88
149 votes
Reply 32
Sort:
[-]
knircky (73) 3 years ago

So basically if we go below 7800this would look very bearish?

No, then correction would be about done.

Hey - in Your previous post, I made my first try with charting with XVG-BTC. It's based on Your count, but updated with recent price actions. I'd love to hear Your oppinion. Cheers.

Great information as always Haejin. I am amazed by your accuracy and have turned my nephew on to your posts as well. He owns Iota, Neo, Eth, LTC, OMG and BTC and is doing very well for himself but now with your expert TA hopefully will do even better.

Haejin please if you could do a new okcash? I currently am holding trying to decide whether or not to get out and buy something else. Do yiu see any short term spikes coming? Blessings!!

not the best time to trade BTC I guess. I'm waiting for a nice breakout pattern so I can buy/sell with confidence.

i hope when wave C correction begins, altcoins will start to pump.

Could you do an update on ZEN and also XZC

🔜🐾🐈❤️Thank you, I am in the process of getting my external bank verified. (1) how long does it takes (2) should I transfer my coins from Kraken to hopenledger for more safety?

Hi @haejin. I was following the graphs yesterday and the decline was due to Tether hacking where was stolen about 30M USD. I don't know how it will impact.

News or events shall arrive to justify the forecast.

Thank you Haejin!
What do you think of xvg? It went true some support lines...i know, i will not let sentiment take over haha but does it make the pathway for verge very different now? Thank you, Haejin. I relish the secret sauce.

My wish is to die poor of secrets!

I'd like to see an update of DASH if you have time.

BTS now on Binance exchange....probably why it cost me more to buy some more this morning...

Which Cryptocoin Could Overthrow Bitcoin? 哪种密码货币可以颠覆比特币https://steemit.com/bitcoin/@kimchi-king/3dngte-which-cryptocoin-could-overthrow-bitcoin

Required reading , and it's BTS.

Wow, Haejin, I just discovered you and your patient and brilliant TA on Steem, youtube and Twitter. I find it interesting how the loudest guy in the room tends to lead the herd, meanwhile people like you humbly chill on your mountaintop offering HUGE value to us all. Thank you sir, I appreciate you!

In the first picture, your white 4 (bottom) overlaps the head of 1.

Isn't that a rule?

Thank you for everything, you are great!

IN the case of bcash. WOuld you consider it to be in limbo becuase of buyers that bought the top are now sellers looking for some sort of relief awaiting sells to get filled at important areas of resistance? If so can this effect the wave count. I believe many fomo buyers are waiting to sell off and we may not see those highs???

You're trying to extrapolate cause and effect at level of fundamentals.
They matter none.

Only the price action which is upstream of the news/events/people actions.

Haejin, can you help me understand correctly the impact, if any, of price manipulation, washing, naked shorts, etc on elliot wave trading?

None.
All that happen has already happened, time is only viewing it linearly.

Einstein said that time is an illusion and all possibilities happened at once in an instant. For Elliott Waves, all events, news, persons, manipulations, shorts, etc appear onto the stage at the right moment, play their parts and exit the stage.

My answer can only be abstract.

Check out my post to see how to make free Bitcoin
https://steemit.com/bitcoin/@karanjain/how-to-earn-bitcoin-or-litecoin-or-dogecoin-or-for-free-without-mining
We will co-operate with each other...... I upvote your all post and following you.... Don't forget to upvote my post and also follow me..... ☺️☺️☺️.....