This post will go longer term to short term analysis, the reverse of the usual for Bitcoin (BTC). Overnight prices have treked lower and it is reflecting on the MACD where the 12 day white line has curled downward and is sitting ont he 26 day red line. Will it be the end of the world if the white crosses the red down? In a word, no. The next charts can give the reasons as to why. The blue D wave is likely still in progress. The subwaves as shown as red ABC. The subwaves of wave B is shown as white abc. Price is probably working on the white c wave. The next chart dissects this a bit further. 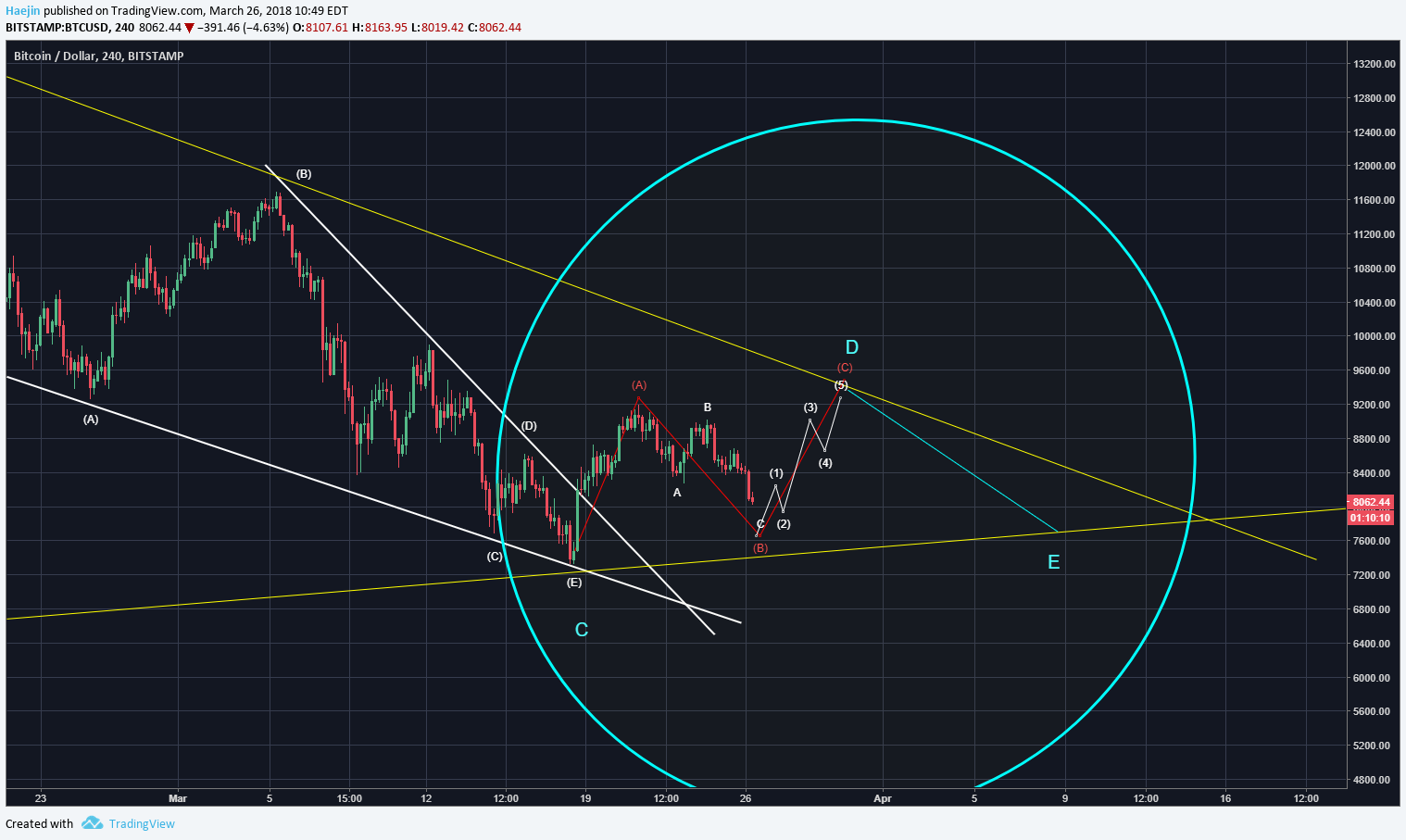 The closeup of the subwaves of blue D shows that red ABC. The red A has five subwaves which makes the red ABC sequence a ZigZag (5,3,5). The red B wave is subdivided into white (A), (B), (C). White (C) has five subwaves as shown by the blue five waves and thus far, 3 is in process of completing and 4,5 are likely next. Blue wave 5 is targeted for the 0.78 Fibonacci level. The white (A), (B), (C) will probably pattern out a downward wedge as shown by the yellow lines. Once red B is complete, red C will initiate with a sizable impulse wave upward to complete blue D. 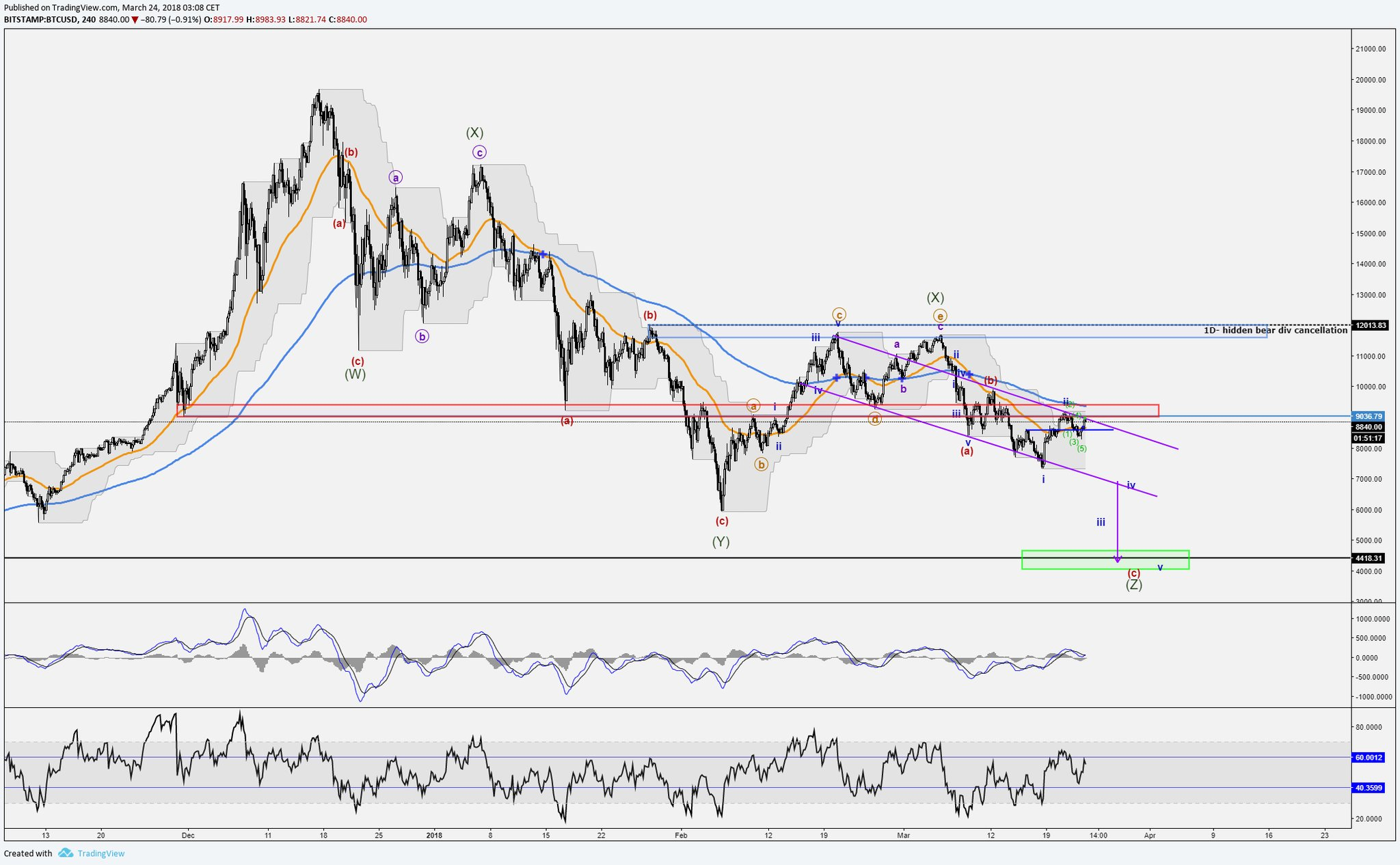 It's very possible, great buying opportunity is at the $6k level.

why would you buy at 6k if 4k or 5k is very possible? lol makes no sense

Price at $6k meets my trading rules. Once I'm in any trade, I can't control the outcome. In this case, if I go long at $6k, it's possibly I will get stopped out and price goes down to $4k/$5k. Trading is a probability game...I'm just looking for low risk, high reward opportunities. Does this make sense?

You said 4k/5k is "very" possible, how is entering at 6k a low risk trade then when you think it very well could go much lower? Trying to catch a falling knife is never low risk.

We are retail investors, but have to thinking like the Big Boys. The Big Boys buy low and sell high. The retail investors sell low (falling knife) and buy high (FOMO). I agree with you on the falling knife, so I usually look for conviction. I read price action to ensure price wants to move higher. So for example, this is the pattern I'm looking for to go long within a buy zone:

where I'm looking for lower highs to form, than I'm buying a pull back where there are buy orders within a lower time frame...15 or 5 min chart. I call these confirmation entries. Most importantly, I use stops, so if price hits my stops, I just move on to the next set-up.

Does this make sense?

Can there be abcde between (Y) and (X)? I have been wondering that.

Maybe it could be an ABC with a truncated C: 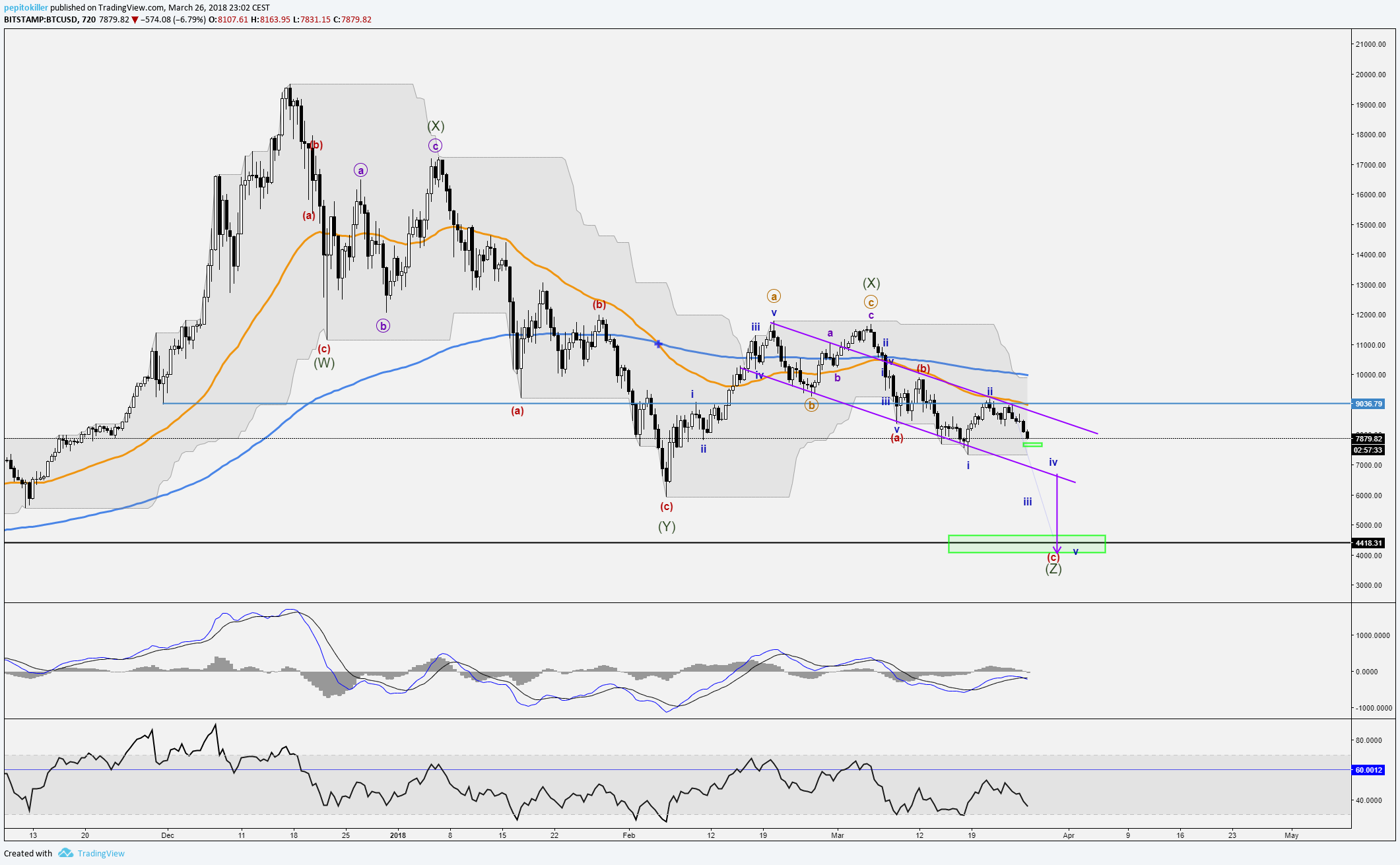 I was thinking it was B followed by S, truncated by a touch of stench

By end of April what can we expect ??

Dates are very difficult to estimate... but there's the possibility that it happens within a few weeks

Interesting... What do you think about this analysis? I think you are going to be looking at alot of sideways nothing fro crypto in 2018... 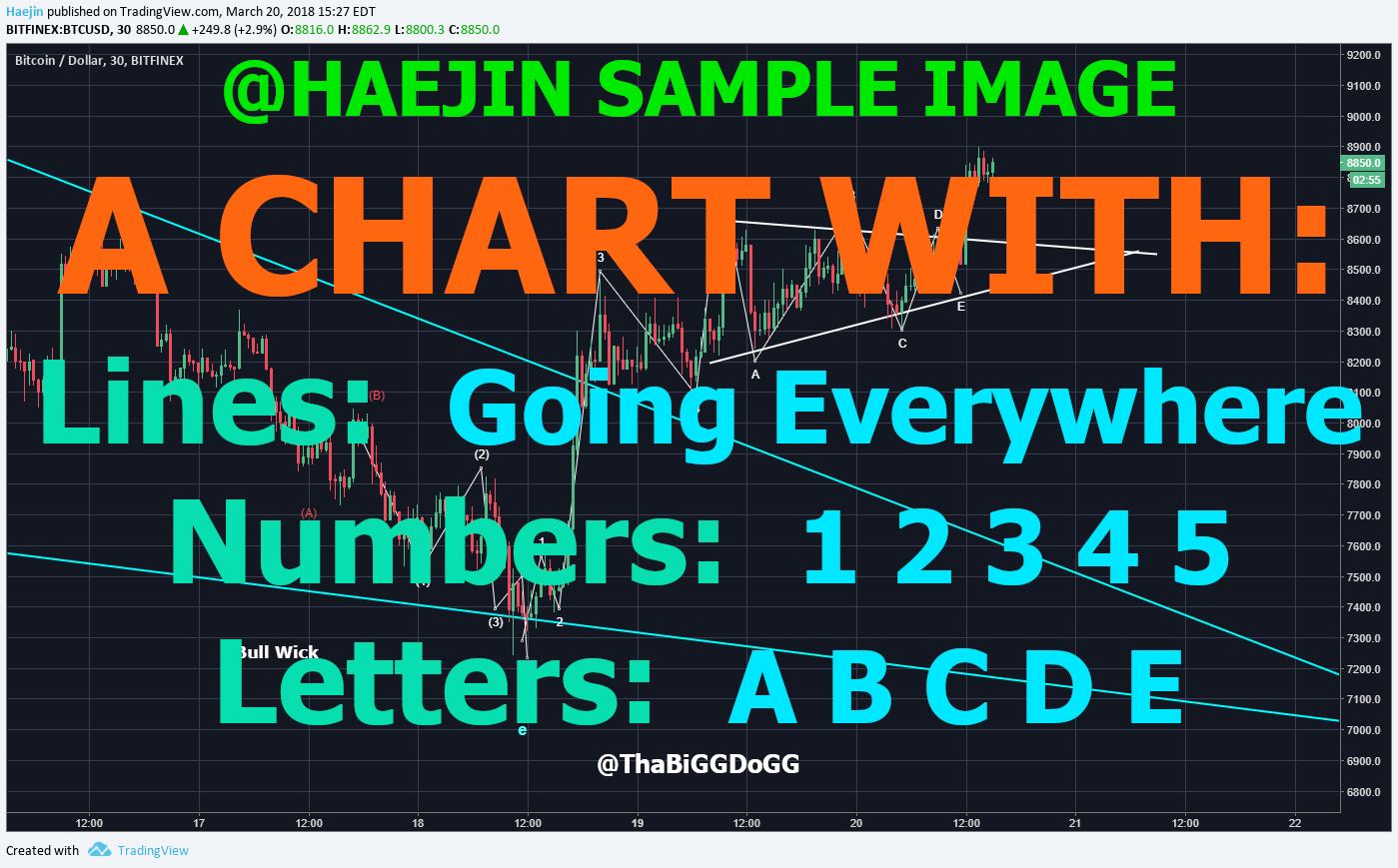 That's the way! Been building my reserves to buy the alt coins for a while. Super discounts on the way.

I think what we can learn from this is that either the price of Bitcoin will go up, or it will go down.

Or stay flat, that’s certainly a possibility too.

I'm a novice in this world of cryptocurrency, how would be the best way to start this self-learning? There is so much information that I do not know where to start

I started with Ted Talks to give me a basic understanding about blockchain technology then went from there. I'd also recommend reading the Bitcoin whitepaper. Bitcoin is the OG blockchain and it's whitepaper explains how it works, and why it's such a revolutionary technology.
https://bitcoin.org/bitcoin.pdf
If you want to dig further into the technology I'd recommend reading this book:
https://www.amazon.com/Business-Blockchain-Practice-Application-Technology/dp/1119300312/ref=tmm_hrd_swatch_0?_encoding=UTF8&qid=&sr=
It's a really good read if you're really interested in blockchain. It covers the history, the technology in depth, and it's practical uses in today's word in detail. Bitcoin has died 249 times so far... ,Don't trade the HEADLINES

Hi,
@haejin I always find your post good and booster and also informative. And I feel like to read those informative post of you.
In the core of my heart I appreciate your bloggs too.

Good analysis. Come to my blog and check out my opinions too! Let's think about various possibilities.
https://steemit.com/bitcoin/@goyapro/bitcoin-btc-update-wait-for-a-divergence

thanks for your sharing

Very informative post for all btc lovers... Thanks for sharing

I enjoyed your analysis of the charts.

Hello @haejin, I'm just wondering if you upvote me how I wish you will do that hahaha just kidding. :)

Upvoted and resteemed this blog :)

We must test the 5000s and upper 4000s on bitcoin and then I'm interested in a buy. Almost bought around $6300 when it got that low, but didn't pull the trigger.

We could go either up or down, things are not that clear for me D:

Ability to fall over

I think its going to 6K again over the next couple of months then a slow recovery back.

Here is my analysis https://steemit.com/bitcoin/@crits/bitcoin-price-drops-in-the-past-compared-where-are-we-going-how-long 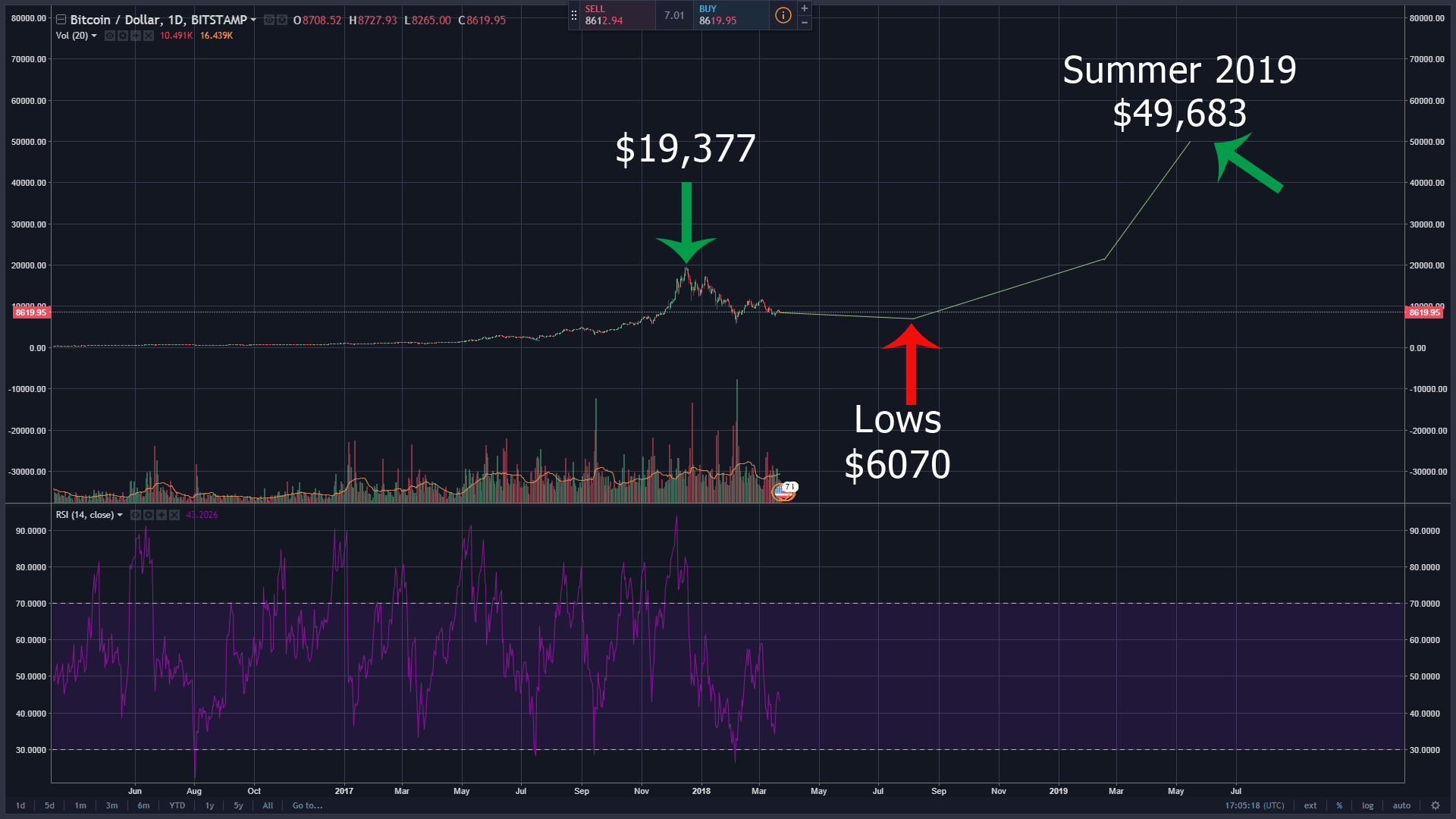 Whether price goes down to 6k or ranges between 6k and 12k, i remain bullish on Bitcoin long term.... Let price and people psychology do the acrobatics, am unshaken. My position!

BTC has to test 6900 level before a trend reversal can occur.

It seems that it is time to get to the largest amount of crypto before the prices rise again.

There is an old trading cliche: "Never try to catch a falling knife."
Another: "Bottom pickers get dirty fingers."
Be careful out there.

MACD was showing a buy signal couple of days ago hahaha. What is it showing now?

Congratulations @haejin, this post is the third most rewarded post (based on pending payouts) in the last 12 hours written by a Superhero or Legend account holder (accounts hold greater than 100 Mega Vests). The total number of posts by Superhero and Legend account holders during this period was 57 and the total pending payments to posts in these categories was $2009.14. To see the full list of highest paid posts across all accounts categories, click here.

Congratulations, your post received one of the top 10 most powerful upvotes in the last 12 hours. You received an upvote from @ranchorelaxo valued at 134.85 SBD, based on the pending payout at the time the data was extracted.

Bitcoin is going to touch 7600$ before some uptrend. It's not clear if this uptrend will continue or it will go down again very soon after that. 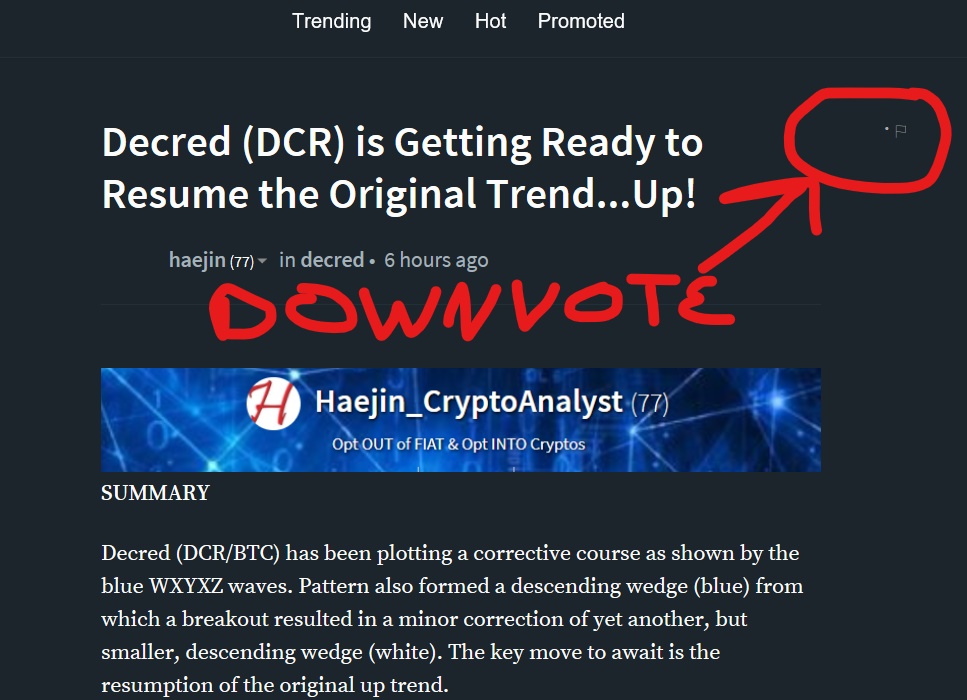