I breathed a sigh of relief, but it was too soon. He was back a few moments later with a ball gag that he shoved into my mouth.

“There,” he said. “Much better. Now roll over. I’ve got a few lessons to teach you.”

And I have some exciting news—Chapter 12 is the last chapter! That means this weekend I'll be posting a free download link for the entire novella (over 20,000 words) here on Steemit, plus an additional bonus scene, so look out for that, because it will only be available for a limited time.

If you want to get yourself caught up on the whole story, I've included links to the rest of the chapters at the bottom of this post. I’d passed out the night before after countless orgasms. Dr. Masterson had been tireless, passionate. His urgency seemed to be tinged with something dark, but then there were tender moments—a gentle caress, a kiss. It confused me at first, but as I laid there the next morning, thinking about everything that had happened, I realized how alone the doctor must feel.

As much as I wanted to knock him over the head and escape this place, I also felt something else. Pity? Or perhaps empathy?

I understood what it meant to feel alone.

If I stayed here, maybe there was a chance to start over with the man, to reason with him. I could explain to him how I enjoyed the sex—it was my kink, after all—but that I wanted to change the power dynamic. I couldn't live as someone's slave. Maybe he’d go for it. He had given me the most mind-blowing orgasms I'd ever imagined possible.

Rolling over, I saw that the bed was empty next to me. Part of me felt relief; another part felt a little surge regret.

This wasn’t going to change. The dynamic would never change with someone like this. Dr. Masterson might be lonely, but he’d actually gone as far as to buy me at an auction. That wasn’t really something I could look past. My judgement was clouded by my post-orgasm bliss. Wake up, Alexis.

I glanced around the room first, confirming I was alone, before hopping out of bed. I found a t-shirt and shorts folded next to the bed and quickly put them on. My stomach growled angrily. It had been several hours since my last meal, but I didn’t have time to think about that right now. I had to take advantage of the situation. If I could figure out a way to—

The door opened, and my heart sank. I’d lost my opportunity to run, because I’d been fantasizing about staying in captivity. I gritted my teeth in frustration. How had I been brainwashed and manipulated so easily? All of the sudden, I was very angry again. Angry at Dr. Masterson for playing me for a fool. Angry at myself for being desperate enough to get played. 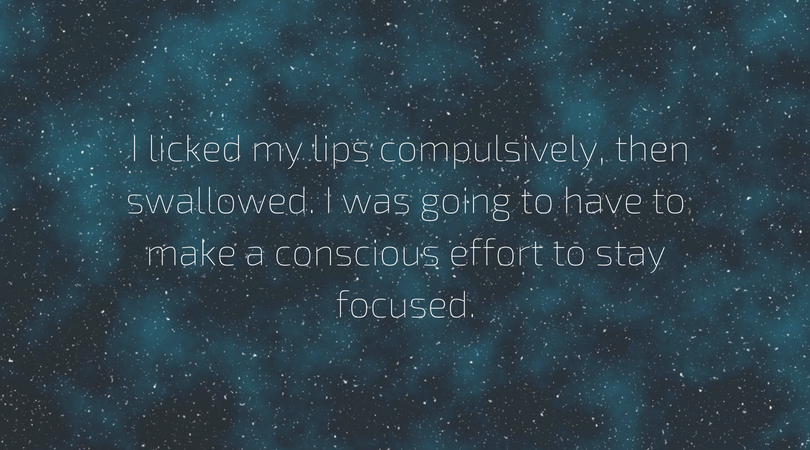 Dr. Masterson came through the door looking haggard. Where had he gone off to this morning? I’d been sleeping too deeply to notice.

He sighed and ran his fingers through his hair, and again I noticed how fucking gorgeous the man was. The tendons and muscles in his forearms and hands stretched and flexed as he rubbed his eyes. I licked my lips compulsively, then swallowed. I was going to have to make a conscious effort to stay focused.

“Is everything all right?” I asked.

He looked up, surprised, then shook his head. “The crew’s been out of line.”

I waited, but he didn’t offer anything else. At least it was a start. I tried another tactic. Licking my lips again, this time on purpose, I looked him up and down. “You look like you need to relax,” I said softly.

He picked up on my signal immediately and smiled, raising an eyebrow. “I didn’t realize you were so insatiable.”

I bit my lip coyly and eyed him again. Without another word he undid his pants and removed them. I didn’t need any further prompting. I slipped out of my t-shirt and shorts before coming over to kneel in front of him. Gently, I took him in my hands and caressed his cock, which was already growing hard. I used my tongue to slowly outline the tip, teasing him by lightly brushing my wet lips against his most sensitive places.

His member throbbed in my hands, now fully erect and rock-hard, as I began to slowly take him into my mouth just an inch at a time. He let out a groan, and I knew he was having trouble holding himself back. He wanted to shove himself into me. He wanted to fuck my mouth like he’d done before. I braced for him to grab hold of my hair, but instead he rested his hand lightly on the top of my head. 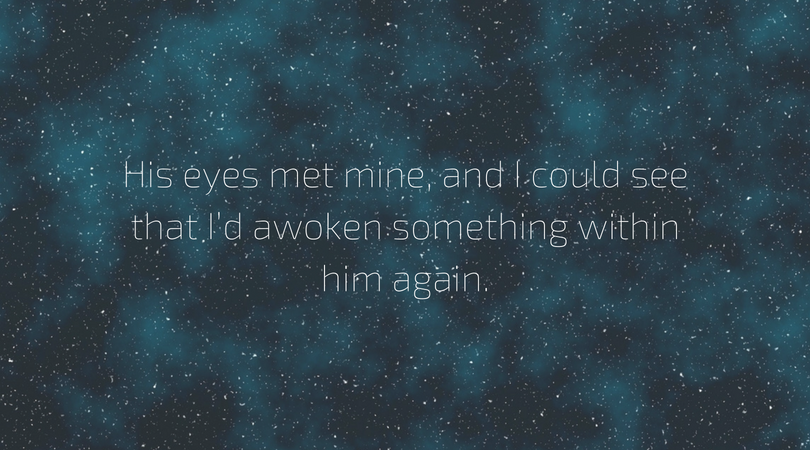 I took him deeper into my mouth now, but kept my pace slow and my movements controlled. He shuddered and his hand pressed a little harder on my head as I took all of him, holding there for a moment, and then slowly moving my head back. I lifted my eyes to look up at him as I continued to move back and forth. His eyes met mine, and I could see that I’d awoken something within him again.

“Faster,” he said. It came out almost as a growl.

I increased my speed slightly, maintaining eye contact as I moved.

His hand tightened against the back of my head as he pressed harder now, guiding me in an increasingly urgent rhythm that ignited a heat within my own body.

I gasped in surprise as he pinched my exposed nipple, squeezing hard. I cried out, but the sound was muffled. It took all of my concentration, but I maintained the pace as he continued to guide me with his hand more aggressively now. He slapped my breast hard then gripped it tightly with his hand. A wash of white-hot pleasure swept through my lower body, and I gagged hard as he shoved deeper into my throat and held me in place. He moaned again, and I knew he was getting close. I was glad, too, because I could feel the tension building in my own body and an increasing slickness between my thighs. It was starting to get distracting.

He walked over to the bed and beckoned me over. “Come.” 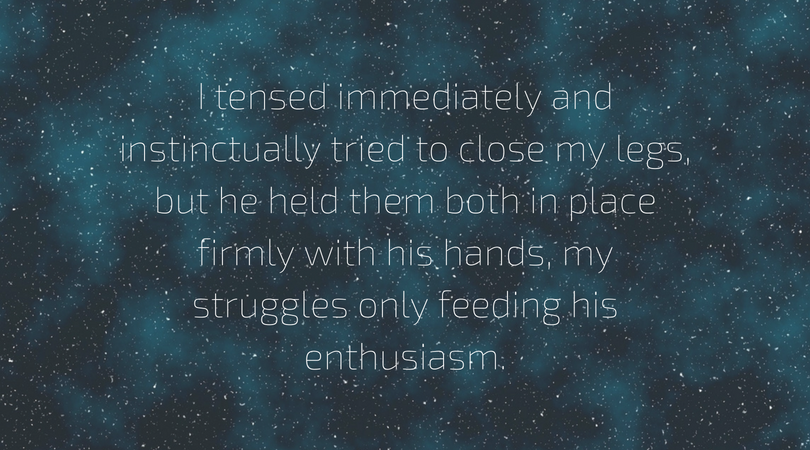 I sat on the bed, and he climbed on top of me, pushing me back. He began kissing me on the neck, working his way down slowly. He stopped at my breasts, paying special attention to each nipple, teasing and flicking with his tongue. Before I could protest, he was spreading my legs with his hands as he bent to kiss me deeply in the slick folds between my thighs. I tensed immediately and instinctually tried to close my legs, but he held them both in place firmly with his hands, my struggles only feeding his enthusiasm.

Looking down I saw his muscular shoulders and arms, his mess of dark hair, as he pressed into me more deeply. My body spasmed as the intoxicating ache deepened, threatening to take control again. Then he pulled back slightly, and his touch became light, tantalizing, as he used his tongue in a technique similar to the one I’d used on him earlier. My left leg began to tremble uncontrollably, and I heard—and felt—his muffled laughter as he tightened his grip on my thigh, sending another wave of euphoria through me, bringing me to the brink. He hooked both arms underneath my thighs and hitched my body toward him, pulling me close into an intimate embrace as he now focused all of his attentions on my clitoris. I clutched at the bedsheets, teetering at the edge of oblivion. My back arched, and I squirmed, grinding my hips into him. I fully gave over control to the urges that overwhelmed me, crying out as waves of pleasure washed through me.

A moment later, I collapsed back onto the bed, drowsy and dazed, my hair a damp, disheveled mess. Dr. Masterson climbed up and collapsed next to me, grinning. He looked quite pleased with himself. He closed his eyes and seemed to fall asleep almost immediately.

After listening to the sound of his rhythmic breathing for a few minutes, I quietly slipped out of bed, picked up my clothes, and crept from the room. I had another chance to escape. And this time, I was going to take it.

Thank you so much for sticking it out and reading this far! I really hope you enjoyed yourself ^_^ I know I did!

If you're interested in catching up before then, check out the links below to all the previous chapters :)

Need to catch up?

Submit
$2.28
6 votes
4
Authors get paid when people like you upvote their post.If you enjoyed what you read here, create your account today and start earning FREE STEEM!
Sort Order:
[-]
try3 (45)  ·  2 years ago

Speaking of sticking it out, Andromeda is also finding down, but no where near it's last chapter yet. Stop by and catch up if you haven't done so already.

Haha unintentional, to be sure ^_^ Or was it?

Today I've set aside some time to catch up on Anna's story. In fact, I'm going over there now!