I have joined Steemit on my birthday, which is on 28th May and 8 months later, I'm pleased and thankful to have reached 999 followers. If you become my 1,000th follower, please let me know in a comment! 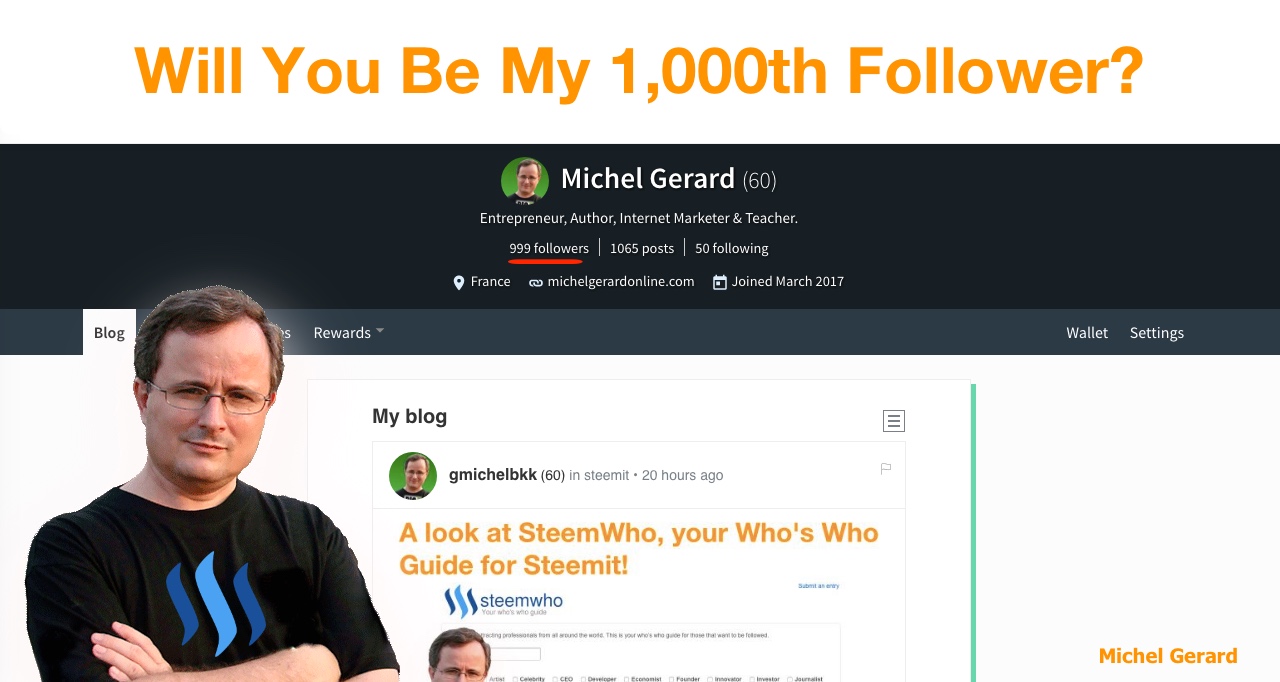 A big THANK YOU to all of you who are following me!

In this post I am going to review some of the highlights of my journey on Steemit during these 8 months.


I was invited and inspired by @jerrybanfield to join Steemit and I wrote my first introduction post on my birthday. On that day, my daughter and I played with colorful wigs and I wore one for the post.

If you missed my introduction post here it is: Joining Steemit on my Birthday! I made $19 on this first post and it was very encouraging.

At that point, I started to think: "Is it really worth my time?"

I wrote a few more tutorials and then gave up for a month.

Then, @jerrybanfield encouraged me again with his vote that helped increase the rewards on my posts to $6+.

On the fourth month I wrote a post that @jerrybanfield resteemed and his audience helped push the post to $46.92. That was the best I ever had on Steemit.

I continued to write posts that earned in the range of $6+ and 3 months ago another drop with posts in the $2+.

At that point, I was discouraged again!

I really thought I was going to just concentrate on something else.

Instead of quitting I decided to continue writing daily no matter what and I started using upvote bots to keep my posts at $6+, which is more motivating than $2, even if you spend the difference!

Using the bots helped show my posts to more people and I started to get more followers, upvotes and comments. I then increased my budget for bots from 5 SBD to 10 SBD, and to 15 SBD where I am at now.

I am satisfied with my earnings now going from $30 to $60 in rewards as I grow my Steem Power every day.

It is still a roller coster with the price of STEEM and SBD going up and down like a yo-yo, but as I am holding all rewards, they will be more valuable in the future.

Now that I am at 1,000 followers and writing a post daily, the new challenge is the growing number of comments on my posts.

I reply to all comments and I upvote everyone who leave a comment on my posts. Meaningful comments get more rewards from me.

This is starting to take quite a lot of time and I hope I will be able to have the time to continue responding to comments.

Finally, these are my achievement on Steemitboard: http://steemitboard.com/board.html?user=gmichelbkk

I hope that this post is useful for you to see that Steemit is a roller coster and that sticking to it is a way to get some success with it.

Would you upvote this post and follow me for more because this will encourage me to continue writing more posts about Steemit?

Thank you @heimdallr for following!

Relationship is built in two ways. When I find someone's post interesting, I follow him/her. Now you have 1054 followers, but you follow 52 people. I think it would be encouraging when you follow your followers if you find their post useful and interesting. What do you think about that, @gmichelbkk?

You share valuable content and you always reply the comments. That's great! I like your post. Thank you for sharing your struggle on steemit. It will inspire many people to keep posting regularly. Wish you all the best!

Thank you for your comment @rezoanulvibes. I follow a number of people that is managable for me to see posts I like in my newsfeed. I do not do the follow me, I follow back thing, and need to see several good posts for me to follow. I prefer to read and upvote all comments on my posts as long as I can do it, which is I think better than to follow thousand of people you don't see their posts, or to upvote my own comments.

You brought up some good points. Thank you for sharing your view. I really appreciate that!

Congrats @gmichelbkk. Please pray for me also to get success like you.
Can you please answer these questions

Thank you. The value of Steem and SBD is going up and down a lot, and what you see is just that. Also Steemit is always late on the rate it uses.
Powering down takes 13 weeks.

Hello!
Excellent message to encourage minnows.
Like a lot of things, it takes patience and above all to follow the goal we have set for ourselves.
I am happy to have discovered steemit where I can share my passions and also learn a lot with people from all over the world.
For me it's the garden, the nature, the animals that are part of my job and I'm happy to share what we have in our region for people who do not have the opportunity to travel and see what that we are close to home.
And I thank all those who make me discover things that I would never see with my own eyes.
Steemit is an exceptional adventure that grows thanks to people like you @gmichelbkk. Thank you

I appreciate your comment @archeothot. Thank you very much.

I really enjoyed reading your progress over the course of the last eight months. Being new, it can be quite discouraging to see some of my posts only make a couple cents. I used a couple bots recently and I was feeling guilty about it. It’s nice to see more established people using them too. I promised myself that I would continue on for a year trying my best to see if this platform will work for me. I really believe that this is the best opportunity out there for someone like me that has never written content before to have a chance at blogging. I also want to thank you for the opportunity to submit a story to the supernatural writing contest. I really hope that there are more contests like that in the future.

I am glad that you like the post @emmyem84. Why feeling guilty using bots? Using them also increases the curation rewards for people who upvote your posts. Whales who have a lot of money and bought hundteds of thousands of Steem do not feel guilty upvoting themselves generously!

I never thought of that! You are right! I guess I was feeling guilty because I felt that the post wasn’t getting most of the payout with upvotes from other people. But you have made me feel better :) thank you!

I felt exactly like @emmyem84....I'm also new. This is a really good explanation! I didn't think about the curation rewards being bigger for upvoters. That's awesome! Thanks for this explanation.

Thank you @nomadicsoul for your comment and I'm glad the info is useful for you.

I could've written this same post myself! Haha I feel the same. I'd like to read your supernatural story! I'll try to find it on your page @emmyem84. I just wrote one as well! I'm not sure why I felt so strongly compelled to do it...because I've never been brave enough to share my story before.

Congratz on your steemit journey

Congratulations on a job well done!I'm looking forward to more of your quality content.if have some seconds please review my post

Guess what.
Its only 12 days after you posted this and I'm follower number 1272!
At this rate you'll have,, umm,, lots more followers in ..er... not too much time!
Good luck and keep writing.

Thank you for being follower 1272, it's a nice number. It seems that after the 1000th there has been an acceleration...

I'm not your 1000th but I just followed you. LOVE the wigs haha, you're obviously a fun person to put yourself out there like that with wigs.

Haha, love it. I just wrote my intro post a little over a week ago...but instead of wigs, I have gigantor glasses!

I am glad this has entertained you!

The feeling of frustration in steemit has been sustainably overcome @gmichelbkk for the past months. Its been my two months now in the community and the emotions are mixed! Joy, disappointments, hope, determination and a lot more... But in the end steemit had taught me more especially the value of friendship and making friends. Its like getting out of my comfort zone. We are just happy that a lot of people here are very helpful. More power and rest assured we will support @jerrybanfield as our witness! Thank you...

Thank you @nickjon for your comment and supporting @jerrybanfield as a witness.

This post has received a 6.09 % upvote from @booster thanks to: @gmichelbkk.

Thank you gmichelbkk for making a transfer to me for an upvote of 6.34% on this post!

This post has received gratitude of 2.40 % from @appreciator thanks to: @gmichelbkk.