The Whistleblowers (Series): #3 - Exposing 911 as an Inside Job - Susan Lindauer, CIA Asset, Imprisoned & Drugged By US Gov/Mil. to Silence Her

In this third post in this series of Whistleblowers, we will listen to an important voice who exposed the events of the 911 attacks in America.

So many of our problems today began on the day of the 911 attacks, including the continual fighting in several areas of the 'middle east' and even the rise of today's ISIS threat - that it is imperative that the full truth be known about what may be the biggest coverup of crime ever to have occurred in human history!

PLEASE NOTE: THIS POST WAS IMMEDIATELY DOWNVOTED AND THUS CENSORED BY THE ACCOUNT @fatboy - AS SOON AS IT WAS POSTED, MAKING IT INVISIBLE TO EVERYONE ON THE NETWORK!

Susan Lindauer was right in the midst of US Government and Diplomatic operations during the period of the 911 Attacks in New York and the Iraq war. As a CIA Asset, she was tasked with helping with negotiating weapons inspections with the Iraqi government and states that an agreement for peace and weapons inspections was fully in place in February 2001. She was forced to threaten the Iraqi Government with war if they didn't provide intelligence regarding a conspiracy to hijack airplanes that attack the World Trade Centre. She therefore claims that the US government new about the 911 attacks many months in advance, totally contradicting the public claims of George Bush and numerous cronies.

The US government detained her in a military base for 1 year and was under indictment for 5 years - attempting to silence her using powerful drugs - since she presented a threat who wanted to speak out about the truth of what occurred prior to 911 - hugely contradicting the government's narrative. The charges were absurd and entirely trumped up from almost nothing - only really being able to be initiated due to the use of secret courts with secret evidence under the Patriot Act (which she identifies as being almost identical to laws used under the historic Soviet tyranny in Russia). Blueprint of a complex inside job

Much of what she states will be already known by those who have researched 911 and listened to other speakers/researchers, yet she has insights from the diplomatic area of government that are relevant.

There are a huge number of other significant whistleblowers from the events of 911 that hugely flesh out the image of what transpired and I will include more in this series as we continue.

If you have any thoughts, feedback or inspired ideas on how to change the situation for the better then let me know in the comments below. Thanks!

Yeah, like I was telling you in your other post. They can't actually censor you. They can try to but nothing is actually hidden on the blockchain.

Including who the opinion down voter was and should not be followed or supported by anyone if that's how they wish to be. 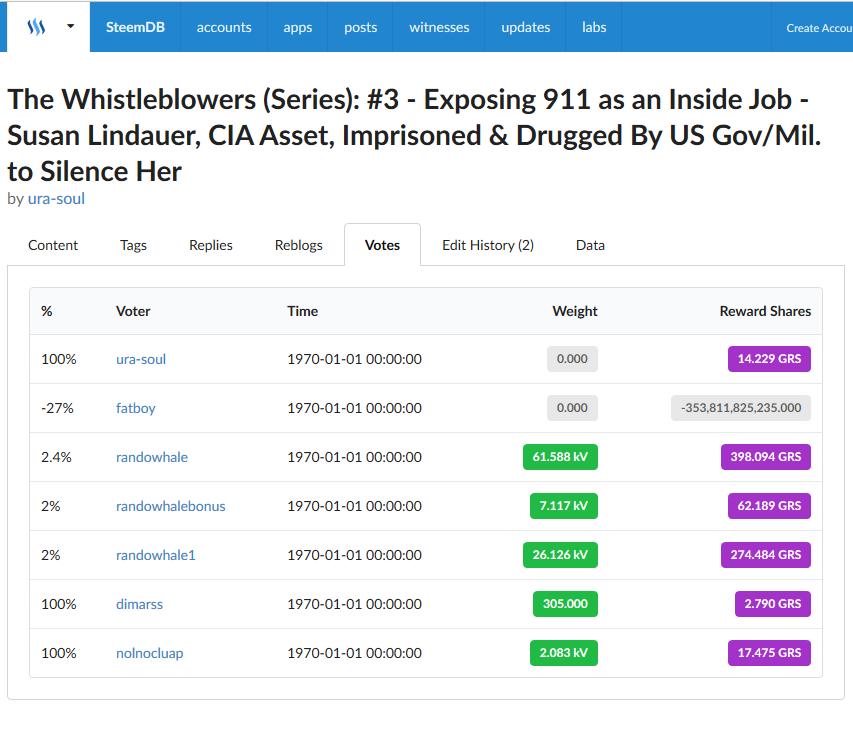 Any URL for a post you can change the steemit.com part of the url to steemdb.com and pull up all kinds of information.

There is also another new tool phist that does cool things I'll try to find out more.

EDIT: Here is your assailant... Thanks to HF19 not too difficult to counter. You write interesting enough stuff they shouldn't be able to do much to you. If I had been following them they would have just lost a follower, but I was not.

Thanks for helping here @dwinblood

@fatboy flagged another user, @clarityofsignal, without explanation or commentary not too long ago. The post was her own from another site and she's bringing a very important subject to light.

The post was not spam/not plagiarism/ the rewards were not too high...

I think @fatboy simply disagreed. I think at the very least a comment or explanation needs to accompany a flag in these kinds of situations.

Yes, some of these topics are contentious and controversial but let's at least lets have a dialog about the issues before dismissing them offhand.

Anyways, i appreciate that you took the time to make a post with good advice for noobs who get flagged arbitrarily.

@clarityofsignal is someone who came to steemit due to me interacting with them over a Ben Swann issue. I'll go check it out.

Thankyou - yes, the human involved can be tracked and traced :/
I am aware of that video too, yes - she makes some valid points. There are so many voices involved it is necessary to put a lot of time in to correlate everything that is being said.

I wrote about 9/11 last year. I'm not posting this link to promote myself but rather encouraging anyone that wants to know more about 9/11 if more than welcome to use any of my content and share it with as many people as they wish.

All your work is brilliant buddy. I'll check it out shortly. Any post that helps the uninformed discover the truth is worth promoting.

I found you on @freezepeach! Upvoted! You have my support. Truth has a voice.

Aloha! Thanks for the tipoff - I like the idea of @freezepeach a lot; great name :)

Yes, I hope the project really grows wings, and is able to counteract the downvoting shenanigans!

How does 1 person have the power to block a post so fast just becasue he doesn't like the content? His rep is less than yours. Is it because he has more steem power?

He can't actually block a post if his rep is lower. He can drain all the initial rewards, but there are enough of us we can counter it. None of us should follow or vote for people that do this.

Ok, good to know - yeah that is a bit ridiculous. Thank you.

Thank you for posting this (somewhat amazingly still) controversial material @ura-soul. I missed the first two posts but luckily happened to find this one. It's interesting that you make reference to "historic Soviet tyranny" in the context of the Patriot Act as similar references have been broadly made in the financial sphere also in terms of Central Bank manipulation and planning.

These are growing trends that are easily missed on a day-by-day basis but become obvious when viewed over a broader time span. Unfortunately our race is typically not accomplished at assessing issues with relevance outside of the day by day monotony and I feel that is why we are condemned to repeat the lessons of the past.

Thanks again for this contribution.

You are welcome! note that this was the first time a post I have made on Steemit was attempted to be totally censored and, in fact, it would have succeeded if I didn't know how to circumvent the attack.
This series will be quite long and you can, of course, review the earlier two posts at your leisure!
Thanks for your support.

May I ask about the particulars of the censorship that you detected and how you circumvented it?

Within seconds of the post being made, it received a negative vote from an account that holds a large amount of steem power. The result of that was that the post become totally disabled - since it now had a negative vote count. I was able to resolve that by paying for a vote from randowhale, which thankfully currently involves receiving 3 votes in total, which made the post visible again.

Nice work around! I'll have to keep my eye open for similar behaviour.

Yes, there are others too, I am sure!

Thanks @ura-soul. Any censorship this time?

This time, no problem :)

Thanks! Years of hard work already completed.. Maybe not much more to go!

Ye mate i been through all your posts. love what your doing! great work on sourcing the info! ill be following you all the time
cheers mate

You are welcome, thanks for your support. I followed you back :)

Thank you @ura-soul I will start reading right away! Thank you

Even your edits can't be censored by yourself. https://phist.steemdata.com/history?identifier=steemit.com/politics/@ura-soul/the-whistleblowers-series-3-exposing-911-as-an-inside-job-susan-lindauer-cia-asset-imprisoned-and-drugged-by-us-gov-mil-to 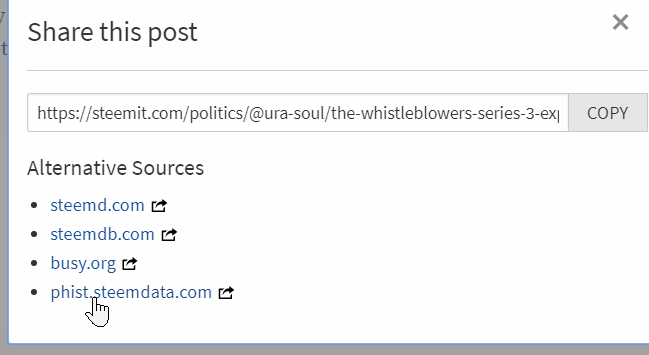 i understand that the underlying blockchain is not censored, but that is little consolation to those who are being shut down on steemit.

I have known this for atleast a decade. Really quite obvious for anyone who knows how to think.
Its great to see lots of research and data though to "prove" it. Still doesn't get through to a lot of people though sadly.
Good job. SteemON!

Thanks! Yes, this information has been around a while - I have several other good videos on this exact subject.. More to come soon! Followed btw :)

Thank you for posting this

you are welcome! Post 4 in this series is online and is allegedly a witness to Dutch 'Royals', politicians and George Soros involved in ritual child murder.

The truth scares the shit out of people. Thanks for being brave. Those clinging to the lies are now clinging to them on the blockchain, eventually lies will be useless.

Yes, fear is always involved and so often being denied. The result is that it effects behavior without the one involved realising it is occurring. There may also be cases though, where actual perpetrators are attempting to cover up crimes they were involved in.