gringalicious (78)in #photography • 3 years ago (edited) Now I'm sharing some of the photos I took on the third day of my travels. 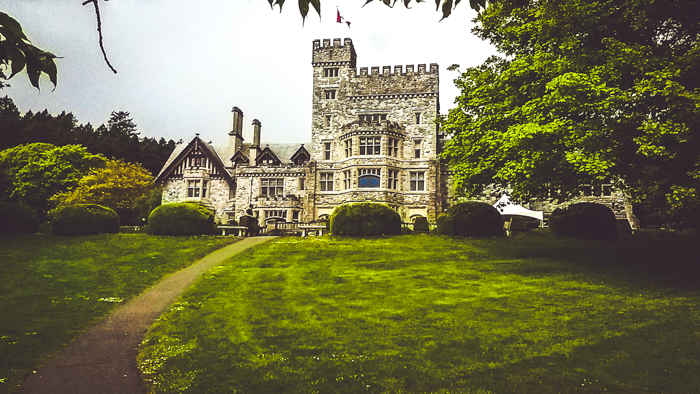 This day was probably the most adventurous of them all, simply for the fact that I opted to use public transportation in an unfamiliar city. I rode the bus towards the outside of the city to pay a visit to the famous Hatley Castle. Let's just say that after everything I had to do a little walking to get to where I was going, but the good news is that I got there. Oh, but the bad news is that I forgot my camera's SD card so all of these photos were in fact taken on my phone. It just goes to prove that you don't need a fancy camera to take some good shots. So the history of this building is very interesting and I wasn't aware until my visit to Craigdarroch Castle the following day that there was a connection between the two. 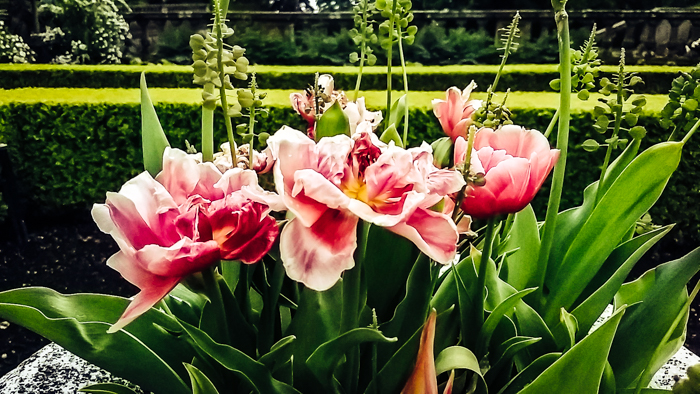 I won't go all 'history teacher' on you and give you the whole story, but basically this castle was built by the son of Robert Dunsmuir, James Dunsmuir. Apparently, after the death of his father, his mother was made the beneficiary of the estate and the large family business. I'm not quite sure what led to what, but I'd say it was a classic case of why you should never mix business with friends and family. It ended in a lawsuit over the business in which James won and I visited the Craigdarroch castle the following day and was able to tour the entire thing so I'll be sharing that soon, but as for Hatley castle, it unfortunately wasn't open for touring on this day. Guess what? This building has been used in so many movies and tv shows that you've probably seen. Namely the 2016 Deadpool movie and most of the X-men movies. It was also in the TV series Arrow and Smallville. So yeah, I half expected a superhero to come around the corner. Aw, well no such luck but I did see some beautiful things. 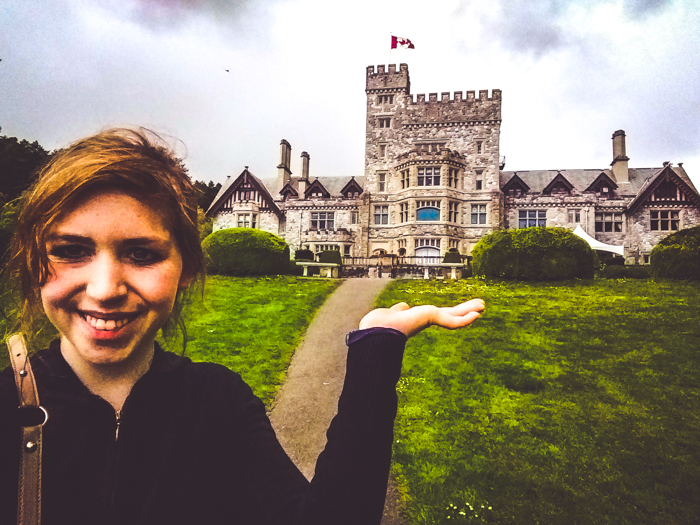 So in the next post I'll be sharing the photos from the other castle I visited. Have an awesome weekend! For more great food ideas and inspiration, please do not forget to look at my other recent posts

And, by the way, to all the minnows out there, my intro post did a huge $0.21. The key to success on Steemit is to be consistent and persistent. Click on the link below for some great tutorials on how you can also succeed on the steem blockchain: 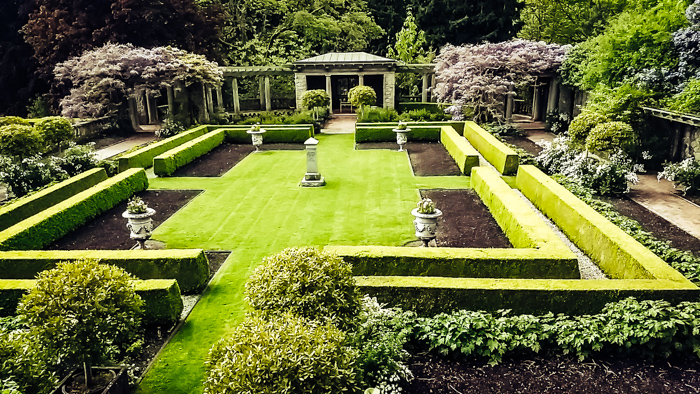 Do you want to learn more about me? Click here to see a recent @wadepaterson interview with me - 20 questions with @gringalicious

How are you doing today? I know you are doing great and fine but I still need to ask. I can see all the fun and excitement all over you. Your smile can literally melt a heart made of stone.

I am sorry I just checked my mailbox for your post, I had such a busy day but it has nothing to do with cooking. I don't want to ruin the kitchen utensils for you before you come back, since we are still going to try that "Yam Sushi".

I can see these amazing castle and it is such a delight to know even if I am not there with You, I must have seen it in Smallville, maybe the Lex Luthor mansion?

Everything in life is a blessing in disguise. Forgetting the SDcard must have hurt, but your phone camera did an amazing justice to these pictures. They look way better.

I am sorry you couldn't see the Hatley Castle, but you got to see the Craigdarroch castle and that delights me. Really an adventurous day and I can't wait to see pictures of the other castle you visited. Thank you for sharing the story and taking me along with you on the journey, albeit with the posts. Thank you for all you do.

Till I hear from you again, stay beautiful.

With love,
Olawalium
Your taster.

thanks for your writing @olawalium

Such a huge honour my friend. Thank you for all you do. Really appreciate it.

Wow I live in Victoria B.C. Congrats on taking such magnificent shots of the wonderful Hatley Castle. When were you in town?
No one ever believes me when I tell them how this is where XMen was filmed till they google it or I show them around.

Congrats, wonderful photos, the Castles are amazing. You are definitely rigght, we don`t need a fancy camera to take good photos!
Good luck in your travelicious in Canada
Regards

thanks so much @mjoa07, great commenting. I am home now, but I leave for New York City on Wednesday. More travel posts coming soon

She's one of the few steemians who create very good photos here.

Awwww, that's just so sweet of you to say @gvincentjosephm. Thanks so much my friend!

Thanks @timuann! I'm really flattered by your compliments!

thank you for your appreciating of my comment.. my friend @gringalicious.. very well done..

Wow, you always share wonderful pictures, this is an incredible garden. Located at where?

This garden is on the grounds of Hatley Park and Hatley Castle in Victoria B.C.

its so awesome, your sense of fotography is so good, please check my blog :D

Ah! I'm so glad to see that you are on an adventure! Per usual your photos are fantastic!! Nothing's better than enjoying a bit of Gringa-chronicles on a lovely Sunday morning! Hope you are having liters of fun😊

I certainly am, thanks @genirkat! (P.S. I can't wait for the next meetup!)

Self Relaxing Photos, Thanks for your participation.

I'm so glad you liked it @ahmedcation

What a nice Castle and great photos too. I love that flower you have there @gringalicious. You're so lucky!

Oh, I feel truly blessed to be able to travel and share. Thanks as always for your support!

Your pictures are awesome. I would like to take part in your photo contests. I love every picture of you. Everyone can take pictures but not all the good quality pictures can be collected. A good quality photo shoot. I'm your photo fen. Real and clear your photos. You got to sell the pictures. i like your photo. i am fan of your photography.

welcome friend.please see my post and upvote me. your one upvote make my id very powerful.

I think so too. Thanks for taking the time to comment @kamran600!

Ohhhh! Those shots so amazing! Especially the picture of building which they used it in the movie. Good luck.

Thanks @creativewoman. That's so kind of you!

A wonderful journey that gives a beautiful color in life, An honor can be part of your journey. @Gringalicious very interesting things can be an important remark in an adventure that can be a beautiful memory, another thing that can be noted from what that we see and much of the past history we can get and become the motivation in our lives.
it is a journey that gives a very meaningful light of the buildings and beauty that we can enjoy. A happy I feel can be part of your journey.

my greetings from Aceh Province, Indonesia. 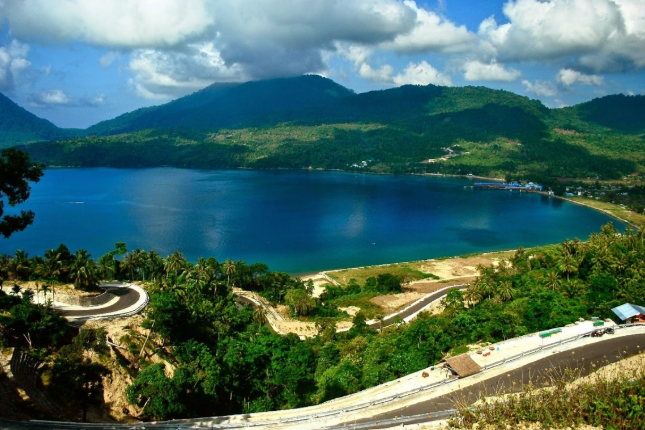 Wow, incredible shot @lovelyworld. Thanks for your support!

you are welcome My lovely family @gringalicious

Glad to see you are traveling again and sharing awesome photos of your trip. Didn't pretend to be Jean Grey or Storm at the castle though? :)

Haha, I should have pretended. Thanks for taking the time to leave such a great reply @filnette!

Wow! wonderful pictures, I love the places you show when you travel. I congratulate you.

It would be nice as a present for my mother today in her day !!

Go for my profile and offer me your support if you can ... Thanks.

From what I see you are still on a walk, I hope you take advantage of that weather and delight us with your dishes, and enjoy your beautiful walk friend @gringalicious

thanks so much for the great commenting @jlalvarez

you are travelling wonderful places. I often see your post. I think you are a travel lover

I am indeed. Thanks @mdrakib!

Thank you so much @sabbir1213! I'm so appreciative to have friends like you!

I am so glad you were able to go on this adventure. Great pics!!

It really was the best! Thanks @noboxes!

So beautiful place and nice pictures!

thanks so much for sharing your travels with us

I'm so glad you liked it @mamaloves!

I love the x-men wolverine is my favs

Brilliant to see that awesome shots loving the travelling adventure :)

thanks so much @blazing

Pretty fantastic pictures considering they were shot with your phone! Victoria is a magical place. I was only there for a day, but loved it and look forward to going back.

I always love it when you drop by, thanks so much for commenting, I do not know how you find the time. Looks like I'll be seeing you soon in The city! Exciting!

Wonderfull pics!!!! I looove your post! Very beatiful, thanks for sharing. Followed!

I invite you to visit my profile, I have a similar post.

Hai gringalicious
You always share beautiful photography on your blog. These are great photographic photographs

I've just discovered your blog and your recent series about travel in Victoria, BC. I wanted to say I'm enjoying reading about my hometown from the point of view of a visitor. Great post!

Wow, that's so great to know I've got Steemian friends literally everywhere. I truly enjoyed my time in your city, @keithboone!

For a total calculated value of $152 STU, $266 USD before curation, with approx. $38 USD curation being earned by the paid voters.