Hey guys, here is my take on the Denver Broncos key additions and key subtractions over the off-season. This is my tenth article on Key Movement, so I decided that this would be the last time I put my introduction in here. Going forward, my hope is that new readers will read the previous articles.

I've been a diehard fantasy football player for nearly a decade now, and I am extremely active in my research all year around. I plan on sharing my thoughts by blogging on Steemit for the upcoming season, so if you like to play fantasy football, you should definitely follow me. I am active on Sleeperbot, which is a fantasy football app that sends updates in real time, but there is also a community there that is very knowledgeable. You can find me on there @USER00100000.

Before the season starts, I will be breaking down key moves around the league as they happen, I will share my draft plans and key targets for the upcoming season, break down key statistics, and anything else that I can think of. During the season, I plan on breaking down key statistics each week, look at trade values around the league, player matchups, start/sit, and again, anything else I can think of to help you win a fantasy championship this season.

So far, we've seen a lot of movement this off-season. I'm going to start off by highlighting some key additions and subtractions by each team. I'm not going to spend time on players that I don't think are worth discussing, so keep in mind these are not intended to be complete lists, just important players (and possibly coaches) that moved and may have an effect on other players fantasy production. 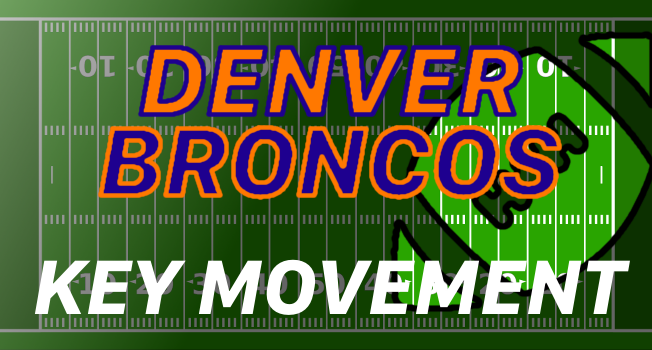 The Broncos had a pretty good off-season despite losing tackle Russell Okung (73.5) from their offensive line. The good news is that they brought in guard Ronald Leary (80.4) and also drafted tackle Garrett Bolles with their first round pick, so realistically, we can say that this offensive line will likely improve. That won't be hard to do anyway, considering PFF ranked the unit 26th overall out of 32 teams.

Their biggest issues last season came at right tackle, which we can assume they will try to fill the hole with newly signed Menelik Watson. Watson had a lot of injury problems last season, but the Broncos believe in his talent. PFF gave Watson a 49.4 grade, so even when he was healthy he really did not play that well, but that could be due to lingering injuries. Either way, this unit should improve, which will help the rest of the offense.

They also added running backs Jamaal Charles via free agency and De'Angelo Henderson in the draft. Charles has really struggled with injuries throughout his career, but he has a legitimate shot of making this roster. As long as he remains healthy, he could be an underrated fantasy asset and his ADP is priced fairly at RB38 as the 102nd overall player taken. There is a chance that he can vastly outperform this position, but he is a major risk, I would not recommend reaching for him. Henderson should not be on your draft list, but keep an eye on him. Both Charles and C.J. Anderson have had issues staying healthy the past few years, and if those two get hurt, Henderson's only competition would be Devontae Booker. Booker vastly underwhelmed last year, so there's a chance that Henderson can see enough work in this situation to warrant a waiver wire pick up at some point in the season.

The Broncos also added wide receiver Carlos Henderson and tight end Jake Butt in the draft. Even with the departure of Josh Norwood, it's unlikely that Henderson will see any significant playing time this season. There is a chance that Henderson could surpass Jordan Taylor, Bennie Fowler, and Cody Latimer by the start of the season, but unless Demaryius Thomas or Emmanuel Sanders get injured, that role will not yield enough volume for fantasy. Nonetheless, I'll still rate Henderson as a "keep an eye on" type of player. Butt is still recovering from an ACL tear and although he should be ready to go by week one, it's unlikely that he will surpass A.J. Derby and Virgil Green for pass catching duties this season.

The bottom line: The Broncos made some interesting additions that have a good amount of upside. The offensive line should improve, and as long as Jamaal Charles makes the team and stays healthy, he could make an impact. Keep in mind, they still have C.J. Anderson, so that "impact" could end up being one that kills both of their fantasy values, but I honestly think if Charles is healthy, he is the better back and should be the more productive of the two.

If you enjoyed this article and you play fantasy football, you should definitely hit that follow button and smash that upvote button! Next up, I will be evaluating the key moves on the Detroit Lions.

Submit
$2.63
9 votes
3
Authors get paid when people like you upvote their post.If you enjoyed what you read here, create your account today and start earning FREE STEEM!
Sort Order:
[-]
randowhale (67)  ·  3 years ago

Nice effort . I see it requires alot of brain power to come up with the idea . Keep up the good work .

And please check my blog i uploaded paid android apps for free if anyone interested .

I'm with you on Charles, guy used to be unstoppable!