NEO is correcting. I've updated the Elliott Waves to indicate the projected price pathway. The video has lots more details. Price broke out of the bull flag pattern and is heading up but expect corrections. Price for blue wave 2 could touch the upper line of the bull flag and lift off from there to target blue wave 3 and then wave 5. I've thus raised the target to $78.02 The below is NEO/BTC pair. It is not as advanced in breakout process as the NEO/USD . However, an alternate count of perhaps one more lower low is presented. 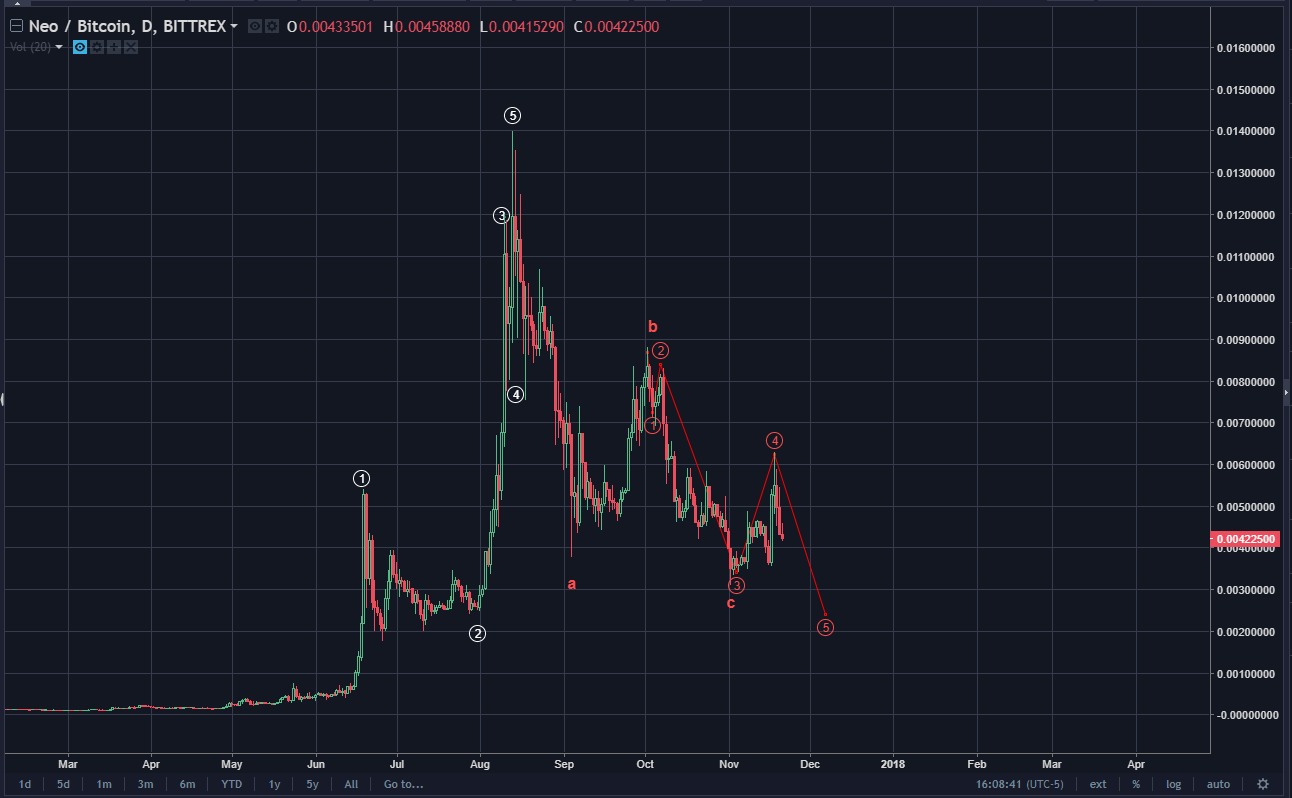 However, my primary count is represented below and the Elliott Waves project the pathway to 0.01397 BTC. Legal Mumbo Jumbo: This is only my opinion, make of it what you wish. What does this mean? It means it's not advice nor recommendation to either buy or sell anything! It's only meant for use as informative or entertainment purposes.**
#money #cryptocurrency #blockchain #neo
3 years ago in #bitcoin by haejin (86)
$21.01
143 votes
Reply 14
Sort:
[-]
patientguy (28) 3 years ago

Thanks again for your very easy to understand lessons. By the way Haejin, I plan to pay for my niece's and nephew's education with the profits made by learning from your videos and forecasts. I also plan to donate some of these profits to a local community organization that helps kids with medical needs whose families can't pay for treatment.

If you have time, BTG would be a great coin to analyze. I think a lot of people would like to see it including myself, it looks like a KABOOOM already, with a lot more mojo for a further bull run.

If you have the time to do so.

it got added to bittrex. Got pumped and fomo happened and then got dumped. 425 now sitting at 244. It was just pump and dump.

but it looks like a classic 5 wave impulse. going onward to complete the 5th wave before a correction. From what I understand even a pump and dump can be measured using E.W... Right?

Of course, even though few will ever believe. You already have your price confirmation. Now when people talk of pump and dump, you can just confidently smile in return.

Good day Haejin, After buying the book and studying it for a big part. I made a NEO chart . It only differs with yours. If you have time, and I understand if you do not. Can you see what I have done wrong ? Wave 3 is not the shortest wave 4 does not overlap with wave 1. But I am thinking still need to do some studying on corrections? Even if you do not respond I wish you a very pleasant day!

Thank you very much for this update Haejin. Upvoted.

Buying more here on the dip. Store in a Ledger Nano S and collect GAS! Folks this is the way to get great passive income. 5 year hold for me

Please Haegin can you tell me what to take some profits on ... I am out of longs.. lol no seriously. I need to get fiat into space quicker..