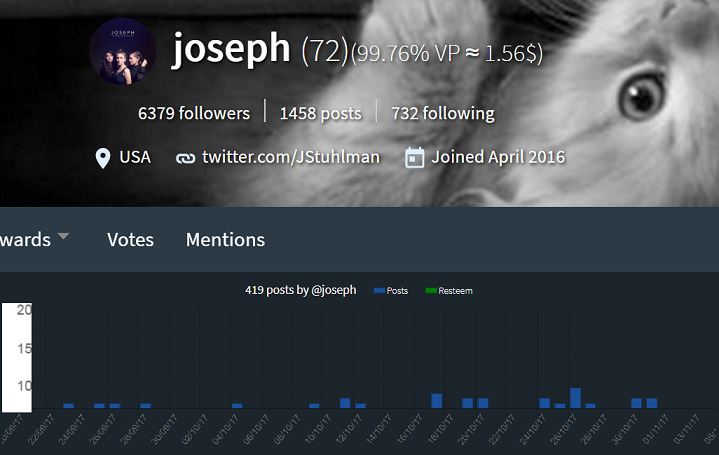 Joseph is a prolific poster, with 13 pages of original posts on his ChainBB home page. He’s known for bringing some off-color humor to the platform, delivering his witness reports via dubbed North Korean propaganda video (r/Pyongyang style), and having recently claimed responsibility for phallic artwork in “I Drew The Dicks”. Somewhere in there, there’s a “Superbad” joke. Don't tell Gtg about this one.

Joseph has covered a wide variety of topics on his blog, including humor, chemistry, politics, cryptocurrency, and Steemit current events...and of course, he does seem to enjoy the North Korean topic!

Joseph sponsored two contests to send two Steemians, @BarryDutton and @SaraMiller, to Steemfest 2 in Lisbon. In each case, the prize was $1000 SBD. A testament to their popularity, the contest posts themselves turned a profit, even after paying out the contest winners and curation (this was a revenue-positive giveaway.) 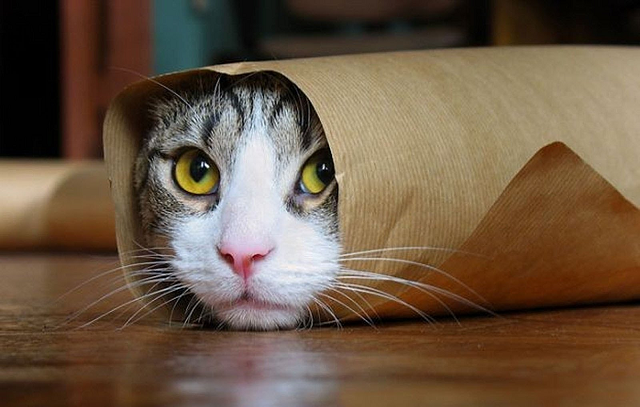 Burrito cat was locked up for a sponsorship deal.

Joseph is a notable detractor of, JerryBanfield, whom he strongly implies is “fake” (along with his followers, apparently) and “a self-absorbed loser.” Joseph goes on to attack Jerry for outsourcing tasks to other Steemians better suited to completing them than himself. I don’t understand this complaint. Does Joseph make his own butter?

I'll let him phrase it in his own words: Quit flirting and tell us how you really feel.

In the past, I know Jerry has paid Steemians for post transcripts, technical witness assistance, and I assume help with videos and equipment. He paid me for research. How is this a bad thing? Surely, we must drive out such malice as Jerry’s, post-haste! Such opportunity-sharing within the community is a dangerous precedent. If this continues, we may be forced to endure content that is neither produced by outside advertisers, nor filmed on ShakyCamDark! (patent pending)

Joseph is also a Peerplays witness.

If you have any additions or errata for this post, please let me know! I will see that they are voted to the top of the comments, and will make the appropriate edits (if possible).

Try SteemFollower today and get rewarded for every vote and follow!

Join us at the Minnow Support Project! (click me)
We also have a Radio Station! (click me)
...and a 5000+ active user Discord Chat Server! (click me)
Almost 80% of Steemians do not vote! If you wish to make me your witness voting proxy, I will attempt to vote in Steem's best interest based on the information in my witness reports. You may set me as your proxy by clicking here and scrolling to the bottom of the Witness Voting page. Proxies are instantly revokable at any time.

Nice posts @lexiconical !
How do you find all the information about each of the witness, do you mostly discuss with them or just investigate through their profiles?

I use a number of tools to get all my information.

I peruse their blog, from the beginning, via ChainBB to avoid resteems. I search for discussion about them, or mentions in the comments. I try to read their opinion pieces and highlight a topic they have a strong opinion on, or that they may find interesting. (In Joseph's case, it was his post on Jerry.)

I also use @Drakos' tool to check the health, version, and stats of their witness:

I ask other Steemians if they have any knowledge. If the witness belongs to one of my communities (or chooses to contact me), I'll include any information they provide. If they have edits or changes after I post, I will fairly consider them and add or retract as necessary, up to the 7-day edit restriction. Indeed, it wouldn't surprise me if Joseph chose to comment here and respond to my snark.

Thanks for a relevant question.

@lexiconical
I have a question which is not related to this post, I hope you don't mind!!
My question is that, if we buy a vote from any bot within the first 30 minutes of a post, do we keep the curator rewards as well?

I prefer to attempt to trigger bots when they will give rewards to my curators, but that also means I've taken losses on several of my bids. With the timing cycle, you can't really choose when the votes come in, and sometimes you post an article and simply don't have time to wait around, curation window or no.

Some bots, such as MinnowBooster, are beginning to implement post age limits for this reason, and I think that is beneficial as I am 100% for increasing the viability of curation, particularly on lesser known authors. Trying to encourage my readers/voters with large curation rewards is one of the main reasons I futz with all these timed-bid voting bots.

I think this is the best explanation I've come across! Thanx.
Best wishes, - @splendorhub

He has certainly been around longer than I have.

yes.but i have seen you have done here well in a small time

A quick check of his blog will show that he's doing much "better" than I am.

I hope you will also do better as like him.. From now I will follow you continue @lexiconical

I appreciate your support and compliment!

Actually I want to learn from you senior guys. That I want to follow you and some senior. Please keep me in your remember. @lexiconical

Yes, he is definitely a long-time user with a very high reputation.

This for this post will try my luck out there but Is the cash withdrawable, can it be convected to real cash

Please elaborate on your question. Is this spam?

This post has received a 19.47 % upvote from @buildawhale thanks to: @lexiconical. Send at least 1 SBD to @buildawhale with a post link in the memo field for a portion of the next vote. The @OriginalWorks bot has determined this post by @lexiconical to be original material and upvoted(1.5%) it!

Thanks For Your Good info.

This wonderful post has received a bellyrub 20.76 % upvote from @bellyrub. Please make sure to vote for my pops as a witness @zeartul,Here

Congratulations, your post received one of the top 10 most powerful upvotes in the last 12 hours. You received an upvote from @bellyrub valued at 48.20 SBD, based on the pending payout at the time the data was extracted.

Congratulations @lexiconical, this post is the second most rewarded post (based on pending payouts) in the last 12 hours written by a Hero account holder (accounts that hold between 10 and 100 Mega Vests). The total number of posts by Hero account holders during this period was 260 and the total pending payments to posts in this category was $3165.57. To see the full list of highest paid posts across all accounts categories, click here.

Ask permission for translate to my language Indonesian.