Understanding Steem, for New Users Only!

Are you confused by all the terms we have on Steem like voting power, Steem Power, vote weight, etcetera? Would you like to have a simple explanation about how all this works on Steem? 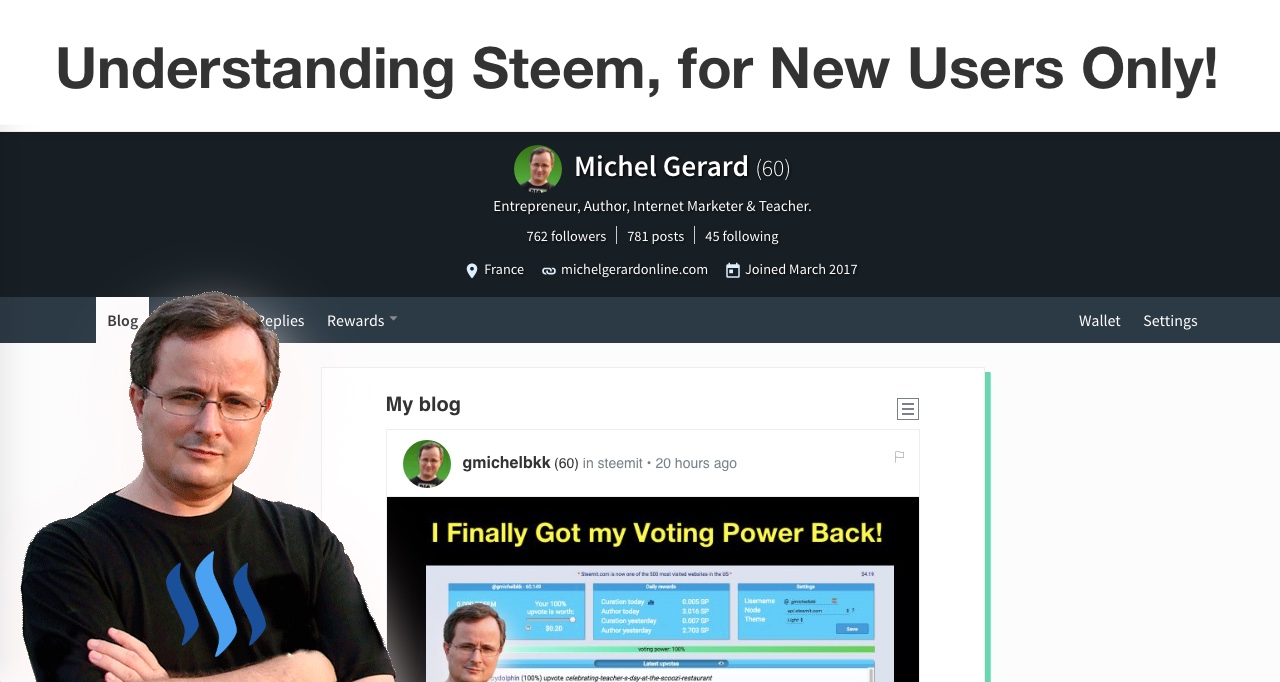 Someone asked questions about this in my previous post and I realized that I had the same issues understanding Steem when I started. I thought that writing a post may help new users and I encourage you to click on the links in this post as they direct to useful information.

Understanding Steem, for New Users Only!

Here we go, you are new on Steem, you want to make some money and participate on Steemit the best you can, but there are some terms that you quite don't understand.

The main confusion is with Steem, Steem Dollars and Steem Power.

Do we really need three kinds of Steem?

Let's see what they are.

Steem is a cryptocurrency like Bitcoin or Ethereum with its own blockchain. You can hold Steem in your wallet on the Steemit website, in a desktop wallet or on an exchange such as Bittrex or Poloniex. You can exchange Steem with another cryptocurrency instantly to transfer that in USD. You have the possibility to power up your Steem, which I will explain later.

SBD is supposed to be a stable currency pegged to $1 USD, but as we have seen recently its value can reach $10 plus as it all depends on the market. Nethertheless, there is a mechanism that will prevent it from falling below $1, so SBD increasing in value is a good thing. You can also hold or exchange SBD instantly in another crypto in exchanges like Bittrex or Poloniex. You can also use Steemit's own market to exchange SBD into Steem and Steem into SBD.

Steem and Steem Dollar can be used completely on exchanges as a storage of value or speculation, and it has little to do with blogging, commenting and upvoting on Steemit.

Steem Power or SP is the fuel to run your blog on Steemit. The more Steem Power you have, the more influence you can have on Steemit. You need a minimum of around 10 Steem Power for your account to run smoothly and much more to really start to have fun.

In order to have Steem Power, you have to power up your Steem. After that, you can't withdraw your Steem Power right away and you have to power down, which is a process that will give you back Steem over a 13-week period. You can't exchange it on exchanges, but you can delegate it or receive a SP delegation.

How does Steem Power works with voting power and vote weight?

You can use the upvote calculator here to see how all this works: https://steemnow.com/upvotecalc.html

So, how do you lose voting power?

You lose it when you go crazy upvoting all kinds of posts using more than what you have, like upvoting 20 posts at 100% vote weight, for example.

The voting power could be compared to the energy level of a character in a video game, which is going down as he performs some actions and has to be recharged to continue playing.

I Finally Got my Voting Power Back!

A Tool to Monitor your Reputation, Voting Power and Steem/SBD Prices.

What is Reputation on Steem?

Your reputation depends on the age of the account, the number of posts, comments and upvotes you have. It is a score that evaluates the amount of value you have contributed to the Steem community.

Users on Steemit look at the reputation scores often to decide if it's worth the time to read a blog post because higher scores are usually a sign of better quality content by experienced users.

The higher your reputation is, the more effect your vote will have on the reputation of others. When another user upvotes your posts or comments, it increases your reputation score. Users with a higher reputation will have more of a positive effect and this goes hand in hand with their Steem Power.

I hope that  this post is useful for you to get started with Steem on Steemit.

I always thought high SP increase your reputation, not the other way around.

SP can help advance your score faster, but you will notice that some whales with lots of SP who like to bully others with punitive downvotes for good posts, just because they don't like an opinion or someone, have often no posts and low reputation, even negative reputation.

I guess it's okay that we just focus on SP rather reputation. And like in the real world, some people are so easily offended that they downvote or flagged posts of others for no rhyme or reason. It's a wild wild west on Steemit.

When you post good content, your reputation goes up each time so I concentrate on increasing my SP.

You explained it in a simple and easy way. It really helps a lot of new steemians to understand steem, steem backed dollar and steem power. Thank you so much @gmichelbkk for making this post..

Just love the simpler way your posts give us the important facts about Steemit, so essential in learning this complex platform! Happy to tweet this post :)

Are you confused by all the terms we have on Steem… twitter.com/i/web/status/9…

Thank you very much @andy4475 for your kind words and the tweet!

You have explained everything in very good and simple way. Really informative post for new steemians like me. Thanks for sharing, All the best @gmichelbkk

I am glad that the post is useful for you.

Thanks a lot for this very thorough explanation about the currencies of Steemit! I know I still have a lot to understand, but at least everything makes more sense now.

For a beginner such as myself, grasping this was definitely a challenge, so I'm truly thankful to you for making this post. :)

Thank you very much @cruziana, I am glad that the post is useful for you.

It really is! Please continue making posts like this, I know I still have more to learn from this platform! <3

Great article Michel! I'm sure many people will benefit from this. Maybe you should consider writing some more Steemit guides. You're doing good job at it.

Thank you @cryptoist for your kind comment. I like to what these guides, what I need is more ideas of what would be useful to write.

We are all trained by facebook and youtube where it doesn't matter how many votes we have. This was a really good explanation on how steem works.

Thank you very much, I am glad the post is useful for you.

Thank you @innervision for your question, it is actually USD and today for example, it is worth $0.25.

Go here to play with the calculator: https://steemnow.com
And if you want to know more where this is coming from, you may want to look at the Steem Economics section of http://steem.guide

You got a 3.33% upvote from @postpromoter courtesy of @gmichelbkk! Want to promote your posts too? Check out the Steem Bot Tracker website for more info. If you would like to support development of @postpromoter and the bot tracker please vote for @yabapmatt for witness!