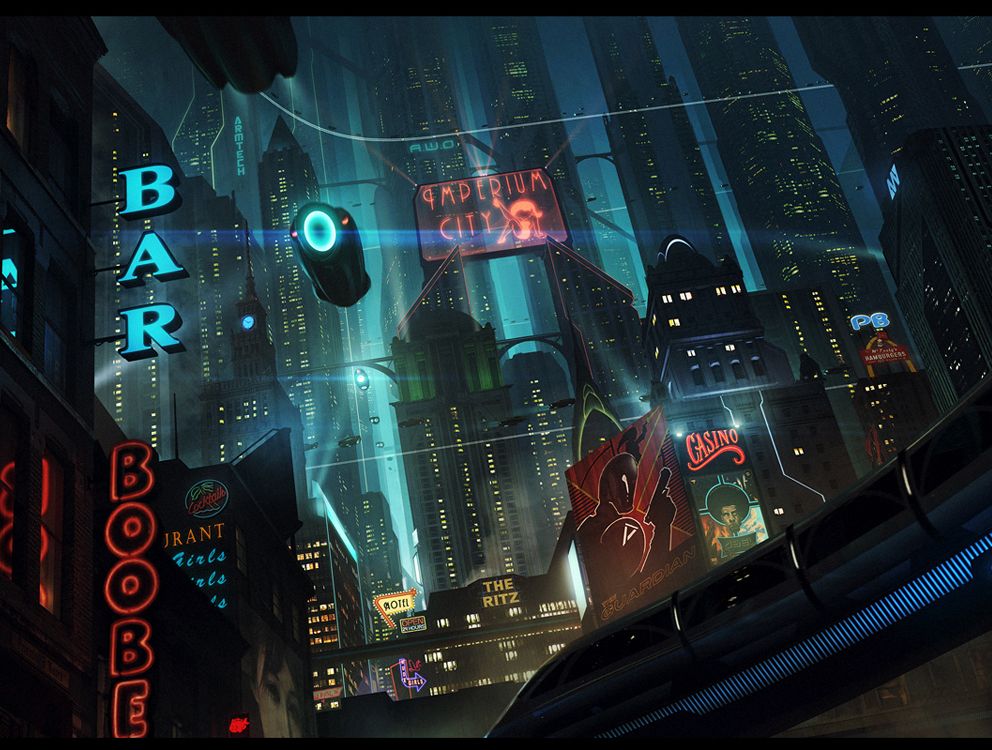 Willow stared up at the endlessly ascending buildings on both sides of her as she sat on a bench. They reminded her of the Grand Canyon she once seen and what it would look like if its walls had been squeezed closer together. Above the towering buildings she could see the bottoms of Hovercars zipping in and out of view as they passed over the crevice of the two buildings. She also watched the occasional drone zip above the traffic near her like bullets flying through the air. Even the cars moved hastily left and right in front of her and every once in awhile one would autonomously pull into the pickup lane and stop for a waiting person. Behind her she could hear crowds also hastily going to and fro about their business. Some people were simply just standing about chatting and others were stopping by various vendors and kiosks. Willow was sitting there soaking it all in when a guy's voice echoed throughout her head snapping her out of her daydream. This voice was the result of a brain implant called a Neural Lace which most people in this society possess.

"You have one new message from Gavin" the voice said. At exactly the same time words overlaid the uppermost part of her vision displaying the message. The message from her friend Gavin said 'I would love to hang out with you today, but I have to finish my paper for the Young Thinkers Assembly. I promise though later today we will definitely go to the Virtalcinama to play the new Zombiezamia story, o and by the way HAPPY BIRTHDAY!'. She smiled and via her thoughts replied to the message 'Awesome! I can't wait! It's going to be so much fun. P.S. I also can't wait to see your paper. Good luck!'. Along with the written message Willow also sent a vibe message which contained the feeling of excitement followed by a rush of serenity. These feeling would be replicated in the recipient via their neural implant. Willow looked up to see the city lights slowly dimming in preparation for the night that was gradually approaching. Even the crowd around her to seem to be slowly dwindling. She decided it would also be best for her to start heading home.

The Transpod jerked to a stop and its door made a whooshing sound as it opened. An automated voice said "Welcome to sector Orange#245". Willow made her a way out of the Transpod and quickly looked back through the glass behind her just in time to see the Transpod bolt away. Willow made her way to the front door of her home. She swiped her hand in front of the door handle and the door made a clicking sound. She proceeded to open the door which revealed a pitch black room. Some things however near her were illuminated by a green glow which protruded from her skin. Via her thoughts she had the lights come on which revealed a delightful surprise.

"HAPPY BIRTHDAY!" screamed two figures which emerged from behind a dark blue velvet couch across the room. Even before Willow could see the faces of the two figures she knew that they were her sister Nicole and the friend of the family Bolt. Bolt was an older generation of robot and lacked any human looking skin and many of the other advanced human features other newer robots possessed. However his body had a human frame and he had a gentle character which couldn't be matched by any other robot. Willow knew him since birth and in fact he's been apart of her family for many generations before her. Then there was her older sister Nicole. Nicole was almost a year older than her and they both shared the same blue eyes. They also both had amber orange skin which both of their parents lacked but decided they would choose when selecting Nicole and Willow's attributes.

Nicole was a wonderful sister and was always fun to be around. Nicole and Bolt sang Happy Birthday as they slowly emerged from behind the couch. Bolt was holding a birthday cake that had white frosting and that was outlined with purple frosting on its edges and that was topped with the number 17. The candles flickered as Nicole and Bolt made there way across the room.

"...happy birthday to you" they sang as they made it over to Willow. Willow blew out the candles. Afterwards Nicole sat the cake down on a table nearby and pulled something out of her pocket that was small and wrapped in wrapping paper. Willow walked over and sat on a couch that was closer to the door.

While handing Willow the wrapped object Nicole said "This came earlier today. It's from mom and dad". The object was fairly large in the palm of her hand and she could feel that it was uneven and bumpy underneath the paper. On the wrapping paper there was a stunning colossal of colors which spilled across its surface creating nebulaeand stars which sparkled throughout. The paper was filled with various shades of purple,orange,and blue along with many sparkling white stars. Hanging off the paper there was a tag which had the words "Happy Birthday! From mom and dad" written on it. Willow teared open the wrapping paper. As she broke into the wrapping paper she could see the object inside twinkling in the light of the room. Underneath the paper was a partly translucent orange crystal which resembled amber but that felt more like glass. The crystal sparkled across its uneven surface.

Willow replied excitedly "They must of got it from Arcadus!". Arcadus is the name of a planet which is 10 million light years away from Earth and very close to the area their parents were staying. It is a planet which is almost entirely made out of orange crystals. Willow's and Nicole's parents were going to a summit between Earth and an alien planet called Florix.

"Ive sliced up the cake. What pieces do you guys want?" Bolt asked standing near the table.

"I'd li-" Willow started to say before Nicole interrupted.

"Thank you Bolt, but I actually have a surprise I'd like to go show Willow"

"If I told you it wouldn't be a surprise now would it" she replied playfully. Nicole got up and made her way to the door and Willow followed.

"You two have fun but be back by ten" Bolt called after them.

If you enjoyed this writing you will probably enjoy these articles too.
- Futurtopia#4 - Problems with the Singularity?
- Futurtopia#3 - How blockchain will revolutionize the world!
- Futurtopia#2 - Living forever?
- Futurtopia#1 - Neural Lace (How Society Will Change)

Interesting story. Here are some suggestions. I'm not a writer so take it with a grain of salt :). I did notice a lot of punctuation was missing throughout the chapter. Keep up the good work.

Thanks for the suggestions :)

you're welcome. followed you back.

Nice story, I can't wait to see what Arcadeus looks like. If I may make a recommendation, maybe putting the dialogue lines in their own line, separated from the paragraph, would make it easier to read. I got lost a couple of times. Haha.

I'm glad to see more action in #sciencefiction, we're a smaller tag but our authors are very good. ^^ We are running a contest on techno-horror short stories to try and gather more interest in sci-fi, and it seems like it would be right up your alley. I invite you [to take a look.] (https://steemit.com/writing/@aguayojoshua/cryptails-an-anthology-from-the-blockchain-issue-1-technological-horror-contest)

You got me interested un checking out your articles too. Thanks for sharing!

Awesome! Thanks for your suggestion. I will defiantly check out the contest.

Np! I look forward for your entry if you decide to participate ^^