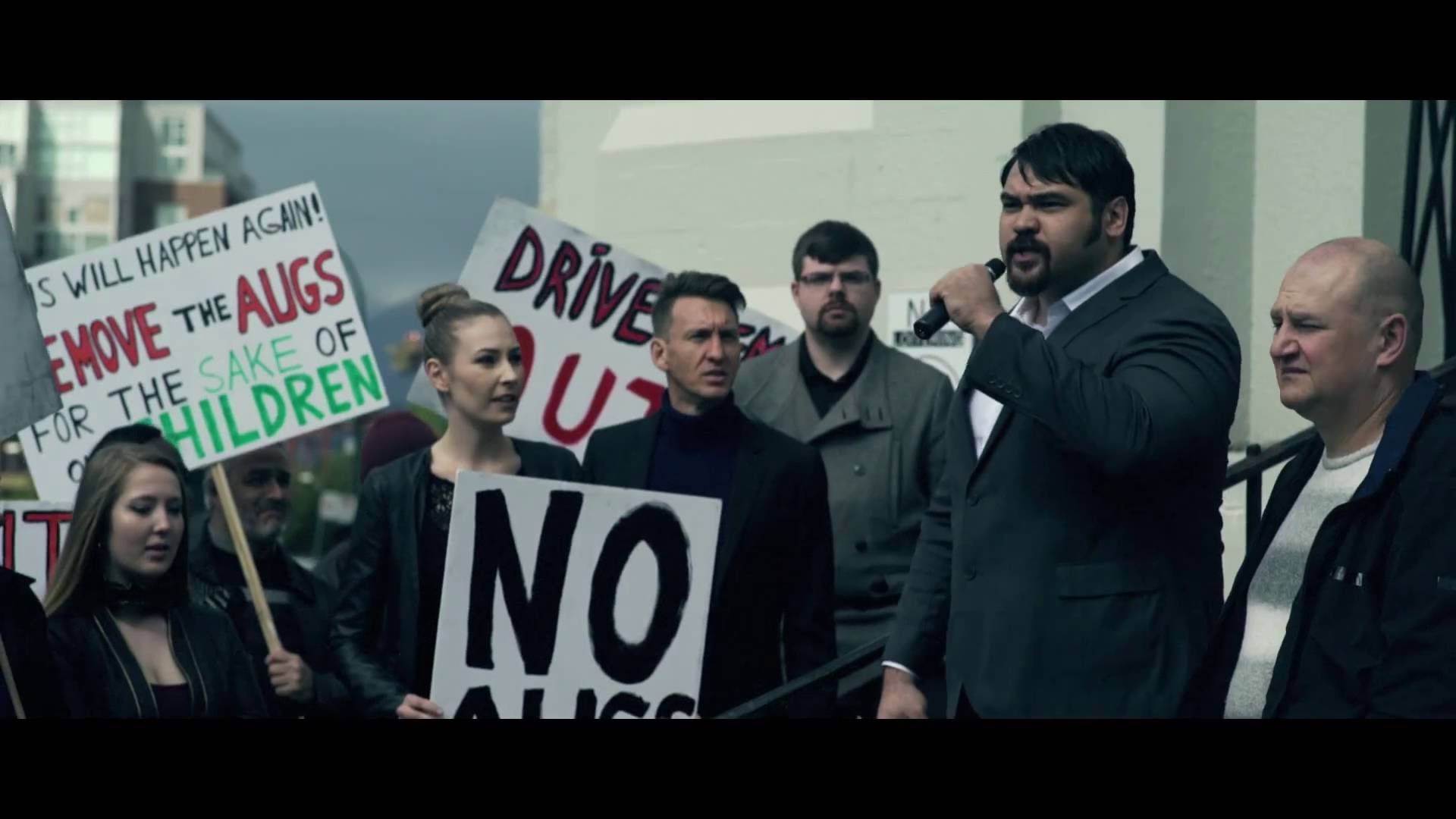 This is a sci-fi story I am currently writing for fun. I have already posted previous chapters which can be found at the bottom of this page. If you have any suggestions to improve my story in someway then leave a comment down below :) .

A guy behind her giggled "What's wrong?" Willow slowly turned around. "I'm not gonna hurt you,I promise" She looked over and saw a spherical drone floating next to a boy who was smiling. The boy looked about her age, his hair was blond, he had olive skin; a moderate brown, he was quite skinny and had golden eyes. He was wearing a smooth black and grey CrownedNeck Shirt. His shirt had a high collar and the inside of it was grey and his shirt had long arms with grey cuffs and the shirt was bonded to together at a slight angle to the right. On his back was the gun he had earlier. His dark grey pants reminded her of the time she saw an onion being peeled into many thin pieces; specifically the exact memory of the onion rapidly exploding as it was pressed down. That's what his grey pants looked like except it had less peels at the top of his pants and the amount grew as the image repeated down to his grey boots. His clothing seemed to be made out of bioplastic similar to the material people wore where she lived. Bioplastic is basically a plastic which is really flexible and is made so heat can be released or trapped based on its a charge given.

"Well im guessing your not from around here are you?" the boy said.

"What gives that away?" Willow replied nervously.

"I don't know…...maybe your orange skin and your clothing" Willow was wearing a white dress that looked like a hybrid of a dress and a regular shirt. The dress went down to her knees. On the bottom of the dress it looked as if there were many flaps almost feather like curling out from the dress and the amount of curls lessened as it continued to the very top of the dress. The dress created a v which went down past the chest and under the dress was a very light pink shirt which looked like it was made out of a porous material. Willow was also wearing smooth grey shorts.

"Well if you want the exact answer it's punishable by eternal imprisonment and torture" Spoke up the drone next to the boy. The drone looked old and had black blemishes and random scratches on its metal surface. It also had a noticeable dent near its top next to its eye which was a black bulge that stared right at willow.

"Really Jet! Are you trying to scare her or something" The boy said sternly to the drone.

"What? You would of told her anyways"

Ignoring Jets remark the boy continued "I'm sorry if I scared you earlier Jet and I were just doing some shooting. Are you ok though it looked like you fell pretty hard back there…..um you're actually bleeding." The boy was looking down at Willows legs. Willow looked down and saw that both of her knees were scraped up and one of them was bleeding. Blood was dripping down her leg and she could suddenly could feel pain that was coming from her knees.

Willow wincing at the pain made a slight groaning sound " Ugh that kinda hurts" The boy quickly dashed up the stairs to her and grabbed her under her arm before she was able to wobble to the ground.

"We need to get you clean up" The boy said helping Willow down the stairs and over to the location where he was shooting the gun earlier. The circular room had two long flat old wooden benches which sat on separate sides of the room. In between the two benches was a long wooden rectangular box which had dead plants poking out of the dirt it held. The room was being lit by a spherical drone similar to the light drone she had. The boy helped Willow settle down onto the bench next to them. He then got down on his knees and grabbed a bag which was underneath the bench and pulled out a cloth and a small grey spray bottle.

"I actually haven't told you my name yet have I" He said as he used the cloth to wipe the excess blood off her knee where she was still bleeding slightly. "You can call me Quinton. What's your name?" Quinton used the cloth to put pressure against her wound causing Willow to wince with pain. "Sorry about that" He said.

"Well nice to meet you Willow and of course you've already met Jet" Willow looked past Quinton to where she last saw Jet. Jet was past the plant box in front of her and resting on the bench on the other side of it.

"What is he doing over there?"

Quinton glanced over to where she was looking at. "Don't worry about him he'll warm up to you. The thing is Jet never has really been around anyone else besides me. I guess he's just kinda jealous." he said while he sprayed some kind of sanitizing solution on Willow's wounds and dressed the them.

"But hasn't Jet been around your family?"

"No not really….the thing is artificial intelligence is outlawed where i'm from. I actually found him here in the Savage Land and helped repair him."

"Why would artificial intelligence be banned? Thats terrible."

Jet quickly flew above the plant box and chimed into the conversation "Finally another person besides Quinton who agrees with me!"

Quinton quickly retorted "Well that's not necessarily fair to say though. I'm sure a lot more people would agree if they weren't threatened with eternal imprisonment" Willow cracked a smirk making Quinton realize what he just did.

Willow said "So Jet wasn't lying was he!"

"Well….. Yes he wasn't actually lying but I just didn't want you to run off and then get caught and then you know"

"It's ok I get it you were just trying to protect me."

Willow due to her enhanced hearing could hear Jets voice coming from what looked like a earpiece in Quinton's ear. "That's not the only reason wasn't it? Your heart rate was literally racing when you first started talking to her. You like her don't you" Quinton quickly looked behind him at Jet to most likely to give a glare and then he looked back at Willow.

Willow tried her best to keep herself from chuckling and said " Anyways…. earlier you called this place the Savage land. Why is that?"

Quinton answered "Well people say that this level separates us from what they call the Cyborgs. The reason why it's called the Savage Land is because there is a legend which says that a long time ago there was a war between people called the Nyborgs and people called the Cyborgs. Basically what happened is the Cyborgs wanted to improve the human race and make it into something completely new. This is said to have ended in them losing their humanity and trying to destroy the Nyborgs or in other words the humans who were still human. It's said that the Cyborgs pretty much become emotionless savages but were held back by the Nyborgs. Well that's what everyone seems to be taught anyways. You seem to be doing pretty good though for a savage"

"Well thank you. You look pretty good for a human"

Jet interjected "Don't you two start flirting. I have a question for you Willow how did you even get down here? There's no way we missed a passage. We looked in every nook and cranny. I even had to go through some very cramped pipes and let me tell you that is something i'm never doing again.

Willow replied "There was a doorway that opened and then I went down some stairs" Willow could hear a faint buzzing somewhere in the distance.

Jet continued "What do you mean a doorway. We checked everywhere near here and we never found a doorway leading up before." Willow could hear the buzzing getting louder and louder.

"Do you guys hear that?" Willow said

"What a sec are you talking about that buzzing?" Jet asked

"What the heck why are there so many!"

Quinton questioned "What the heck are you guys talking about?"

Jet quickly answered "We need to go it's the Orderbots!"