RIPPLE crashed by $14.5billion from Sunday’s high with its price rapidly falling towards the dollar mark today. Here is the latest Ripple price news and live updates on XRP, bitcoin and Ethereum. Ripple’s XRP cryptocurrency is hovering just around $1 today - far below its high of $1.41 on Monday.

The digital currency’s market capitalisation spiralled down to about $41billion, according to CoinMarketCap.

Most of Ripple’s crypto rivals, including bitcoin, are also struggling today with the only main exception being Ethereum (ETH), which has appreciated by about two percent.

Here are all the latest Ripple updates from CoinMarketCap, CoinDesk and leading crypto experts.

Despite a day of falling prices, Bitcoin has started to climb once more in the last hour.

A Facebook ban on cryptocurrency advertisements had rattled the markets earlier today.

The dismal figure is the lowest price that Ripple has suffered this year, beating another low two weeks ago when on January 17 when it was $0.97. 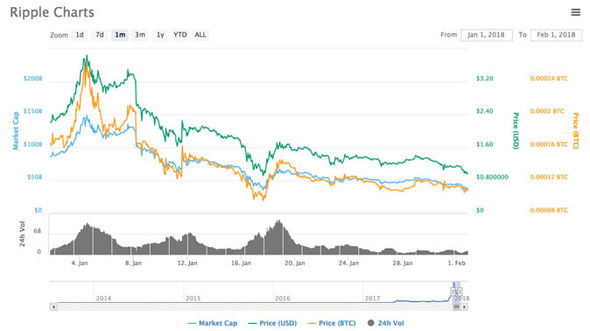 Miles Eakers, chief market analyst at Centtrip, is now expecting more pressure on the token to result in prices falling down to $8,000.

He said: “Driven by talks about likely increased regulation, Bitcoin’s woeful start to 2018 continued today. Bitcoin has again fallen below $10,000 a coin, far from its record price of $19,891.

“The drop followed comments made by India’s Minister of Finance, Arun Jaitley, that the Indian government ‘does not consider cryptocurrencies legal tender or coin and will take all measures to eliminate use of these crypto-assets in financing illegitimate activities or as part of the payment system’.

“We anticipate there will be more of such protectionist regulation. This is likely to put Bitcoin under more strain, causing it to drop to the $8000 a coin level.” 5.23pm: India threat ‘not enough to crack’ the crypto market

Cryptocurrency investor Oliver Isaacs is not convinced that India’s threat of cracking down on cryptocurrency will have devastating effects on the markets.

He said: “With cryptocurrencies and blockchain technology going from strength to strength despite the volatile market conditions, I feel India’s threat to ban cryptocurrency will not have the devastating effects that some people are suggesting.

“A ban is unlikely to decrease the speed at which digital currency is moving, given the unprecedented growth in other countries, who currently show no signs of going down the same path as India.

“Blockchain technology, which is decentralised is a large and complex entity, which cannot be tamed by the actions of individual countries or single organisations, as we saw with Facebook banning Cryptocurrency adverts earlier this week.

‘Blockchain is revolutionising the way the financial world operates, with many positive benefits for society and organisations across the world and I have a feeling India will reverse their decision soon just like South Korea recently did.”

Ripple prices fell to $0.97 amid a turbulent day on the crypto markets

5.07pm: Tracking cryptocurrency performance is ‘not good for your health’

He said: With other speculative investments, like private equity and venture capital, you can't check your phone every five minutes.

However with cryptocurrencies, investors are able to “track the minute-by-minute value of it”.

Mr Smigiel added: “Looking at something with such high volatility all the time is not conducive to an investor's mental health.” 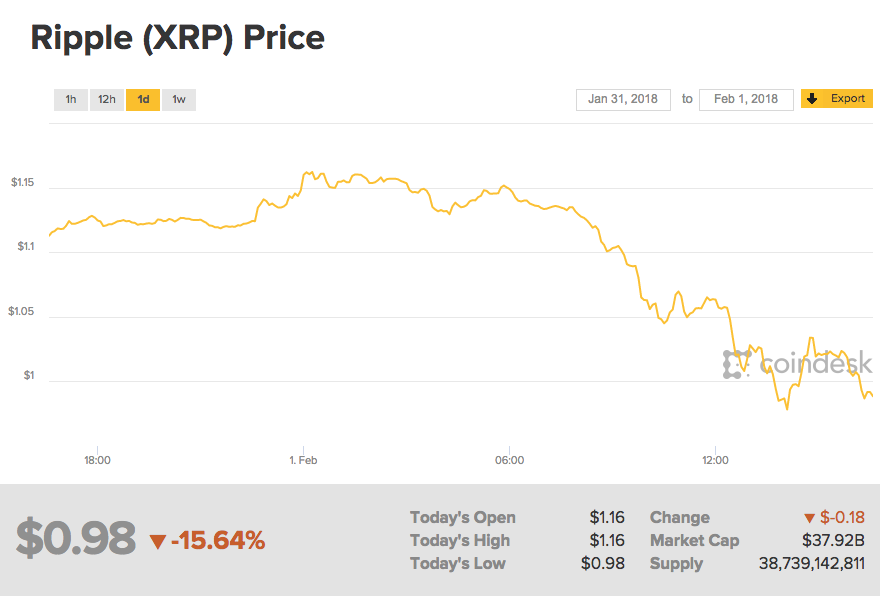 Naeem Aslam, chief market analyst at TF Global Markets is not concerned with the growing pressure from regulatory bodies.

He said: “Regulatory pressure is only a blip.

“Speaking with investors, they are comfortable that now we have some regulatory framework around this, this doesn’t deter them but only foster their confidence in the technology.”

However some are fearful that India cracking down on illegitimate bitcoin use is adding unneeded uncertainty to the crypto markets.

Andrew Se, co-founder of research website Cryptoprofile.com, said: “News about India potentially cracking down on cryptocurrencies added to an already bad week in terms of headlines.

“We’re still correcting as the rally had gone too far." He said: “Panic is in the air. When tensions run this high, it’s always best to take the long view. Accept that we’ve entered a bear market for cryptocurrencies.

“Will it last? Only for the cryptos that were meaningless, to begin with, I’d say. So stick with value plays, such as XRP and Ethereum.

“At present, we see no reason to alter our $10.00 Ripple price prediction for 2018. However, that may change if regulatory conditions change for the worse.”

His comments come in the wake of India’s Finance Minister Arun Jaitley cracking down on the illicit use of virtual tokens.

Mr Kirk said: “Lots of news regarding regulation is causing the market to panic.”

The crypto expert added: "We think ethereum will outperform bitcoin by a country mile.

"We think the war between bitcoin and bitcoin cash is having a negative effect on bitcoin sentiment."

Ripple price LATEST: XRP is now trading at a low price of $0.98 according to CoinDesk

He said: “Ripple's XRP token is taking a beating amid a broad losses across the cryptocurrency markets.

“The price of XRP fell to a two-week low of $0.99 today, according to CoinDesk's Ripple Price Index.

“The XRP/USD exchange has depreciated by 11.86 percent in the last two hours, indicates CoinMarketCap.”

Ripple is now trading hands at $0.98 per token, today’s lowest price so far, according to CoinDesk.

XRP dipped under the dollar mark this afternoon - the first time it has fallen below the threshold since January 17, according to CoinMarketCap.

The global delivery service is reportedly turning its attention to blockchain technology, having joined the Blockchain in Transport Alliance (BiTA), according to Coin Delite.

FedEx’s vice-president of strategy and analysis Dale Chrystie said: “We have millions of records stored in our system, and we think blockchain is a secure chain of custody that could transform the logistics industry.

“We believe its promising and would streamline all that data exchange in a very secure way.”

The Indian Government will no longer consider cryptocurrencies as legal tender, it has been announced.

He said: “The government does not recognise cryptocurrency as legal tender or coin and will take all measures to eliminate the use of these crypto assets in financing illegitimate activities or as part of the payments system.”

Cryptocurrencies like Ripple, bitcoin and Ethereum will not be banned in South Korea, the Government has announced.

The clarification will be welcome news to investors because South Korea is such a major hub for crypto traders.

Finance Minister Kim Dong-yeon said: “There is no intention to ban or suppress cryptocurrency market.”

However, he made it clear that the Government still plans to introduce crypto regulations in the near future.

Australian crypto exchange Coinjar has rolled out support for Ripple, Ethereum and Litecoin as it looks to embrace Altcoins.

The company announced it a statement: “Over the past few weeks, we’ve progressively rolled out trading of Ethereum, Ripple and Litecoin to CoinJar.

“Adding alternative coins to our exchange has been our most requested feature to date. Thanks to your feedback, we decided not to just add Ripple (which won our Twitter and Facebook poll), but to add Ethereum and Litecoin too.

“These three altcoins are currently some of the largest, and most mature digital currencies in the market right now.

“They are all built upon the same basic foundations of the decentralised network Bitcoin was also founded upon, but they do have their differences.

A spokesperson for the cryptocurrency insists Ripple is capable or erecting some of the flaws that have blighted its rivals.

On its competitors, he said: “In addition to being slow and costly to use in transactions - taking anywhere from an hour and $30 to settle - these digital assets also use an incredible amount of energy because they are mined.

“XRP, on the other hand, is designed to settle quickly - in seconds; inexpensively - at fractions of a penny; with minimal energy consumption.

“This is because XRP transactions are validated through a process called consensus, versus proof of work - mining, which bitcoin and Ethereum rely on.

“As a result, XRP doesn't consume much more energy than a regular server. XRP is the only digital asset out there that does, as far as I'm aware.”

XRP’s price may be sliding, but Ripple officials will be pleased with the number of businesses who have signed up to the service recently.

Ripple CEO Brad Garlinghouse has made it clear that XRP is a cryptocurrency that can be used to assist established financial institutions rather than replace them.

Congratulations @vinay-negi! You have received a personal award!

Congratulations @vinay-negi! You have completed the following achievement on the Steem blockchain and have been rewarded with new badge(s) :