Four years ago, on the Fourth of July we set out on a Quest to develop BitShares.
This year, we are kicking off the Billion Hero Challenge.

Unfortunately, I can't talk about that today because we now have a world-class New York City Marketing Firm telling us not to publish anything on a holiday. Even if it's only observed in America. I guess that's progress.

So, instead I will concentrate on our plan to make the Fourth of July a holiday for everyone.


Global Independence Day!
Some people expect there to be market fireworks today, but there were no fireworks on July 4, 1776. Skirmishes had been happening since the Boston Tea Party the prior year and the battles continued for many long years afterwards. But Americans still celebrate the Fourth of July.
It's because that's when we made our intentions very clear.

I'm not sure which Fourth of July will be remembered more, 1776, 2013, or 2017? It doesn't really matter, the struggle will no doubt continue. As Thomas Jefferson once said,

"The tree of liberty must be refreshed from time to time
with the BitShares of patriots and tyrants."

...or words to that effect.

And so on this Fourth of July we have added 3,000,000 BTS, more precious than blood, to that noble cause. The cause of freedom.

Where did we get that number? Three million BTS was worth one million dollars when BitShares first gained 100x above its all time low five month's before. That forms the new base on which we will build another 1000x of growth this decade. Our puny million dollar sacrifice to freedom in the billion-hero-prize account will quickly grow to become a billion dollar juggernaut in a trillion dollar platform that the no power on earth will be able to resist.
Like a rolling stone. These days our freedom is most in danger from those who control our money. "Give me control of a planet's money and I care not who makes its laws," they still believe. Our goal is to motivate humanity to take back control of their own money. To join us in deploying honest money and a level playing field in which to spend it. A playing field where would-be tyrants can no longer gum up our economic machinery and siphon off our prosperity. We plan to start lighting brushfires of freedom everywhere.

"A way to secure life, liberty, and property" was the stated goal when Dan Larimer set out on the quest to develop BitShares on July 4, 2013. That is still what we are doing today. Then, Dan aimed to deploy overwhelming technical firepower. He succeeded and continues to succeed in that arms race. Today we add even more awesome marketing firepower.
And the gates of Hell shall not prevail against it!

So you may not see many fireworks in the BitShares markets today. But we have just fired another shot heard around the world.

Do you feel that butterfly flapping its wings? You surely will.

Stan Larimer, President
Cryptonomex
The Godfather of BitShares and the HERO

Here are some of the best links for inquiring about us:

The Video
By far the best resource for new people is our “TED Talk” in front of a live studio audience in Hollywood. Everyone loves it for some reason. There is no better way to know all about us in one sitting.

https://bitshares.org/ - Features of BitShares Overview
http://www.sovereignhero.com/ - A collection of information about the Hero currency offered on the BitShares platform.
http://www.sovereignhero.com/thehero/
http://docs.hero.global/en/master/ - Great documentation
https://steemit.com/eos/@trogdor/eos-vs-ethereum-for-dummies - EOS is the growth path for BitShares and the Hero
http://docs.bitshares.eu/_downloads/bitshares-financial-platform.pdf

Elevator Pitch
It's about Honest Money. The hero is a stable, fast, appreciating market pegged asset that is backed by the equity of the platform which manages it. No counter party risk like other currencies backed by government debt or gold that may or may not be in a vault. And it grows, by definition, by 5% APR against the dollar. The Hero is borrowed into existence by someone who uses BTS as collateral - like a home equity loan uses your house as collateral. Except you can sell, trade, spend or hold the Hero like a coin.

So... block.one sells some of their 750,000 ETH to buy BTS and then borrows HERO to shelter their capital reserve from ETH volatility. Surely Dan and the block.one dev team + shareholders see the need to diversify out of the very asset EOS replaces; BTS + HERO provides the perfect means to do so. If block.one starts today they should get us to $10 BTS in about a month.

Think of the howls!

Oh yes - it would close the circle in the most perfect way imaginable. Not to mention provide a case study and working example that many other ICO titans could follow (cough Bancor cough)...

With you, @stan! I don't have millions, but I have a passion for decentralized money and honest government. I've been watching this latest market crash very closely, and it has become plain to me that the derivative coins in the bitshares universe, as well as coins like $SBD have held their value thru this crash. The market maker who backs the derivative coin is at risk during a period such as this, but market makers sign up for that role. They have a lot to gain once it all takes off. The market is just too volatile for mom and pop to get into it, but stability is not impossible. The HERO can be that stability.
I have a Billion Dollar Idea...

Back then, it was like the sketch in Back to the Future, when Marty McFly was playing the guitar with a futuristic tune - and the audience wasn't quite ready. But now people are ready to listen...

Reading you write about creating unmanned comapnies just makes you my kind of captain. I am an ROV Pilot Tech and the whole unmanned stuff just excites me, but seeing what happens with your kind of new unmanned creations makes me wish you were my commanding officer and I will gladly follow you to the ends of the world. Good thing you are doing this and making good change in the world.

Hey, @stan, we need to talk ASAP what you are doing with BITSHARES is right up our ally perhaps we can set a time to connect in our Discord Group

We have just upvoted this POST specifically with 100% of our Voting Power and we plan to do the same with ALL Future Posts you make here.

ADSactly is a Grass Roots Cooperative Economic System that is acting cooperatively with many blockchain projects.

Excellent info and got some great comments. BTS for the win

I can not express in words how happy I am I discovered bts in the early days. I am not from the people who made money with bts since most of the times i was on the wrong side of the trade and i had some bad lucks as well but irrespective of my loses this system is beyond money and I will always be a supporter! May BTS with the use of HERO and smartcoins change the world to a better place where people actually hold honest and true money and do not have the illusion of holding their hard worked moneys on centralized thiefs.

This graph makes no sense, 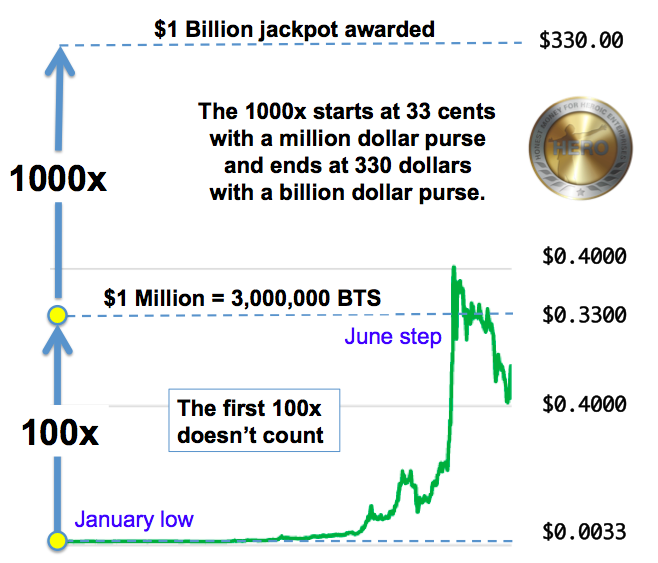 See on the left where it shows the 1000x, then between that and the hero token it provides an explenation?

Stan - I found no book about Bitshares on Amazon. I was thinking about authoring one. It could cover Bitshares, SteemIt, MarketHero, and other Graphene projects. Do you have any advice on who I could interview to start that? I'm a good cross between a techie and a writer, with accounting, law and 35 years of various businesses. Had my picture made with you and Michael in Los Angeles.

Cool. Best that exists is two years out of date:
https://www.amazon.com/BitShares-101-Generation-Currencies-Decentralized-ebook/product-reviews/B00QUIWHR0

Thanks, but strangely enough, if you type in Bitshares in Amazon.com, that book doesn't come up. Ah, but it doesn't have an "Order Now" button, or when I click "buying options" it says page cannot be found. So it seems to be a review page for a book that no longer exists.

I'm just starting to learn about the bitshares, steem and EOS connection. I'm very pleased to see the philosophy of freedom that guides what you do. Thank you!

I hope this will prove to be the day that we begin to take back the control of our money and therefore ,our lives. No more printing more money until it is worthless, no more bank accounts with negative interest.

Very impressive. When you have time, please come to Mars. It's so different there.

But Mars ain't the kind of place to raise your kids...

Congrats on your success and good luck! 🙃👍🏻

There needs to be a change from this method. Watched the "Ted Talk" last night and starting down the rabbit hole.

May we remember this day when money became honest again. Thank you for leading Stan.

could you link for us the ted talk related?

It is the Heronomex Launch Announcement linked in this article.

What is "Ted Talk?" Would like to see it.

The link is in the original post here from Stan. It is a presentation called Heronomex.

Did you find anything worthwhile in it? Because all I saw was a sales pitch and a known miscreant, aka "Murderistic" at Bitshares forums, take the stage. I also saw Yogi bear pictures and numerous Star Trek images to go with the grandiose, unsupported claims.

This is not doing anything to calm my skepticism.

The bit about holding bitshares in escrow as a hero coin is created made sense. I can see some traders taking advantage of that lending protocol.

It's definitely interesting enough that I want to know more, but I've read about people being on the wrong side of forced...liquidations, I guess you'd call them... of their positions, even with the highest collateral option.

It is certainly possible, and you are wise to do your due diligence.

Unlike Bitcoin, BitShares has the fundamentals to back it, because it can scale and SmartCoins have solved the volatility issue that plagues every other cryptocurrency and prevents true merchant adoption.

Yep. Do you think that there is at least 19x as much wealth outside bitcoin that could be served if we reached out to it with a coin like HERO?

Made me chuckle when I read that Thomas Jefferson once said, "The tree of liberty must be refreshed from time to time with the BitShares of patriots and tyrants."

I'm glad you guys are picking those special dates to infuse some extra energy into the liberation process Stan. Looking forward also to the birthing of EOS and how bitshares will be fused with it once the time is ripe ;-)

glad i bought bitshares at 5 cents!!! so much potential and one of my top altcoin picks!

5 cents? Well done. I only wish I knew about bitshares when it was that price :)

In the future you'll be saying. "Glad I bought when it was only .25"

I like how you guys chose the day to replace the spoiled patriotic message.

can it be converted to btc

Sure, using the exchange, you can convert Bitshares to Bitcoin. https://bitshares.org/technology/decentralized-asset-exchange/

Extremely well written, sure upvote. Thanks for the information. Check out my blog to find out lots of how to guides to buying crypto like BTS.
LL

Still difficult for me to believe this is happening, can't wrap my mind around it, but slowly..... it's getting through 🐓🐓

allot people dont understand market!
i do and have invest bitshares!!!
We change the world
greetingsss